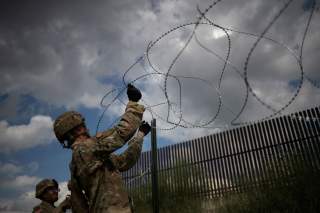 On Thursday the Trump administration announced emergency measures to prevent people who enter the country illegally from claiming asylum in the United States. The idea is to prevent people from circumventing immigration check-points only to surrender themselves to the authorities once on U.S. soil. These changes come on top of informal "go slow" policies at border crossings that have seen crossing times rise from hours to days.

The American Civil Liberties Union and the Center for American Progress have already called the new measures "illegal," and maybe it is—that's for the courts to decide. But it is necessary. You just can't run immigration policy on the basis that anyone who shows up at the border and claims asylum should be let into the country.

The international asylum system is premised on an assumption of honesty and goodwill that simply no longer holds. Of course, genuine refugees with a claim to asylum under U.S. and international law still show up at the border. But now everyone else has learned—or been taught by immigration advocates—that they, too, can turn up at the border and claim asylum. If they do, they get a free pass to live in the United States until their cases are heard.

And that can take years. Successful asylum cases usually takes three to four years to decide. Unsuccessful applicants then face deportation hearings, which, on average, take another two years. So all told, a typical illegal economic immigrant seeking to work illegally in the United States can ride the system for five to six years, with help from immigration activists.

Then comes the painful process of trying to deport adults who have since had children in the United States, or whose young children have spent half a decade in American schools and no longer speak their parents' native languages. Those young U.S. citizens and "dreamer" children have strong claims to remain in the United States, and if they are to remain, how can you deport their parents?

It's time to stop lying and face the reality that the asylum system has become a shadow immigration system. Immigration advocates and activists are complicit of subverting the rule of law in society in the name of due process for individual cases. The constitution guarantees due process. So maybe it's time to change the law.

Asylum abuse is relatively new in the United States, but we don't have to look very far to see what happens when an asylum system breaks down. All we have to do is look to Europe. On August 24, 2015, Germany's Chancellor Angela Merkel announced an open-door policy for refugees fleeing the wars, crime, and poverty of Africa and the Middle East. A mere three weeks later, on September 13, she tried to shut it again. To no avail. Once word got out that the route to Europe was open, hundreds of thousands of people were already in motion and determined to squeeze in at all costs.

The result was a two-year crisis that almost tore the European Union apart as more than one million refugees poured into Europe in 2015 alone.

In 2016 and 2017, the EU was forced into ever more aggressive tactics to turn back the flood. They paid North African countries to arrest people trying to leave, and paid Turkey to take back people who made it in. Norway even had to close its Arctic border with Russia to bicycle traffic, because refugees were using bikes to skirt rules prohibiting pedestrian crossings.

Now it's America’s turn. The first waves of more than 5000 refugees have set out from Honduras, Guatemala, and El Salvador bound for Texas. The main body is now gathered in a stadium in Mexico City for much-needed rest and recuperation while waiting for stragglers to catch up.

That these people are genuinely suffering back home in Central American is not in doubt. Nearly all live in extreme poverty, their children lacking any real educational opportunities. Many face violence from criminal gangs and even their governments. Some may qualify on that basis for asylum in the United States. But the reality of the migrants' suffering doesn't mean that they should necessarily be first in line for entry into the United States.

In Bangladesh, an extremely poor country with a record of violence and dispossession, roughly 8 million people apply every year for the chance to resettle to America through the diversity visa program, widely known as the "Green Card Lottery." Throw in another 2 million Nigerians and a million Ukrainians, and you get some idea of the numbers of hard-working people who want nothing but safety, security, and educational opportunities for their children.

People in all three of these countries routinely face the kinds of pressures that afflict the Central Americans in the migrant caravan making its way up from Mexico. Because they can't walk to the United States, they have to wait in line at consulates, make their applications, and wait for the results. It might be a good idea for the United States to set up a refugee processing center in Central America, but it's a terrible idea for that processing to be done at the border.

That's because a single crack in the border wall will bring millions of immigrants flowing in, just as it did in Europe three years ago. Thousands would die trying, just as they have in Europe. And within a few weeks, the United States would be looking to close its borders again, just as Europe did. That's just not the right way to run refugee policy. We can always do more to save the world, but opening the border isn't the way to do it.