The Hidden Benefits of Great-Power Conflict with China and Russia 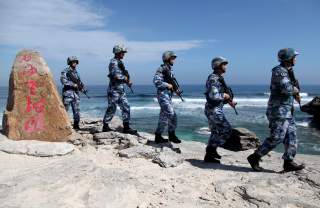 The fact that practically all serious security threats facing the West have moved to the gray zone is a positive thing. This means that most—if not all—threats that the western states are confronting are nonmilitary in nature. This development has reduced the probability of war breaking out between western states and their adversaries. This is a new development as many western states have overused their militaries during the post–Cold War era to the detriment of other tools of statecraft.

“Gray-zone conflicts,” “hybrid warfare,” “political warfare” and “competition short of armed conflict” have become mainstream ways to frame and conceptualize contemporary threats facing the United States and its allies and partners in Europe. The western outlook to gray-zone conflicts accentuates daily dangers which over time corrode western shared understandings, narratives and institutions. According to the western reading of the situation, the tools at the disposal of today’s gray-zone actors vary from information warfare specialists to internet troll farms and offensive cyber actors.

One key theme which unites many gray-zone conflict oracles is the focus on nonmilitary tools with malign intent. As the Secretary-General on NATO Jens Stoltenberg noted already in 2015, “Hybrid is the dark reflection of our comprehensive approach. We use a combination of military and nonmilitary means to stabilize countries. Others use it to destabilize them.” As Stoltenberg noted in his speech, the combination of military and nonmilitary tools to advance one’s interests dates back thousands of years. Why, then, are we so surprised by the fact that Russia and China—and perhaps some other significant actors as well—are conceptualizing, formulating and executing their security strategies in a way that assigns importance to military and nonmilitary tools? Moreover, how come we are surprised by the fact that the overt use of military force is seen by Russia and China something that should be avoided? Isn’t it smart for any actor to achieve its goals without recourse to the use of large-scale violence? Being able to achieve one’s goals with diplomatic, information, economic, financial, intelligence and law enforcement tools without the use of military force—using all other means than the military within the DIMEFIL model—is a result that should be commended. It is a goal that any smart actor within the international system should strive to do.

Today’s international system is competitive. This is a fact. But it has been competitive for almost all known history of human beings and the social groups they have formed. From an international security perspective, the two decades of the post–Cold War era—roughly between 1989/1991–2013—were an extraordinary time. During this period the West—North America and Europe—faced no serious security threats in the military or nonmilitary spheres. It was a time of “the unipolar moment” and supposedly “the end of history.” It was during this period that an expanding NATO made a paradigm change by neglecting Article 5 and going out-of-area in search of a new mission. The United States led the way by going “abroad in search of monsters to destroy”—from Somalia, Haiti and Bosnia to Afghanistan, Iraq and Libya. And soon enough, many western states had their hands full of real hard security threats—if not against the states themselves, at least against their deployed troops in operations. During this time, in a matter of two decades, many western states used military force loosely outside of Europe trying to manage almost irrelevant security problems with air power, precision weapons, first-class intelligence, surveillance, and reconnaissance (ISR) technology and—ultimately—by deploying ground troops for counterinsurgency warfare without clearly stated political goals or any significant chance of success. For years sunk costs mattered more than potential future “victory” when western states deliberated new rotations of forces to these operations. Bosnia, Kosovo, Afghanistan and Iraq have defined the western approach to international security and strategy for more than two decades. Continuously ongoing warfare, operations and campaigns somewhere “out there” have become a normal state of affairs—“the new normal” within the West.

Thus, during the two decades of the immediate post–Cold War era, western states redefined their take on international politics, international security and war. This happened at a time, when western (read: American) power had reached its zenith. This time was really an aberration in the long history of relations between states. Unfortunately for the West today, past formulations of security and military operations were based on shaky—even faulty—foundations. They were based on wishful thinking and overtly optimistic future projections about the ability of western states to remain at the top of the international pecking order of state power without being challenged by anyone, anywhere at any time. It was during these two decades that the collective western delusion about the new “rules of the international security game” emerged. And based on this delusion, many western states reformulated their defense policies and national military forces. As we have witnessed during the post–Cold War era, many western states—led by the United States—have intervened in the affairs of other states militarily to an unprecedented degree. Many political problems have been securitized and militarized—seen to require military responses.

The overtly expansive and even militaristic security policy orientation that developed and matured within the West during the post–Cold War era has now collided with very traditional great-power outlook of Russia and China. Although the military power at the disposal of the United States has suffered from almost two decades of constant warfighting, it is still second to none, and continues to be for a long time. However, the policies of Russia and China have turned out to be at odds with the definition of international security that was fostered by the western states during the post–Cold War era. The western-dominated international security agenda is not accepted by Russia or China. And due to long-term efforts to strengthen their military forces, Russia and China today need to be taken seriously. For the West, it is unfortunate that the best way for Russia and China to increase their power position and standing in international politics is to attack the existing western-generated internationals security order and its rules of the game. And the easiest way to do this is to use all tools of statecraft—although scarcely relying on the use of military force. The overt use of military force reflects the failure to influence others with other—more “economical” tools.

Supposedly, China and Russia have been operating—even waging war—below the radar for years now. I argue that many western radars have been wrongly calibrated during the post–Cold War years. It is precisely the “noise” in international politics that states should be concerned about. War is—and should be—an aberration. Other methods of statecraft are—and should be—constantly used in order to achieve politically defined outcomes. Radars calibrated only for high-intensity military threats and warfare leaves western statesmen equipped with meager tools to advance their interests.

Much of the western gray-zone talk has been caused by the surprise that Russia’s action in Europe and China’s actions in Asia have caused. Suddenly, during the early years of this decade, states within the western security community were not able to define the rules of the international security system on their own terms. Indeed, the actions of Russia and China have made the return of great-power politics very visible within the international system. It is understandable that the loss of the international pole position has caused distress and anger within the West. But putting things into perspective, it would be hubristic to assume that for an extended period of time western states could have exclusive rights to delineate the logic and rules of international security. Today it is obvious that the unipolar moment is over. The sooner that this sinks in, the better. Realizing this is a prerequisite for devising policies that can serve western security interests.

The western discourse on the negative or threatening aspects of the ongoing Russian and Chinese gray-zone operations is based on a faulty understanding of statecraft or grand strategy. After all, grand strategy can be understood as a “collection of plans and policies that comprise the state’s deliberate effort to harness political, military, diplomatic, and economic tools together to advance that state’s national interest.” Grand strategy thus reconciles aspirations or ends with means. As we have seen during the last two decades, in most cases the use of military force serves the national interest poorly. Not only does the use of overt violence mobilize active resistance, it also practically in all cases also leads to unintended consequences that are difficult, if not impossible, to manage. What we in the West call gray-zone conflicts or “hybrid warfare” is, in fact, Russia and China advancing their national interests with normal—albeit not always with benign—tools of statecraft. The presupposition that international relations are always benevolent in nature (as they were for some years after the end of the Cold War—at least for the western states), and that great powers of the day refrain from using malign tools of statecraft when seeking to fulfill their national objectives would be naïve at best—dangerous at worst. We should be pleased with the fact that China and Russia are highly focused on the tools below warfare. This makes war between Russia or China and the West more unlikely. Thus, gray-zone competition is a good thing. Competition is a normal feature of international politics.