Hong Kong, Ukraine, and the Rise of the Global South 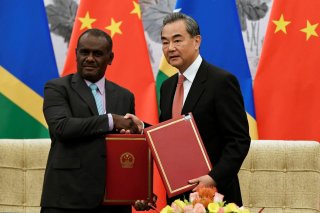 On July 1, 1997, the world witnessed the return of Chinese sovereignty over the city-state of Hong Kong after 156 years of British rule. For the first time in 500 years, Asia was free from any European colonial presence (Macao, which passed from Portuguese to Chinese rule in December 1999, was informally under Chinese control already for two decades).

In the last few weeks, many articles have focused on this anniversary and the changes that have taken place over the past twenty-five years. This is understandable considering China’s ongoing violations of fundamental freedoms in Hong Kong, an issue that the European Parliament addressed in a resolution passed in January.

What is largely missing in the debates about Hong Kong—a city in which traffic signs are written in an order of English above Chinese—is the “weight of history.” Hong Kong was ceded to Great Britain after the First Opium War of 1839-1842, an act of military aggression carried out by British authorities against China due to the emperor’s decision to make opium illegal and tighten prohibitions on drug use. In this sense, in Ralph Arnote’s words, the Hong Kong enclave is in many ways “a prize of British colonialism.”

From the perspective of millions of people in Asia, it is first necessary to shed light on this background and how British authorities profited from opium by degrading the health of local populations for centuries. Being aware of how often these aspects are omitted—they are rarely discussed in London or other Western capitals—can help Westerners understand the reason why the ongoing calls for “rights and freedoms” are perceived by many as instrumental, if not superficial.

The example of Hong Kong serves as a reminder that the scars of history take on different contours when approached from the perspective of the Global South. The thirst for freedom and justice is present at all latitudes (and particularly among peoples under dictatorial regimes), much less so the awareness regarding the deepest roots of some major contemporary issues.

Upon closer inspection, these numbers and the considerations expressed so far say a lot also about why only a few countries—where about 16 percent of the world’s population lives—have placed sanctions on Russia for its ongoing aggression in Ukraine. While aware that the war in Ukraine is an illegal and immoral invasion, the political representatives of most of the world’s population (not just “some autocratic countries”) are increasingly critical of the global financial system (95 percent of global monetary reserves are held in Western currencies), and believe that the time is ripe for a rethinking of the global order and the “weight of history.” The G7’s gross domestic product, measured by purchasing power parity, represented only 31 percent of the global total in 2020 and is expected to fall to 29 percent by 2026. This development represents how these dynamics are being accelerated further.

In light of all this, we might now wonder which world awaits us. The war in Ukraine has pushed European states to embrace NATO's agenda and interests, while many countries in the East have chosen to be part of a growing geopolitical order driven by BRICS countries (Brazil, Russia, India, China, and South Africa). The latter will foster, among other objectives, a “selective re-globalization” representing a macro-regional reconfiguration of the world economy that will dilute the dominance of the U.S. dollar, and mitigate the reciprocal sanctions imposed by leading economies.

The collision between these two world orders will continue to produce localized collisions and general disorder, in as much as no player or alliance will be able to, in the foreseeable future, achieve world hegemony or anything resembling “Pax Americana.” The Russo-Ukrainian War will remain a semi-frozen conflict for decades that will threaten international stability and periodically instigate renewed clashes.

In any war, there are losers and winners. The former will continue to be poor and marginalized people, and, more than ever, the environment. The winners will mainly be the arms industry and the circles of power that gravitate around them which have always relied on unidimensional narratives that speak to the instincts of the people. After all, as George Orwell once said, “[e]very war, when it arrives, or before it comes, is represented not as a war but as self-defense against a homicidal maniac.”

Lorenzo Kamel is a Professor of Global History at the University of Turin, and the Director of the Istituto Affari Internazionali’s Research Studies. He authored nine books, including Imperial Perceptions of Palestine: British Influence and Power in Late Ottoman Times (2015) and The Middle East from Empire to Sealed Identities (2019).