How America’s Immigration Restrictions Succumbed to the Coronavirus 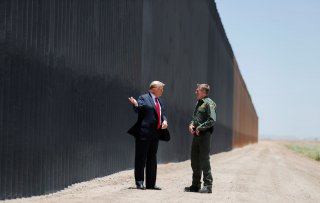 There are many actions of the Trump administration that a Biden administration (assuming he wins in November) should reverse. President Donald Trump’s limits on immigration should, however, be retained and even strengthened, although urgent action should also be taken to make procedures at the border more humane. This suggestion may seem a completely pointless one given the present atmosphere in the Democratic Party, but anyone with a sense of history and a sense of the interests of U.S. workers (of all races) has a duty to think about it.

The need for new progressive thinking on immigration is due to the likely long-term effects of the economic crisis stemming from the pandemic, which also seems likely to reinforce further tendencies towards automation and the replacement of secure and permanent jobs with insecure and temporary ones. The U.S. unemployment rate in May had already climbed to 13.3 percent, a decline since April but still the highest level since the Great Depression of the 1930s; and, of course, U.S. official figures notoriously fail to include the semi-employed and those who have dropped out of the jobs market altogether.

Projections of prolonged unemployment at present levels may be exaggerated. On the other hand predictions of a “V-shaped recession” followed by a quick and complete recovery seem wildly optimistic, given the massive financial losses suffered by key economic sectors, the disruption of international trade, and the likely long-term shifts in consumption, entertainment, travel and work patterns. There seems to be a high likelihood of long-term unemployment levels far above the norm of the past generations. Low-paid and part-time workers are likely to suffer the worst of all.

If we are facing a future of high unemployment, then a continuation of high levels of immigration will be nothing short of political and economic madness. The backlash against immigration has already helped lead to Trump in America, Brexit in Britain, and the steep decline of centrist political parties in Europe. In times of deep mass poverty (probably including large sections of the former middle class), democracy itself could be in danger.

In the 1930s, U.S. liberal democracy and U.S. capitalism were saved by President Franklin Delano Roosevelt and the New Deal. Other countries were not so fortunate; and we also need to remember that the Great Depression took place at a time when immigration to America was highly restricted, due to the Immigration Act of 1924 (replaced in 1965). It is worth considering what the political reactions of Americans in the 1930s would have been if mass immiseration had been accompanied by mass immigration.

The 1924 Act has got a justifiably evil name for racism, and immigration quotas based on race must be absolutely excluded. Legal immigration must be strictly color-blind, by law. However, such quotas are not at all the same thing as quotas based on economic need and safeguarding the position of existing American workers.

As far as certain limited and selective categories of skilled immigration is concerned, these should continue. There is however a very strong case for doing everything possible to strengthen America’s own creation of the necessary skills, especially in regions of high unemployment. State financial bailouts of U.S. universities after the pandemic should be made contingent on their doing much more to provide cheap and appropriate technical education to U.S. citizens, as opposed to milking international students for fees and encouraging far too many American kids into economically and intellectually worthless four-year degrees, payment of which will either cripple them financially or will be passed on to the state.

New limits on immigration must be linked to the grant of citizenship to illegal migrants already in the country – but not at all in the way that the Republican Party has done in recent decades. On the one hand, long-term illegal residents must be naturalized; anything else defies both morality and common sense.

On the other hand, as Michael Lind and others have been arguing for many years, this is only politically possible if existing citizens are assured that much more effective barriers to illegal immigration have been put in place—whether you call these a “wall” or something else.

Before meeting these suggestions with instinctive rejection and outrage, liberals in general and the Democratic Party leadership in particular need to ask themselves some tough questions:

In circumstances of high unemployment, are there in fact any remaining valid economic arguments for high immigration?

What responsibility do they and should they feel to existing U.S. workers, and in particular the poor and low-skilled (among whom minorities are disproportionately represented) whose jobs, wages and conditions are most affected by immigration?

Is support for high immigration compatible with a defense and strengthening of trade unions, especially for the lowest-paid? Have U.S. employers not gone on the record in declaring that immigration in general, and undocumented immigration in particular, are very useful tools for busting trades unions and reducing wages?

Can the Democrats afford to allow the Republicans to monopolize this issue in future election campaigns, as they most certainly will do? Will it be possible for the Democrats to win back working-class voters and create the broad national support necessary for radical programs like the Green New Deal while continuing to advocate mass immigration?

If enough Democrats can ask themselves these questions, and enough Republicans can shun Trump-style racist paranoia, then it may be possible to have a sensible national debate on immigration. If not, and the economic impact of the pandemic, and the long-term effect of climate change, prove as severe as many have predicted, then I fear that America, and the West, are in for even more troubled times than we are seeing already.

Anatol Lieven is author of Climate Change and the Nation State: The Case for Nationalism in a Warming World, published by Oxford University Press in April 2020.