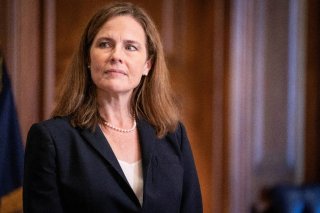 Senate Democrats threw a temper tantrum, staging an all-nighter on Capitol Hill Sunday night as they protested Judge Amy Coney Barrett’s ascension to the Supreme Court. At this point in Barrett’s confirmation process, her future on the nation’s highest court is perhaps definite. Senate administrative staff report that a vote is expected around 7:30 p.m. Monday night, followed by a swearing-in ceremony at the White House hosted by President Donald Trump.

Democrats remain powerless in this fight, as all but one Republican Senator—Sen. Susan Collins (Maine)—will be voting to push Trump’s third nomination to the Supreme Court before the presidential election that’s eight days away.

“Barrett is part of what will be a longstanding legacy of the Trump administration: producing a major change in the ideological balance in the federal judiciary and especially the Supreme Court,” Robert Y. Shapiro, a professor and former chair of the department of political science at Columbia University, explains.

Barrett’s lifetime appointment would establish a 6-3 conservative majority on the bench, which has sparked concerns among Democrats about the future of abortion rights and the Affordable Care Act, or Obamacare. The court is expected to hear a case relating to the Obama-era law after Election Day, where its existence is potentially in jeopardy as Barrett has publicly opposed the law. A number of Democrats contend that filling the Supreme Court seat with a conservative such as Barrett during a pandemic would risk health care protections for millions of Americans.

“A vote for Barrett is a vote to strip health care from millions of people. It’s a vote to turn back the clock on reproductive freedom,” Sen. Elizabeth Warren (D-Mass.) said. “To endanger Dreamers and immigrants. To let climate change rampage unchecked. To imperil efforts to address systemic racism. To place workers’ rights, voting rights, L.G.B.T.Q. rights, and gun violence prevention at risk.”

Some experts suggest that although Barrett’s confirmation has been a pressing issue heading into the election, the Senate’s vote to place her on the court will not have much of an impact on the race for the White House, since more than 61.5 million Americans have already voted. “I don’t think the Barrett confirmation vote will much affect the results of the 2020 presidential election. I have two reasons for thinking that,” Kevin R. Kosar, a resident scholar at the American Enterprise Institute, notes. “First, more than 61 million voters already have cast their ballots. Second, I do not get the sense that there are many undecided voters out there. The only possible effect we might see is some disaffected conservatives, those who have been disappointed by Trump for various reasons, might feel incentivized to vote rather than stay home.”

Barrett’s confirmation could potentially energize some Republican voters in crucial swing states who prioritize the pro-life abortion stance to back Trump and his efforts in pushing Barrett to the Supreme Court due to a sudden new urgency to support a conservative-dominated bench.

“The effect of the nomination on the election is pretty set at this point,” Michael Hanmer, government and politics professor and research director of the Center for Democracy and Civic Engagement at the University of Maryland, says. “Both sides made their case and I suspect most potential voters know there is little the Democrats can do to stop the nomination. The net effect is hard to parse out without a focused study. On the one hand, Trump sent a strong signal to his base about the types of justices he can appoint. On the other hand, the Democrats argued about a power grab and threats to issues, like health care, that are at risk if Barrett joins the Supreme Court.”

Kosar also said her confirmation could “elicit retribution from Senate Democrats” as polls suggest that GOP senators’ seats are under fire in the upcoming election.

“One thing that remains to be seen is whether Barrett’s confirmation will elicit retribution from Senate Democrats. They are poised to increase their seats in the chamber, and if they have enough they may decide to abolish the filibuster for legislation—which would make the Senate more majoritarian,” he added.

Control of the upper chamber is at the forefront of this election, and Republicans have received pushback from voters over confirming a Supreme Court nominee just days before the election and amid dueled health and economic crises. Both sides of the aisle have been unable to compromise and pass another stimulus package that would pump federal aid into industries and homes that are financially strained due to the pandemic.

If Democrats win control of the Senate and the White House, some legislators have been vocal about adding justices to the Supreme Court, or, to put it more precisely, packing it. Barrett’s confirmation also potentially adds to controversy over a tight election that winds up in the Supreme Court, namely, whether she would recuse herself from 2020 electoral and legal issues, a debate that “could get messy,” according to Hanmer. In the past, justices did not disqualify themselves from cases that included the presidents who happened to appoint them.

If Barrett is confirmed Monday night as planned, she could start as early as Tuesday, but she cannot participate in cases that are already being discussed.

“Supreme Court nominations are poisoning politics on Capitol Hill and in this country. This is due to the Supreme Court taking ever-greater roles in deciding public policy. Nobody has yet to figure out how to put that genie back in the bottle, although one thing that would help is reforming Congress,” Kosar said. “If our national legislature passed laws and settled policy disputes more often—which is its raison d’etre—then the Court would have fewer occasions to insert itself in public affairs.” So far, there appears to be little prospect of that.