How Biden Should Respond to a Russian Invasion of Ukraine 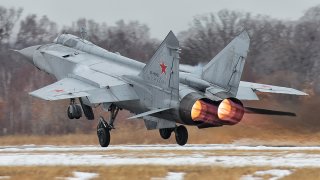 U.S. leaders are playing a dangerous game that might very well provoke an unnecessary and potential nuclear war with Russia over Ukraine and the destruction of the NATO alliance. The potential for escalation and miscalculation following a Russian invasion of Ukraine, leading to a full-scale war between the United States and Russia and the loss of tens of millions of American lives, has never been greater since the end of the Cold War.

Russia has reportedly amassed over 127,000 troops along with the heavy military equipment along Russia’s and Belarus’s border with Ukraine. Russia appears to have been greatly emboldened by America’s increasing nuclear inferiority to risk war with the United States and NATO in Eastern Europe. The incentive for the United States to negotiate a settlement with Russia is greatly enhanced by speculation that China may launch its own invasion of Taiwan, believing the United States to be too distracted by Russian aggression in Eastern Europe to respond.

In the meanwhile, in preparation of Russian aggression, the U.S. State Department has begun ordering embassy staff, their families, and 15,000 other U.S. citizens to leave Ukraine lest they end up stranded behind enemy lines. Further, the Biden administration should withdraw all 160 U.S. military trainers from Ukraine to prevent their deaths, even if accidental, from being used as a pretext for a U.S.-Russia war.

In addition, Russia’s latest diplomatic ultimatum demanding a written response to its proposed security agreement has expired, meaning Russia will likely retaliate. To this end, Russian experts have suggested such measures could include deploying nuclear bombers and nuclear missiles to the Americas, like Cuba or Venezuela, and stationing submarines 200 miles from Washington, DC, where they would be in a position to stage a decapitation attack to destroy the U.S. Capitol, as Russian president Vladimir Putin previously threatened.

In the United Kingdom, British military leaders warn that Russia will invade Ukraine as evidenced by the joint military drills Russia and Belarus plan to host on the Ukrainian border from February 10-20, 2021. These military exercises will likely act as a cover, the thinking goes, for a full Russian and Belarusian invasion of Ukraine which could occur during the exercises or immediately following their completion. Another consideration supporting the British belief is that the objective of a Russian invasion needs to ensure the capitulation of the Ukrainian government and its military forces before spring thaw in late March bogs down the mechanized arm of a Russian advance.

Prior to launching an invasion, Russia will likely engage in a massive, nationwide cyber first strike/surprise attack against Ukraine. This attack would focus on the Ukrainian government, its armed forces, and critical infrastructure such as the electrical power grid, internet, and other communication networks. This attack could knock out Ukraine’s Command, Control and Communications (C3) system and disable GPS satellites, rendering Ukraine unable to coordinate its defense. Further, such a cyberattack could shut off Ukraine’s gas pumps, effectively grounding its air force and immobilizing its army.

Such an attack would down Ukraine’s entire food and water distribution system and emergency services, resulting in a total breakdown of law and order and causing a massive increase in violent crimes, threatening the lives of millions of its citizens. Needless to say, such dire conditions would greatly undermine the will of Ukraine’s government and soldiers to resist the Russian invasion, perhaps motivating them to desert and go home to try to protect and provide for their families instead. The ultimate objective of this massive cyberattack would be to quickly transform Ukraine into a failed state and spark a popular revolt against the Ukrainian government as citizens to demand an end to the war in order to restore essential services.

Russia could also use GPS jammers and radio frequency weapons to disable Ukrainian air defenses and precision-guided munitions. It is also possible that Russian Anti-Satellite (ASAT) weapons may also be used to destroy Ukrainian satellites at conflict’s onset. These attacks could be complemented by Russian aerial bombardment to destroy Ukrainian air defenses while anti-ship missile units could decimate Ukrainian naval forces, thus solidifying Russian supremacy. Further, elite Russian Spetsnaz special forces, disguised as civilians or even as Ukrainian soldiers, could sow confusion behind enemy lines and paralyze Ukraine’s ability to resist a Russian “Blitzkrieg.” This will likely be followed by the use of Russian airborne forces to seize control of bridges and major Ukrainian airports.

Russian forces in Belarus will likely drive south to capture the Ukrainian capital of Kyiv and overthrow the Ukrainian government while Russian forces massed along Ukraine’s northeastern border would occupy eastern Ukraine to establish a land bridge connecting the Crimean Peninsula to the rest of Russia. In addition, Russian forces in Crimea and Transnistria could move on Odessa, the most important port for seafaring. If necessary, Russian forces in the north could move towards Transnistria to encircle Ukrainian troops that refuse to surrender. These hypothetical movements portray a rapidly subdued Ukraine that Western leaders may not expect and is similar historically to the German Blitzkrieg that defeated France within six weeks in 1940. If Russia is successful, the conquest’s expediency could increase its prestige and further divide NATO as many members may not wish to fight in an expanded war.

Assuming British intelligence reports are correct that Russia plans to install a pro-Russian government, the Ukrainian government’s overthrow in Kiev, within a few weeks of the invasion, would likely be followed by the formation of a Ukrainian government that acts as a sort of national salvation to restore law and order, as well as essential services for the people. This new government will likely be led by a former Ukrainian prime minister or first deputy prime minister, giving it a measure of legitimacy, who would sign a peace treaty with Russia, calling on the Ukrainian armed forces to cease all resistance. Russia’s objective in doing so would be to minimize a protracted engagement. Further, this hand-picked Ukrainian president might even enjoy considerable popularity and be viewed as something of a savior to the Ukrainian people because essential services would be restored after a signed peace agreement stands. Ukraine may then join the Russian-led Eurasian Economic Union and Collective Security Treaty Organization (CSTO). It would also sign a Treaty recognizing the Russian annexation of Crimea and give autonomy to the ethnic Russian majority regions of Eastern Ukraine. Ultimately, perhaps, the faux government may even sign a Union Treaty between Russia and Ukraine similar to the one Russia and Belarus signed that allows the free movement of Russian troops throughout the country, including up to NATO's western border.

Dr. Peter Pry, who currently serves as Executive Director of the Electromagnetic Pulse (EMP) Task Force on National and Homeland Security, has stated that Russia could take out 80 percent of the U.S. electrical power grid with a cyberattack. Hopefully, the catastrophic effects of a Russian cyberattack on Ukraine would serve to induce Biden to declare an emergency to reallocate tens of billions of dollars of unused Covid-19 relief and infrastructure funds to harden America’s critical infrastructure against a cyber and/or EMP attack that could kill up to 90 percent of Americans. Russia has threatened to break out of New START Treaty limits and deploy an even more massive strategic nuclear arsenal than they currently have. In response to this clear and present danger, Biden should take immediate action to re-deploy the 2,000 U.S. strategic nuclear warheads the United States has in reserve as a hedge against exactly this kind of contingency.

Recently, in July 2021, Putin published an article in which he essentially stated his belief that Ukraine should be reunified with Russia. Russian military doctrine states that even a conventional military attack upon Russian territory or against Russian forces will escalate to the use of nuclear weapons. Accordingly, any U.S. military intervention on Ukraine’s behalf or elsewhere in Eastern Europe could elicit Russian nuclear retaliation. In addition, Secretary of State Antony Blinken has threatened “massive consequences” if Ukraine were to be invaded, including “a swift, a severe and a united response from us and Europe.” Previously, he stated the United States would enact even more severe economic sanctions against Russia and provide increased military assistance, including offensive arms, to Ukraine. Right now, President Joe Biden is reportedly considering doubling the number of U.S. troops in Eastern Europe and may deploy more warships and aircraft to the region. Rumors swirl noting contingency plans to send up to ten times more U.S. troops in the event of a full-scale Russian invasion of Ukraine. More alarmingly, senior Biden administration officials suggest that instead of negotiating with Russia, they would consider funding and arming a Ukrainian insurgency if Russia invades.

These and other reckless and ill-advised U.S. actions could provoke Russia to retaliate by invading the frontline NATO member states where U.S. troops are stationed, as Putin threatened to do several years ago, in order to roll back NATO by force. Far worse, they could provoke a Russian Electro-magnetic pulse (EMP), cyber, and potentially nuclear, surprise attack upon the U.S. homeland itself. A war between Russia and NATO could begin with a two-pronged Russian invasion of Poland and the Baltic republics thanks to Russia's heavily militarized Kaliningrad enclave which has hundreds of SS-26 nuclear short-range ballistic missiles that effectively shield itself from NATO attack. According to a recent RAND Corporation study, Russia could overrun Estonia, Latvia, and Lithuania in as little as three days.