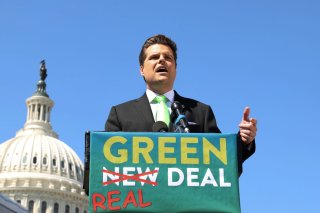 On the very first day he entered office, President Joe Biden, eager to accommodate environmentalists, moved U.S. policy on climate change, energy, and the oil and gas industry in a leftward direction. The result has been a collection of executive orders and congressional Democratic initiatives that together threaten U.S. national security, domestic economic growth, and the livelihood of working Americans. Russia’s invasion of Ukraine and rising gasoline prices inside the United States have highlighted the urgent necessity for a climate policy reset. The need for a credible alternative is clear. Yet American conservatives often seem flummoxed and uncertain when discussing important aspects of the matter. On the issue of climate change, specifically, an all-too-common response on the Right is to either avoid the subject, deny its reality—or demur to progressives and say, “I’m not a scientist.” Political progressives of course feel no such humility in laying out the most gargantuan policy demands in response, even when most of them are no more scientifically expert than, say, Nancy Pelosi.

The planet’s climate is warming, and human activities accumulating carbon dioxide from hydrocarbon combustion have something to do with it. Conservatives should get used to recognizing this, precisely to make their case. Left-wing policy proposals do not automatically follow from a simple recognition that climate change is real. Nor are the facts quite so simple as leftists claim.

As my colleague at the American Enterprise Institute Steve Koonin argues in his excellent book Unsettled, the scientific consensus regarding past human contributions to global warming—and our collective ability to predict the future—is considerably less certain than some environmentalists pretend. Modeling has its limits, and the complexities of the matter are immense. Koonin is no climate change “denier.” He received his Ph.D. in theoretical physics from MIT, is a professor at New York University, and served as undersecretary for science in the U.S. Department of Energy under President Barack Obama. Yet as he suggests in his eye-opening book, much of the media-driven hype around this subject is misleading, exaggerated, and false.

Liberal climate activists regularly misrepresent the degree of certainty over these matters and push forward a specifically left-wing policy response. Instinctively addicted to hyper-regulation, higher taxes, centralized economics, and a punitive approach toward the domestic production of oil and gas, progressives have located in climate change what they believe to be a killer argument in favor of overreaching federal government—something they want regardless of the weather on any given day. I have no doubt that many of them are entirely sincere in this conviction. In fact, their belief system borders on the fanatical. Others who are either timid, sympathetic, or well-intentioned, defer to this fanaticism. And that’s exactly the problem. Scientifically illiterate journalists, for example, with progressive political sympathies, are all too easily persuaded to double down on the most extreme claims in their reporting, enlisting themselves in a fight the full contours of which they do not understand.

The Forum for American Leadership (FAL) has recently released its “Blueprint for a Serious and Sound Climate Policy,” a brief document worth reading as a starting point for exactly what it claims to be. As the report’s authors say explicitly, climate change is real. But this is no argument for the current left-wing policy response.

As the FAL working group report suggests, one strange aspect among many of the current climate debate is that typically rigorous and objective scientific research is so often distorted in U.S. government summaries. The United Nations does the same thing. Clearly, a good many well-meaning citizens do not know what to make of the apocalyptic scenarios and demands regularly trotted out in these reports. Good scientists by nature welcome honest questions, counterargument, and critique. That’s how real science progresses in knowledge. Unfortunately, left-wing climate activists—including those installed at government and non-government agencies along with legacy media outlets—frequently do no such thing. Instead, they distort more balanced scientific summaries, dismissing possible criticisms and encouraging the most alarmist view possible to promote their agenda.

Again, the answer is not to dismiss all warnings of global warming as a hoax. Rather, the answer is to insist that U.S. government and UN summaries of climate science be just as balanced and unbiased as the science they rely upon. These summaries ought to give concerned citizens a reasonable and objective summary of known facts, rather than a wildly politicized one. Internal differences in the peer-reviewed process should be settled by outside experts instead of dismissing valid criticisms for political reasons. U.S. and UN reports should also be forced to undergo formal review by independent climate experts charged with probing existing assumptions, conclusions, and weak spots. Anyone who says they value “science” should have no objection to such a basic aspect of the scientific method.

Another odd aspect of the existing policy debate over global warming is progressives’ regular refusal to consider rudimentary cost-benefit analysis in relation to their immensely expensive proposals. Their usual starting point is to say that continued global warming will impose massive costs, and therefore massive expenditures, regulations, taxes, and compulsory government measures are required to stave off the apocalypse. Apart from the fact that green activists regularly overstate their ability to know the future—a central failing—the measures they propose must be subjected to the same scrutiny we would expect toward any colossal new government program. Mitigation, geoengineering, and adaptation are all available strategies. In some cases, adaptation may very well be the most cost-effective.

Biden has declared that his goal is to eliminate the use of natural gas and coal in the power sector by 2035. This goal is obviously unrealistic and straining to meet it involves costs that he will not admit. Every single policy proposal made by climate activists, the Biden administration, and related international organizations must be rigorously evaluated according to its overall costs and benefits compared to the alternatives. This should include more realistic considerations of economics, national security, and overall human wellbeing. For example, phasing out U.S. hydrocarbons without viable alternatives will tend to benefit authoritarian energy producers unfriendly to American interests—governments like those of Russia, Venezuela, and Iran. Sharp increases in oil and gas prices in the coming years could impact American national security for the worse. Have environmentalists considered this?

A good deal of private capital has already been invested in the concept of a successful transition toward green energy. Woke CEOs seem to feel pressured to demonstrate their green bona fides. So do liberal-leaning politicians, whether they are expert or not. But what about the costs, downsides, and stranded assets involved in a potentially failed transition away from hydrocarbons? Conservatives, of all people, must try to understand the possible negative unintended consequences of any radical and sweeping new policy proposal. U.S. government department and agencies—including Treasury, State, and Defense—should be required to explicitly consider and weigh the full costs and benefits of various climate policy alternatives in the same way. Less intrusive alternatives will not bring about the end of the world. On the contrary, they could include technological innovation, adaptation, mitigation, and market-based solutions considerably less authoritarian than the socialistic overhauls demanded by green activists.

Another problem climate activists have not considered is that the shift away from petroleum-fueled vehicles may unintentionally magnify the importance of China’s dominance over critical minerals. If vehicle electrification is the wave of the future, then dependence on OPEC oil reserves will be replaced by dependence on China, the country that dominates supply chains for electric vehicles. Congress should therefore provide increased funding to support U.S. mineral security. The United States should establish a strategic rare earths reserve and restrict the use of rare earth elements from China. Republicans like Senator Tom Cotton (R-AR) and Representative Mike Kelly (R-PA-16) have introduced legislation to that end. The federal government ought to make it easier for U.S. mining companies to open new production and refining facilities in this country, not less so. Defense contractors should not be permitted to buy rare earth-enabled products from China in the coming years. The Chinese must not be allowed to dominate international energy systems. This is a vital national interest.

All of this has a foreign policy component. Biden re-entered the United States into the 2015 Paris climate accord, on his own authority, immediately after his inauguration. It is an unrealistic agreement full of profound flaws. A more durable approach toward international climate policy, less subject to legal and political whipsaws, would include a role for Congress. For the United States to join a major agreement like the Paris accord should be subject to the two-thirds majority required by the U.S. constitution. A better alternative to the Paris accord would clarify that the chief purpose of these agreements is not to transfer wealth from developed countries to developing ones—and that China, the world’s leading polluter, will be held to the same standard as other wealthy nations. Congress ought therefore to take the lead in pushing for revisions to the Paris accord.

On a nitty-gritty level, millions of working families in states ranging from the Great Plains and the Rocky Mountains across the nation’s heartland to Pennsylvania depend on the oil and gas industry for their livelihood. Bicoastal metropolitan liberals and their activist allies are amazingly quiet on how these families are supposed to earn a living once that industry is shut down. More generally, environmentalist doomsayers are notably silent on how ordinary citizens within the United States and abroad are supposed to meet their daily energy needs at reasonable cost under fantasy green scenarios. It is an excellent example of how an increasingly left-wing party that purports to represent working Americans really does the opposite.