Restraint Will Be Impossible Without Critical Mineral Independence 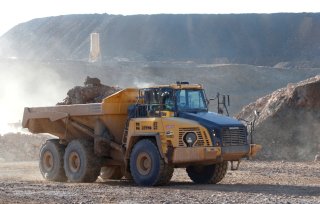 To maintain a strategic advantage in the twenty-first century, the United States is going to need minerals, and lots of them. Where these minerals come from will have a dramatic effect on what kind of foreign policy Washington can realistically pursue.

Emerging technologies in sectors of national security importance will demand increasing amounts of minerals and rare earth elements in the decades ahead.

In computing, guidance and control systems across a range of platforms require critical minerals. A single F-35 Lightning II aircraft is estimated to require about 920 pounds of rare earth materials.

In energy, the advancement of renewable power sources means an even greater demand for minerals. Last year, 22,355 megawatts (mW) of wind power were brought online in the United States. A single three mW wind turbine needs about two tons of rare earth elements, as well as tons of other minerals like copper and aluminum.

It is increasingly obvious that strategic minerals are not only a key to economic prosperity, but also crucial inputs for national security capabilities. In a rare instance of agreement, both President Trump and President Biden have issued executive orders recognizing this reality. However, the National Security Strategy of both administrations is silent on a crucial strategic question. What is America’s long-term strategy for maintaining a supply of minerals that are the foundation for national security technologies?

A careful study of the consequences of each reveals that the most prudent choice is increasing domestic supply, as it enables a strategy of restraint abroad.

China has already provided an example of a strategy that aggressively prioritizes access to foreign mineral supplies. China has a near monopoly on the Democratic Republic of the Congo’s cobalt mines, which produce 70 percent of the world’s cobalt. In Bolivia, a Chinese consortium is the leading partner supporting the government’s development of a massive lithium operation. Chinese diplomats now court the Taliban with an eye toward Afghanistan’s large mineral deposits.

The main benefit of Beijing’s outreach is that China has quickly increased mineral access in a few short years.

However, this strategy likely requires comfort with corruption. Hundreds of millions of dollars have gone missing under murky circumstances in Congo. Abetting a resource curse, especially in developing nations, could lead to instability that is counterproductive to other aims, like counterterrorism.

At its worst, a strategy of securing foreign critical mineral supplies is a slippery slope to intervention or outright annexation. There are many explanations for Russia’s recent invasion of Ukraine, but few of them acknowledge Ukraine’s bountiful mineral wealth. America has flirted with this imperialistic approach to key resources before. When guano, or bird feces, became a crucial input for fertilizer during the early nineteenth century, Congress authorized citizens to annex islands found to have large deposits. Such neocolonialism toward mineral-rich states today would be highly unlikely to win the United States friends and would require credible force to back up claims. Considering the significant financial and moral costs of an interventionist foreign policy, America would be wise to weigh other options.

Is it possible to meet America’s strategic need for minerals through domestic mining? Estimates provide a strong case for optimism. A proposed project in Nevada is predicted to be able to provide 25 percent of the world’s lithium demand, and identified cobalt reserves in Minnesota and other states total about one million tons. California boasts the richest rare earth mining operation in the Western Hemisphere.

The most attractive benefit of this approach would be America’s ability to maintain a foreign policy free of disproportionate deference to major mineral exporters. Washington’s long hesitance to displease Saudi Arabia is a reminder of how dependence on a foreign producer of a key natural input often comes with uncomfortable diplomatic concessions.

The world is now getting a small taste of how mineral dependence can force other considerations in foreign policy to take a back seat. For instance, Russian metals giant Norilsk Nickel is a key supplier of nickel and palladium, which are critical inputs for batteries and semiconductors. Norilsk has been called “too big to sanction” and has largely been exempted from the sanctions heaped on Moscow since its invasion of Ukraine.

With future research and development, recycling and new technologies could reduce the need for mining. However, no such panaceas capable of eliminating the need for new extraction currently exist.

The trade-offs for this route will largely depend on the safety and technology standards of each individual project.

A final choice would be to trust the global mineral markets to sort out supply problems, which would not require America to explicitly adjust its foreign or domestic strategies. The top fear of such an approach is vulnerability to coercion. In a 2010 spat with Japan over fishing rights, China instituted an embargo on rare earth elements exports to Japanese firms, leading Tokyo to quietly back down. The National Defense Industrial Association has worried about the fact that “China has restricted the export of rare earths, prompting concerns for their availability to the Defense Industrial Base.”

Critics of this fear argue that the 2010 episode actually showed the practical and economic difficulties of effectively leveraging control of mineral supply over the long term. Taking a market-dependent approach would allow the United States to avoid taking domestic environmental risks from mining projects or having to cozy up to any single supplier.

However, this approach gambles that a mineral supply interruption will be both temporary and not too painful. Nickel prices spiked to unprecedented highs after Russia’s invasion caused concerns about its sizable exports, causing the London Metal Exchange to have a meltdown. The possibility of other “black swan” events that could drastically impact prices, such as the nationalization of copper and lithium mining in Chile, haunts importers. A recent Department of Defense report points out that the “critical materials sector is distorted by political intervention and unfair trade practices … [that] result in significant challenges for the survival of domestic and allied manufacturers.”

The World Bank predicts that the world will soon need over three billion tons of minerals for scaling up emerging technologies in transportation, computing, and energy. The critical mineral supply chain is increasingly becoming the topic of Congressional hearings, Pentagon studies, and executive branch declarations.

In the face of the new “Great Game” of the twenty-first century, America must adopt a policy of restraint that avoids temptations for intervention or imperialistic behavior driven by a scramble for critical minerals. A strategy of restraint is made possible by domestic production. Even the possibility of dependence or coercion is rendered toothless by ample supply at home, allowing America to retain autonomy in its foreign policy as these critical minerals grow in importance. Taking the steps necessary to safely increase domestic production over the long term will add credibility to a proclaimed policy of American mineral independence. The average mining project takes about sixteen years to go from discovery to production, so there’s no time like the present to set these policies into motion. Increasing research and development funding for safe extraction technologies and practices is always a good idea, too. Most importantly, future strategic documents must articulate a coherent whole-of-government strategy toward the inputs that will soon drive international relations.

Through prudent investment in mineral supplies at home, the United States can achieve a prudent foreign policy of restraint and autonomy abroad. The seemingly unremarkable rocks right beneath our feet are actually the cornerstones of a wise and prosperous American foreign policy.

Andrew C. Jarocki is the Editor-in-Chief of the Realist Review. He is currently a Marcellus Policy Fellow with the John Quincy Adams Society.