Climate Change May Cost the United States $2 Trillion a Year 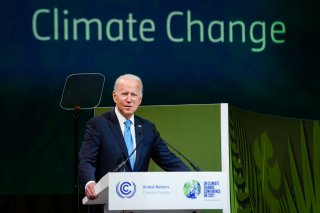 Droughts, floods, hurricanes, and wildfires caused by climate change could potentially cost the United States roughly $2 trillion annually, according to the White House.

The eye-opening analysis conducted by the Office of Management and Budget also sounded the alarm that the country could spend an additional $25 billion to $128 billion each year on coastal disaster relief, flood and crop insurance, wildland fire suppression, and health care insurance. A report published by the Office of Management and Budget earlier this week says that “the fiscal risk of climate change is immense.”

“Climate change threatens communities and sectors across the country, including through floods, drought, extreme heat, wildfires, and hurricanes that affect the U.S. economy and the lives of everyday Americans. Future damages could dwarf current damages if greenhouse gas emissions continue unabated.”

The analysis comes on the heels of a new United Nations Intergovernmental Panel on Climate Change (IPCC) report that said it is “now or never” to keep global heating under 1.5 degrees Celsius (2.7 Fahrenheit).

The report, per CNBC, added that curbing global heating to 1.5 degrees Celsius above pre-industrial levels would require greenhouse gas emissions to peak before 2025 at the latest, while methane would also need to be cut by about a third.

However, the scientists admitted that it is “almost inevitable” that the world will briefly surpass the temperature threshold of 1.5 degrees in this scenario. However, they argued that the world could, in fact, return below this critical level by the end of the century.

“Without immediate and deep emissions reductions across all sectors, it will be impossible,” he continued.

Per PBS NewsHour, IPCC Working Group III co-chair Priyadarshi Shukla, a professor at the Indian Institute of Management Ahmedabad who specializes in energy and environment modeling and policies, noted in a statement that “having the right policies, infrastructure, and technology in place to enable changes to our lifestyles and behavior can result in a 40-70 percent reduction in greenhouse gas emissions by 2050.”

Meanwhile, as reported by the Associated Press, U.N. Secretary-General Antonio Guterres said the IPCC report revealed “a litany of broken climate promises” by governments and corporations, accusing them of stoking climate change by continuing to use fossil fuels.

“It is a file of shame, cataloging the empty pledges that put us firmly on track toward an unlivable world,” he continued.