How to Counter China's Ambitions in the South China Sea 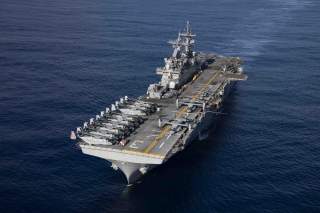 President Xi’s state visit to the Philippines was the first in thirteen years. It marks a high point in Sino-Philippine relations with economic pledges from Beijing and an agreement to engage in joint exploration in the Scarborough Shoals, maritime features that are claimed as sovereign territories by both Beijing and Manila.

The significance of the bonhomie between Presidents Xi and Duterte should not be downplayed. Prior to the decision of the Permanent Court of Arbitration’s decision to reject all of China’s claims in the South China Sea (SCS) in July 2016, bilateral relations were arguably at an all-time low. With the election of President Duterte and his declaration that the “U.S. has lost” in the SCS in Beijing during a state visit to China in July 2016, Duterte secured $24 billion in Chinese economic pledges to help the Philippines develop infrastructure and its economy. They also mutually agreed to put aside the territorial disputes between them to focus on cooperation and stabilizing their relationship.

By most accounts, the relationship has moved in a positive trajectory as some of the economic pledges made to Manila have begun to trickle in. To date, an estimated $800 million out of the $24 billion has been accounted for. As with most large-scale economic pledges related to infrastructure and development, it takes years for the economic assistance to take root and to be able to assess its effectiveness. Still, there are questions concerning Chinese commitment to fully delivering promised funds, especially if Manila strengthens its relationship with America and or Japan, or if Manila returns to a more contested approach to its territorial claims.

Notwithstanding the positive assessment of the detente between Manila and Beijing, there are consternations over infrastructure development and the reality that all projects are being conducted by Chinese companies. For many, this does not benefit the average Filipino because Chinese businesses are building Chinese roads (in the Philippines) with Chinese money.

Recalibrating this imbalance may ameliorate the reputation of Chinese “assistance.” If not, pledges may gravitate towards some of the criticisms being directed at Beijing’s Belt and Road Initiative (BRI) projects, with a growing chorus of participating states rethinking BRI participation. This uproar is over Chinese businesses, instead of local businesses and communities, being seen as the overwhelming benefactor of BRI projects and economic pledges. The withdrawal of Malaysia by Prime Minister Mohammed Mahathir from BRI projects is an illustrative example of what could become the trend if pledges do not manifest and if local stakeholders are not seen to be directly benefiting from projects and pledges. The Philippines will be no exception to this trend.

On the territorial front, critics of President Duterte’s policies see his detente with the Beijing as ill-considered with no substantial gain in the Philippines’ sovereignty claims. For critics, the lack of progress on the territorial issue and the nonchalant distancing of Manila from Washington are both naive and lack strategic long-term thinking.

Nevertheless, Duterte’s diplomacy has allowed it to extract financial and material resources from Japan, China and indirectly the United States at the same time. Japan and has provided coast guard vessels to help the Philippines manage and monitor their territories and has engaged in joint amphibious training. We have also seen an uptick in Japanese foreign direct investment into the Philippines and an expansion of Tokyo-Manila cooperation according to their strategic partnership.

America continues to work with the Philippine military to deal with extremists in the southern province of Mindanao as well as other forms of cooperation. Despite the rhetoric of severing relations with Washington, at the institutional level we still see strong coordination, collaboration and exchange in line with being an alliance partner.

In addition to infrastructure building, the construction of drug rehabilitation centers and damping down on provocative behavior in the Scarborough Shoals, China and the Philippines came to an agreement about joint exploration around the disputed territories.

While co-exploration between the Philippines and China represents an opportunity to potentially jointly exploit resources around their disputed territories, it represents what Dr. Fabrizio Bozzato, Research Fellow at the Taiwan Strategy Research Association, calls Science Diplomacy. Through joint exploration according to Dr. Bozzato, Beijing can actively engage in research that has both civilian and military usages.

Employing science diplomacy, joint exploration with the Philippines represents an opportunity to hit two strategic birds with one diplomatic stone. At the first level, Beijing can argue that it is engaging in good faith diplomacy by jointly exploring the marine domain for energy and natural resources that will benefit both states. This decreases bilateral tensions and is potentially a resource boon to both states.

At a more strategic level, joint exploration can be used to innovate in the area of high-tech development such as Beijing’s recently proposed AI underwater base in the marine domain.

Importantly, joint exploration with Manila and the choice of the SCS as the host for this AI underwater base is germane. It presents an opportunity to deploy the most sophisticated technology to consolidate control of the submarine domain. Concretely, under the guise of joint exploration and science diplomacy Beijing can deepen their sub-marine awareness in the SCS by measuring currents, temperature gradients and underwater topography. This kind of information is essential to operationalize a submarine fleet that can maneuver freely with complete domain awareness.

This will advance China’s strategic objectives of eventually securing hegemony over the SCS to protect its core interests of national cohesion and sovereignty but also help China to exploit the energy and natural resources in the SCS. The strategy is an effective one as the development of sub-marine dominance through joint exploration and eventual deployment of submarine assets cannot be monitored as easily as surface-level initiatives. For instance, the construction and eventual militarization of artificial islands in the SCS are definitely observable. Saliently, sub-marine bases are not as easily destroyed either.

The implications are clear for states in Association of Southeast Asian Nations (ASEAN) with territorial disputes in the region including Vietnam and the Philippines. By adding sub-marine dominance to surface dominance achieved through the construction of militarized artificial islands, China is attempting to gain comprehensive control of the SCS. Beijing’s goal is to consolidate and lock in strategic gains achieved since President Xi took the reins of power in China in 2012.

ASEAN countries should encourage extra-regional states like the United States, Japan, Australia and India to increase the frequency of their visits to the region in both the surface and submarine domains to demonstrate that no country has de-facto dominance through creating facts in and under the seas through artificial island and submarine base building. The QUAD (the United States, Japan, India, and Australia) may be a useful institution to prosecute this initiative despite the reluctance of India to take an overtly robust position on perceived surface and submarine behavior through grey zone tactics including science diplomacy.

The inclusion of extra-regional powers forming a concert of middle powers should be actively pursued as well. Candidates could include those self-professed Indo-Pacific states such as Australia, France, Japan and India but also other states with interoperability such as the United Kingdom, Canada and New Zealand. This QUAD 2.0 consortium could collectively balance the military asymmetry that exists in the region while demonstrating a commitment to a rules-based SCS and Indo-Pacific region.

Their involvement should not be limited to security-related cooperation. ASEAN states should encourage the same states to explore and conduct submarine development multilaterally. This would help to share the public goods in the SCS and inculcate multilateralism into the region’s most important center of commerce and transport that is rich with marine and energy resources.

China could be included in this process as both a way to promote inclusive multilateral exploration and exploitation in the SCS. This allows the region to collectively develop norms together that may be the foundation for joint exploration in the future. Multilateral cooperation could include the QUAD and QUAD 2.0 members alongside ASEAN countries and China. This could be a strong signal to Beijing that regional stakeholders and extra-regional partners are willing to work with Beijing if leaders in Zhongnanhai commit to multilateralism. Simultaneously, multilateral cooperation with ASEAN, QUAD and QUAD 2.0 states may ensure that the submarine domain in the SCS does not fall prey to science diplomacy tactics to achieve defacto submarine hegemony in the SCS.

Stephen R. Nagy is originally from Calgary, Canada. In December 2017, he was selected as a Distinguished Fellow at Canada’s Asia Pacific Foundation (APF) and an appointed China expert with Canada’s China Research Partnership. He also holds fellowship positions with the Canadian Global Affairs Institute (CGAI) and the Japan Institute for International Affairs (JIIA). Concurrently, Stephen is a Senior Associate Professor in the Department of Politics and International Studies at the International Christian University, Tokyo. He was selected for the 2018 CSIS AILA Leadership Fellowship in Washington.