How Georgia Could Gain from the Russo-Ukrainian War 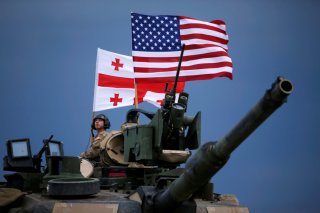 Vladimir Putin’s war in Ukraine underlines the continuing vitality of geopolitics in Eastern Europe. Ukraine is only the latest (and the most tragic) geopolitical contest between Russia and Western powers in the region, and it recalls the darkest days of the twentieth century in Europe. The war is a demonstration of Putin’s brutish and paranoid mind, but also of the asymmetrical realities faced by small states (not necessarily measured by physical size) on Russia’s borders.

Like other empires, Russia used (and uses) persuasion, manipulation, inducement, and punishment to annex, control, and legitimize its power in the region. Before the Russo-Ukrainian crisis exploded onto the international scene in 2014, South Caucasian states had also experienced Russia’s muscular authority, whether economically (embargoes on trade with Georgia and the capture of Armenia’s major industries), militarily (the Russo-Georgian war of 2008, arms to Azerbaijan and Armenia), or politically (disinformation, financial support of pro-Russian parties). None of this begins with Putin. Given the South Caucasus’ raw materials (copper, coal, and manganese as well as oil and gas) and strategic location (bordering not just Iran and Turkey but also the Black and Caspian Seas), which makes it a critical land bridge for transit, trade, and troops, the region has always been a magnet for Russia alongside competing Iranian, Ottoman, German, British, and American empires.

Yet things are not quite as dour for small states like Georgia as they were at the beginning of the twentieth century, when the first attempt to create independent Caucasian states was crushed by the Red Army. The current Russian government wants to dismember Ukraine, but mass demonstrations in the world’s democracies (along with extraordinary Ukrainian resistance and Western weapons) have demonstrated the importance of international norms, public solidarity abroad, and world media to small states. Such features underline the connections between domestic and foreign policy, as Western governments under pressure from their citizens have taken more determined action to isolate Russia.

A century ago, when imperial power was in full bloom and Germany, Great Britain, and the Ottomans all sought their share of the South Caucasus through secret agreements or force majeure, Georgia—which declared its independence in May 1918—had no patrons, no allies, no diplomatic support, and no protections from international law. Great powers blithely ignored Woodrow Wilson’s calls for self-determination, which had never included Georgia (or Azerbaijan) as potential states in the first place, and all three South Caucasian republics were reincorporated into (Soviet) Russia in 1920-1921 with little protest from Western Allies.

But today, even with the erosion of the liberal international order, Ukraine has shown that small states like Georgia, situated in the post-Soviet space, can mobilize larger democracies around international norms and treaties in their defense. Democracy, as well as geography, is central to such a strategy. If Ukraine was not an identifiable democracy, the Western world would likely have been less engaged in preserving its sovereignty. This makes the domestic struggle over democratic consolidation in Georgia an important national security matter.

Putin’s miscalculation in Ukraine in 2022 shows us that small (or medium) states have gained ground. They are no longer helpless entities without agency. They have a whole box of tools, and considerably more experience on how to use them when dealing with Russia. The liberal international order produces an environment far more favorable to small states, where human rights, collaborative security (unfortunately not in the South Caucasus), and democratic reform are supported—if not always fully practiced—by Western powers. If not for Western governments’ economic development aid in the 1990s and their promotion of multilateralism, diplomatic agreements, and a rules-based international system, Ukraine and Georgia would never have breached Russia’s sphere of “privileged interests.”

Non-coercive environments give small states bargaining powers they would otherwise not possess. Georgia has demonstrated on the international stage—at the UN and in negotiations with the EU and NATO—that it is able to create coalitions and resist Russia’s hegemonic claims. In particular, Georgia has the resources—more so than neighboring Azerbaijan and Armenia—of what Joseph Nye refers to as “soft power.” Georgia in the 2000s served as a rallying point for the West’s policies of democratic and economic reform in the former Soviet space. It demonstrated its usefulness for NATO in Iraq and Afghanistan, and it became a new cultural phenomenon through its opera stars, cuisine, and natural beauty, attracting millions of European tourists to partake in eco-tours in its mountains and food tours in its towns. Soft power, like hard power, will not guarantee Georgia’s security, but it is one of the country’s most useful weapons.

Realists reject any significance to states’ attractiveness or reputation as factors in their national security. Realists see, rather, the world of Putin, where power revolves around the dominance of great powers and the rules they set, where small states have no role to play. In the realists’ vision, the victims of Russian aggression are foolish to strive for sovereignty or independent statehood. Harvard’s Stephen Walt suggests that the answer for weak states like Georgia and Ukraine is to declare neutrality, but is this politically feasible, realistic, or something the next Russian government is likely to observe when it faces its next existential crisis?

Ukraine and Georgia do not share the geography of Switzerland or Austria; they border a neighbor whose identity is inextricably bound up with empire. It is unlikely that, whoever leads Russia in the decades to come, this state can or will concede its territorial gains in Ukraine or Georgia. John Mearsheimer, a champion of realism, argues that if Ukraine declares neutrality, the problem will simply go away. But Moldova has been “neutral” since 1994—it is in its constitution. Does this make Moldova any more secure from Russia than the Baltic states, who are members of NATO? Why such proposals come under the rubric of “realism” is baffling.

The realists are right in one respect, however. The West is part of the problem; it shares culpability for the war in Ukraine. But not because of liberal illusions or NATO’s “strategic aggression” against Russia. Rather, the tragedy in Ukraine is a consequence of the West’s weakness. Today, the lesson should be clear: Western states’ timid reaction to the Russian occupation of Transnistria in 1991-1992, the annihilation of Chechnya in two wars in the 1990s and 2000s, and the Russian invasion of Georgia in 2008 and Crimea in 2014 were precursors of the Ukrainian tragedy in 2022. The Russian pattern of occupation in Georgia in 2008 and in eastern Ukraine in 2014 were practically the same.

But paradoxically, the horrible events in Ukraine have the potential to fortify security for small states like Georgia on Russia’s borders. In Georgia’s case, this will require at least three things: a firmer commitment from EU and NATO states to Georgian security; democratic consolidation at home; and most important of all, a Russian defeat. Russia cannot be allowed to claim a win; if it does, insecurity for small states like Georgia (and small states elsewhere in the world), will persist. The opportunity to reshape a new liberal international order led by the world’s democracies will have been lost.