How Marines Can Fight the Stifling of Independent Thought 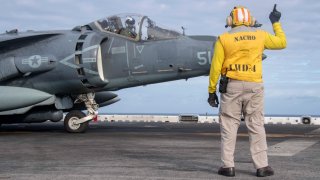 The nation is suffering from the loss of open, respectful, inclusive, and professional dialogue. At the very time when the complexity and interrelatedness of issues require independent thinking from multiple perspectives, there has instead been a rise in powerful figures working with considerable skill to build and impose one narrative (one thought construct from one perspective) on all members of a group—in the words of J.R.R. Tolkien, “one ring to rule them all.”

For years we have seen how both those in power and those seeking power have used a host of media outlets and techniques to impose narratives. Russian president Vladimir Putin’s claim that he is pursuing the“de-nazification of Ukraine” is a particularly egregious example of the power (and effects) of narrative, but many in the United States live in environments where one statement contrary to whatever the ruling narrative is on a particular issue can result in being labeled, thrust into a category, and forced to suffer the loss of a job, school seat, or position on a team.

Those entering the nation’s militaries and assuming positions of responsibility, like all citizens, are increasingly becoming products of these repressive intellectual environments. They have developed great sensitivity to what is acceptable thought, what can be expressed without concern, and what can be expressed only at the risk of losing a grade, a recommendation, or a much sought for position. They know that merely exploring, let alone advocating, unaccepted positions incurs significant risk. For them, it is a matter of great personal courage to red-team a superior’s plan or to challenge his orientation on any issue, tactical or otherwise.

And yet, the great complexity and interrelatedness of issues mandate multiple perspectives, multiple skill sets and experiences, and yes, much open, dynamic, and respectful collaboration to understand, frame, and solve problems. However, such an approach is anathema to those seniors with authoritarian inclinations, who, frustrated with sclerotic processes, so want results that they are more than willing to engage in stifling independent thought. And given the sensitivities already developed in juniors conditioned by dominating narratives, it is relatively easy for such seniors to suppress independent thought. In short, they win the narrative game and their decisions and actions proceed apace. The great tragedy, of course, is that those capability gaps and capability dependencies not fully vetted in transparent red teaming and minimally constrained experimentation can be exploited by aggressive enemies with no inclination to spare the egos of those who won’t allow themselves to be challenged.

Opening what is a rapidly closing, insular, and repressive culture will take time, thought, and commitment. It is too much to expect that improving our collective intellectual culture can be done quickly. But, we can begin by identifying some potential forums and guidelines with which to encourage independent thought and analysis. We can develop cognitive behaviors that help us work with complex systems. We can help each other learn.

In the not too distant past, various service-related publications and schools played constructive roles in helping to develop what came to be called maneuver warfare. They provided open forums for considerable spirited and mostly professional discussion. Publishers, editors, writers, readers, instructors, and students encouraged each other to learn and to grow; and in so doing, spurred much creative thought which culminated in capstone publications and operational concepts.

More importantly, the senior leaders of that era led by example. Distinguished veterans of the Vietnam War and survivors of the disastrous policies and strategies of Robert McNamara, his “whiz kids” and Gen. William Westmoreland, they resolved to rebuild the Marine Corps. Toward that end, they put themselves in the learning arena, they made themselves vulnerable, and they encouraged others to engage. They “cast their nets widely” from stock exchange traders to cognitive psychologists. They constantly questioned and re-oriented as they learned. And they not only accepted criticism, they encouraged it. Character and competence, not position and ego, were what mattered.

And so, we come to the critical issue: What first steps can be taken to encourage independent thinking in an era when those in authority choose orientations and facts to build narratives to dominate? What is to be done when the focus is on messaging and shifting narratives to manipulate and control rather than on leading and learning how changes and innovations might ripple through complex, interconnected national and international systems? In short, we recognize that, unlike the era in which we served, seniors are using a host of measures (non-disclosure agreements, suppression of critical articles, assignments, and so on) to limit and control independent thought and discussion.

In such a difficult environment, we question ourselves and others: Can schools and publications take constructive roles in developing independent thinkers capable of open, inclusive, respectful, and professional discussion? From a career standpoint, will authors and students perceive that it is just too dangerous to divest themselves of the notion that they must support service-level narratives? Will they, like tenured professors on civilian campuses, lose their positions for expressing thoughts counter to the dominant narrative? Is it possible for Marines to engage in spirited, aggressive red teaming of Headquarters Marine Corps ideas and narratives? Will Marines be encouraged to engage in pointed, detailed discussions, exercises, and experimentation that reveal capability gaps and capability dependencies before aggressive, opportunistic enemies exploit them? In short, will students and authors be afforded the opportunities to challenge this era’s version of McNamara and his whiz kids?

Toward the hopeful end that schools and service-related publications might dare to develop independent thinkers in this difficult environment, we propose some initial, first-cut guidelines that we hope others will further develop.

The quality of a Marine’s thinking ought to matter more than rank or position. Yes, we should be respectful of seniors. But we should be respectful of all who care enough about an issue to try to express their thinking or lessons learned on a particular matter. While some authors may lack well-developed writing skills, editors and readers should be more interested in content. For example, the combat lessons a young developing leader is trying to share about his/her first combat experiences ought to be valued more heavily than whether or not his/her writing skills are sufficiently nuanced to avoid bruising the ego of a senior whose directives added to the confusion of that first engagement.

Marine Corps culture and its senior leaders and editors ought to act more in accordance with Gen. John Lejeune’s guidance about teacher-scholar by providing a reasonably graded on-ramp to encourage young leaders to write and express their thoughts and experiences. It is by writing and thinking that young leaders will develop their writing and thinking. Publications and classrooms should not be forums for crushing developing leaders or ideas. They should be forums for encouraging the development and maturation of people and ideas.

Authors and readers ought to avoid the prevailing culture’s point/counterpoint framing and discussion of issues. While such simplistic bifurcations of issues are popular with lawyers, politicians, and commentators on various media platforms, serious students of complex systems recognize multiple unique perspectives are essential to even beginning to understand the functioning and adaptations of complex systems. Moreover, we all ought to resist labeling and categorizing authors. Each person is unique, has a unique set of experiences and skill sets, and tends to orient and focus based on those traits.

Ultimately, what matters is whether or not articles or papers contribute to accomplishing missions and making Marines.

Keith Holcomb is a retired USMC brigadier general whose commands included the 8th Marines and 2nd Light Armored Infantry Battalion. His last assignment was as the Director of Training and Education Division.