How the West Still Misunderstands Gorbachev 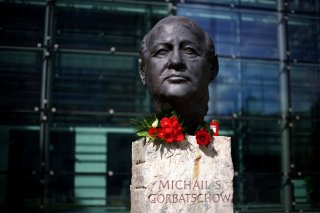 Mikhail Sergeyevich Gorbachev, who died on August 30 at the age of ninety-one, was a generous, kind-hearted man, as the BBC would like us to remember. The last Soviet leader, who presided over a sclerotic union, whose single most decisive achievement was passivity during a crisis, for which he won a Nobel Peace Prize. An unfailingly decent, enormously idealistic, and arguably foolish man who lost himself an empire but also saved the world from a bloody civil war and potentially unthinkable nuclear proliferation. Gorbachev was one of the first leaders post-Soviet collapse to question NATO expansion beyond Central Europe, knowing that that would be the death knell to his vision of an Atlanticist Russia with neutral zones in the former post-Soviet space.

Amidst a lot of opining about Gorbachev’s idealism, what is now forgotten is the realist compromises that were needed from the West between 1984-1995 to see through a peaceful dissolution. Most people don’t remember just how dangerous the Soviet dissolution could have been; the elder statesmen in Germany, France, Britain and the United States understood that far better than the current crop who grew up under “liberal hegemony.” It was not a typical model of a great power that peacefully gave up an empire. It’s an outlier and it needed extreme compromise from all sides. And that is precisely why history still might remember Gorbachev as one if its “great men,” who turned out to be a pivotal figure, for reasons expected and not.

If one believes in the subjective interpretation of history as is the current fad, that history is always about narrative over material facts and power distribution, the question of judging a “great man” then becomes complex. Gorbachev is remembered kindly in the West precisely because the West remembers him as a passive idealist. A man on the losing side of the greatest geopolitical and ideological rivalry who stepped aside with hurt but quiet dignity. Everyone likes a graceful loser. The narrative gets complicated when things are looked at from the other side.

One cannot begin to comprehend the amount of indignity the Russians faced in the decade after the collapse of their system, and that is not just a loss of status after the fall of an empire, it is a loss of an entire way of life. Death, abortion, divorces, prostitution, and suicides skyrocketed as the entire savings of generations were wiped out due to economic turmoil. Just as the Scottish nationalist narrative now is that they were also victims of England, even when Scotland formed the bureaucratic and trade backbone of the British empire, the former Soviet states now routinely denounce Russia, and there is a wholesale cultural amnesia about both the communists as well as a significant number of people in those very same states willingly taking part in the failed Soviet experiment. Modern history is all about simplistic narratives, the losing side rarely gets to narrate their version.

Lithuanians don’t see Gorbachev kindly, and rightly so. Soviet troops singled out and massacred Lithuanian protesters after all; just as to Bengalis in India, Winston Churchill will always remain evil due to his inability to stop a famine, due to his prioritizing food in specific theatres during a world-defining war. Here again, narrow standpoint epistemology wins over detached history. Outside the Soviet space, the Eastern Europeans question whether Gorbachev was idealistic, or was simply incapable to stop the march of history and stem the economic rot that led to the collapse of the USSR. President Joe Biden claimed that Gorbachev was a visionary. One might say he was anything but. Gorbachev did not have the vision or foresight to understand where perestroika would lead to. In that sense, he was a communist to the end, his Trotskyist idealism was in contradiction to the Stalinist discipline needed to maintain an imperial rule. Nationalists, especially in central Europe wanted freedom; Gorbachev couldn’t stop the forces he unleashed.

The empire Gorbachev presided over was ruled by an unimaginative gerontocracy and an entrenched bureaucracy of midwits, living out the failed economic and strategic ideas of their youth. Its society was militantly atheist, and one where a specific governing ideology had a stifling hegemony over every stratum of life, including academia and media. Its government paranoid about foreign influence with an elite edifice desperately trying to promote ideas that defied both logic and sensory evidence of eyes and ears; overstretched militarily beyond means in places of peripheral strategic interest. A society where abortion, addiction, and suicide rates were off the charts; where all crimes were forgiven, only if one could manage to be on the right side of the governing ideology.

Gorbachev’s biggest legacy in Russia was a core group of future politicians who internalized the reasons for the USSR’s collapse, whether they liked it or not. His glorification in the West means that we still fail to outline a detached history of why the USSR imploded and fail to learn from it.