H.R. 1 Is a Threat to American Democracy. Period. 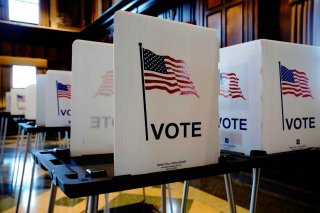 There are many vulnerabilities in the American election system. These vulnerabilities need to be fixed. Unfortunately, H.R. 1—the “For the People Act of 2021,” which recently passed in the House without a single Republican vote, and is now before the Senate—is not the way to do it. Indeed, H.R. 1 would make things much worse, usurping the role of the states, wiping out basic safety protocols, and mandating a set of rules that would severely damage the integrity of the election process.

H.R. 1 would mandate same-day and automatic voter registration, and encourage vote trafficking of absentee ballots. It would eviscerate state voter ID laws and limit the ability of states to verify the accuracy of their voter registration lists. This would institutionalize the worst changes in election rules that occurred during the 2020 election. But H.R. 1 would go even further in increasing the security weaknesses inherent in the current “honor” voter registration and voting system that exists in states across the country.

Anyone who doubts that fraud occurs is living in a dreamland. When the U.S. Supreme Court upheld Indiana’s new voter ID law in 2008, it noted that America has a long history of election fraud documented by journalists and historians—and that fraudulent voting could make the difference in a close election. After all, we frequently have close elections.

The Heritage Foundation’s Election Fraud Database, which is just a sampling of proven cases of election fraud from across the country, now contains more than 1,300 cases, and we are continually adding to it. The database does not include numerous cases—such as those reported recently in New Hampshire, Texas, and California—where those charged with fraud have not yet been convicted.

If H.R. 1 is not stopped, then Americans may never be able to trust the fairness and credibility of future election outcomes. To assure the integrity of future elections, a far better approach is to prod states, which have primary constitutional responsibility for the administration of elections, to fix the holes in their election laws and rules to ensure both eligible voter access and ballot security. Those are the two essential principles of the election process and, unlike what the Left believes, you cannot have one without the other.

So what should state legislatures be doing right now while they are in sessions all across the country? Here are just a few “best practices” taken from a much more extensive and complete list published by the Heritage Foundation.

It seems pretty obvious that voters should be required to authenticate both their citizenship and their identity before casting ballots. Only lawful citizens can vote in federal elections. States should, therefore, require proof of citizenship to register to vote, as well as verify the citizenship of registered voters with the records of the Department of Homeland Security, including the E-Verify system.

States should require voters to present a government-issued photo ID to vote in-person or by absentee ballot—something already implemented by a handful of states such as Alabama, Kansas, and Wisconsin. Claims that this requirement constitutes voter suppression are simply frivolous; virtually every person of voting age already has such IDs, and those who do not can easily get them. Every state with an ID requirement issues a free ID to anyone who doesn’t already have one. Despite the empty howls of “repression,” states that have implemented ID requirements have seen turnout go up, not down.

Absentee ballots are ripe vehicles for fraud because they are the only ballots that are voted outside the supervision of election officials and outside the observation of poll watchers. This leaves the ballots susceptible to being stolen, forged, and altered. Those voting absentee may also be subject to coercion and pressure in their homes—something that can’t happen in a polling place. Absentee ballots should be reserved for individuals who are too disabled to vote in person or who will be out of town on Election Day and all early-voting days.

Similarly, states should ban vote-trafficking by third parties; H.R. 1 would require states to allow vote trafficking. It defies common sense to think it is a good idea to allow candidates, campaign staffers, party activists, and political operatives to obtain possession of, and deliver, absentee ballots in elections in which they have a stake in the outcome.

Just take a look at what happened in the North Carolina’s 9th Congressional District election in 2018—an election “corrupted by fraud, improprieties, and irregularities so pervasive,” the state Board of Elections overturned the results of the congressional race (and two local contests) and ordered new elections.” The problems arose because third parties were allowed to handle absentee ballots.

Voter registration lists are in notoriously bad shape all across the country, filled with registered voters who are noncitizens, have died or moved away, are ineligible because of a felony conviction, or are illegally registered at commercial instead of residential addresses. “Critical Condition,” a 2020 report from the Public Interest Legal Foundation, found over 144,000 instances of potential fraud in the 2016 and 2018 elections. It included individuals who illegally cast two votes in the same election because they were registered more than once in the same state or registered in two different states, as well as individuals credited by state election officials with voting after they were deceased.

To prevent this from happening states much design their computerized statewide voter registration lists to be interoperable, so that they can communicate seamlessly with each other, frequently exchanging and comparing information in their databases. For example, when an individual changes the residence address on his or her driver’s license, that information should be sent to state election officials so that the voter registration address of the individual is also changed to his or her new Department of Motor Vehicles residence address. States need to compare their lists with other states to find individuals who are dual registered. They should also access federal databases, such as the death index maintained by the Social Security Administration.

We should never see again what we saw last year—legally-designated election observers being shut out of the process in places like Detroit and Philadelphia. Observers must be allowed to have full access to every step of the election process, because transparency is essential to a fair and secure system, as well as maintaining public confidence. States need to strengthen their laws to punish election officials who prevent observers from fulfilling their vital function.

Finally, state legislatures must ensure that they have legal standing to prevent unauthorized state officials, such as governors or secretaries of state, from changing or ignoring state election laws—another thing we saw far too often in 2020. And private funding of election officials by organizations and individuals like Mark Zuckerberg must be banned. Such funding creates a conflict of interest and creates unequal opportunities to vote, potentially influencing the outcome of elections.

Americans want to ensure that all eligible citizens have access to the voting process. But there must guarantees that those votes are not diluted or stolen by election fraud and other problems. It is past time for the states to fix these problems—and it will never be time for Congress to interfere and make these problems even worse than they already are.