If Turkey Wants the F-16, Ankara Must Act Against Iran 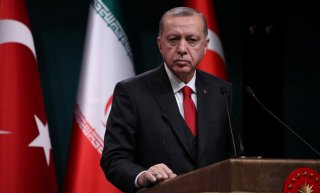 President Joe Biden is uniquely positioned today to end Turkey’s bid to undermine European security and halt its dangerous drift toward Russia and Iran. Crucially, Turkey is desperate for U.S.-made F-16 warplanes and modernization kits. Meanwhile, President Recep Tayyip Erdogan’s domestic political support is cratering. Should he survey the landscape, Biden will see that he has an opportunity to accomplish goals that eluded his predecessors. He can stop Turkey’s spiral out of the Western orbit while strengthening U.S. national security with a blow against Iran.

For the United States to approve sales of military equipment to Erdogan, Turkey should scale back its trade with the Islamic Republic of Iran, cut off Iran’s pathways to Turkey’s banks, and designate Hezbollah in its entirety as a terrorist organization.

On trade, Turkey is Iran’s bridge to European goods. This must stop. The 330-mile border between Turkey and Iran is an obvious weak spot in policing both U.S. and European sanctions. Since 2016, United Against Nuclear Iran (UANI) has identified and contacted more than seventy Turkish firms suspected of engaging indirectly with the Iranian regime. Research suggests that Turkish logistics companies may even be shipping goods such as advanced industrial “computer numerical control” (CNC) machines, ordinarily prohibited under “dual-use” lists. Turkey should significantly restrict Iran’s commercial access by shutting its land border with Iran, which it has done many times in the recent past.

Second, Turkey must ban Bank Audi and its Turkish subsidiary, Odeabank, from operating inside its borders. According to a federal lawsuit, Bank Audi is one of thirteen Lebanese banks that have long supported the development of Hezbollah-designed and Iranian-manufactured bombs and munitions. Such devices have killed or wounded more than 1,000 Americans serving in Iraq. As a supplementary move, Ankara should stop all Turkish banks from maintaining correspondent relations with banks that have been accused of laundering money and facilitating Iran’s state-sponsorship of terrorism.

Equally, Biden should be prepared to impose a ban, too, on U.S. banks having correspondent relations with suspect institutions. This would demonstrate principled leadership and a commitment to supporting Lebanese sovereignty. For Turkey, it would help to improve business confidence and demonstrate that doing business in Turkey is a low-risk proposition. Because right now, it’s not.

The issue of Turkey’s state-owned Halkbank, of course, also sits at the confluence of any discussion on Turkey-Iran trade and banking. On October 22, the Second U.S. Circuit Court of Appeals ruled that Halkbank can be sued for its role in the “gas-for-gold” scheme which benefitted Iran and laundered one billion dollars through U.S. banks on its behalf and transferred tens of billions of dollars in restricted funds to Tehran. Turkey must help with U.S. efforts to address these defects as so obviously encapsulated by Halkbank.

All this would further help Turkey’s diminishing global financial reputation, which suffered a further blow on October 21, when the Financial Action Task Force (FATF) added Turkey to a list of countries with “strategic deficiencies” in its Anti-Money Laundering and Counter-Terrorism Financing banking regulations.

Lastly, Turkey should also join the twelve European states and nine members of the G20 that have designated Hezbollah wholly or in part as a terrorist organization. Each has recognized Hezbollah’s caustic effect on Lebanon and the value Hezbollah offers to Iran by providing it with a forward operating base on the Mediterranean. Biden should demand similar action from Ankara. And he should lead with a demand that such a designation be made in whole.

Biden may find a receptive ear for such a wish list. After all, relations between Iran and Turkey have deteriorated markedly over the past year. Turkish intelligence and law enforcement disrupted an Iranian plan to kidnap a former Iranian military official living in Turkey and render him to Tehran. This was preceded by a near rupture in relations over Iran’s support for Turkey’s arch-foe Armenia in the Nagorno-Karabakh war in 2020. Turkey should be willing to scale back its relations with the Iranian regime, but if it is not, the United States now has leverage to force Erdogan into making a course correction.

“The most important item will be our F-35 issue,” Erdogan said recently, a reference to Turkey’s effort to recoup its lost investment after its eligibility in the F-35 stealth fighter program was suspended due to Ankara taking delivery of Russian military hardware. Biden should find out just how important it is, and how far Erdogan is willing to go to repair the U.S.-Turkey relationship.