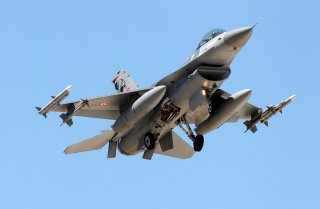 Turkey is turning to the United States in hopes of buying a batch of new F-16V fighter jets. Since its purchase of Russia’s S-400 air defense system, Turkey has been removed from the F-35 Joint Strike Fighter program and forced to watch its geopolitical competitors improve their air warfare capabilities. Turkey believes F-16V procurement is vital to keeping its airpower sharp into the 2020s and beyond.

The Turkish Air Force has technological shortcomings that could lead to major setbacks if not addressed adequately.

The MMU’s problems are not limited to the engine. Early production models will be 4++ generation platforms rather than fifth-generation fighters. These planes won’t arrive in meaningful numbers until the mid-2030s or later, by which time sixth-generation aircraft will enter service with the world’s top air forces.

Today, Turkish airpower relies on fourth-generation F-16 Fighting Falcons with no anticipated 4.5-generation updates, except for the possible F-16V purchase. While Turkey faces grave challenges, its geopolitical rivals are making great progress. Greece has finalized a deal for the Rafale aircraft with France, along with advanced naval warfare solutions. Athens is also working with Lockheed Martin to modernize more than eighty F-16s to the F-16V variant. Greece will also acquire F-35 stealth fighters. The Turkish Air Force may well find itself flying combat air patrols with outdated fourth-generation F-16s in the 2030s against a modernized Greek air force.

Elsewhere, Ankara’s shortsighted foreign policy decision to align with the Muslim Brotherhood and Hamas in the Middle East has antagonized powerful actors. The United Arab Emirates, Israel, and Egypt have all sided with Greece through defense partnerships. Turkey is in trouble.

The Turkish Navy Cannot Save the Day Either

The Turkish Navy does not suffer from these technological shortcomings. Turkey maintains a clear edge over Greece in the naval balance of power in the Aegean and Mediterranean. Four indigenous corvettes have entered service in recent years, soon to be followed by four advanced I-class frigates with anti-air capabilities.

The Turkish Navy is also set to receive its crown jewel, the TCG Anadolu Amphibious Assault Vessel, soon. Because the plan to embark the F-35B fell through, Turkey’s principal power projection asset will have a largely robotic air wing. Powerhouse drone manufacturer Baykar is working on the Bayraktar TB-3, an unmanned combat aerial vehicle with folded wings and a larger combat payload capacity than the Bayraktar TB-2. The MIUS, a more ambitious platform with a jet engine and low radar cross-section aerodynamic design features, will start its initial flight tests in 2023.

In return, Paris will be aiding the Greek Navy’s capacity with new frigates in coming years. The platforms will be equipped with force multipliers such as the Aster-30 Block-1 air and missile defense system, Exocet MM40 Block 3C anti-ship missiles, and Thales’ state-of-the-art SeaFire radar. Still, while the talismanic “French touch” would provide a boost for Athens, a few modern frigates cannot alter the naval correlation of forces, especially considering Turkey’s well-established shipbuilding sector and indigenous munitions production capacity.

Nevertheless, the absence of adequate Turkish airpower would undermine any naval operation. Should Turkey’s competitors claim the skies at the onset of an air-sea battle, the Turkish Navy’s platforms would be dangerously exposed to the adversaries’ standoff missile salvos without entering the engagement envelopes of the surface combatants’ air defenses. The air force’s technological curse is contagious, and the Turkish Navy cannot escape from that.

Despite the Countering America’s Adversaries Through Sanctions Act (CAATSA) sanctions, Ankara can still legally secure the F-16V deal. Turkey has two major procurement routes. The Ministry of Defense Procurement Office which oversees foreign military sales provides the first path. The Presidency of Defense Industries (SSB) controls military-industrial subsidiaries and chiefly manages projects in which Turkey’s defense technology and industrial base are involved. The SSB has been under the CAATSA sanctions due to the S-400 acquisition. However, the Ministry of Defense route is open for procuring the F-16V package.

Still, the U.S. Congress has the legal authority to block the sale. If Turkey faces a Congressional refusal, then the Turkish Air Force will have to weather the storm in the 2020s and beyond. It will have to fly an aging fighter fleet against fast-modernizing competitors.

Even worse, the Kremlin will probably see a historic window to capitalize on Turkey’s displeasure if Congress blocks the sale. Left out in the cold by its chief NATO ally, Turkey will likely opt for procuring the second batch of S-400s immediately. A second purchase would likely include technology transfer and industrial production in Turkey rather than an off-the-shelf acquisition plan. Turkey may even choose to purchase aircraft from Russia. Turkey’s procurement chief, Ismail Demir, has publicly said that the Su-35 and even the Su-57 fighter options have never been removed from the agenda.

Russia has also been monitoring Turkey’s indigenous aircraft program for some time to offer the RD-33MK engine that powers the MiG-35 and MiG-29 M/M2 fighter jets. This would likely lead to large Turkish defense manufacturers, such as TUSAŞ, Aselsan, and Roketsan, being targeted by CAATSA sanctions if they were involved in significant transactions with the Russians.

In the worst-case scenario, further sanctions could damage the only remaining acquisition route between the United States and the Procurement Office of Turkey’s Ministry of Defense. If this occurs, Turkey’s defense ecosystem will be cut off from its major transatlantic anchors.

The Turkish administration’s F-16V modernization request goes well beyond the realm of a simple arms deal. Ironically, it was the F-16 Fighting Falcon which once anchored a “special” military alliance between Turkey and the United States. Decades later, advanced F-16 sales may seal the fate of the Turkish-American strategic ties, as well as Turkey’s geopolitical orientation.

Dr. Can Kasapoglu is director of the Security & Defense Research Program at EDAM and a fellow on ‘Eurasian Military Affairs’ at the Jamestown Foundation. Dr. Kasapoglu holds a Ph.D. from the Turkish War College and an M.Sci. degree from the Turkish Military Academy. Previously he was an Eisenhower Fellow at the NATO Defense College in Rome and held a visiting research post at the NATO Cyber Center of Excellence in Tallinn. His works can be followed @EdamDefense.