Resolving the S-400 Crisis Could Revive the Turkish-American Alliance 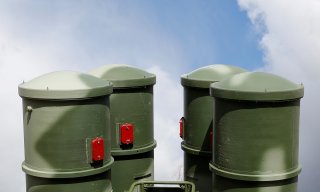 U.S.-Turkish relations are hovering at a nadir not seen since the 1974 U.S. Arms Embargo, imposed following Ankara’s invasion of Cyprus. Even then, no one seriously questioned Turkey’s commitment to the western Alliance system.

Today an array of disagreements mar the relationship between these two NATO allies. These disagreements range from Turkey’s occupation of northern Syria and America’s partnership with Syria’s Kurds to Ankara’s authoritarian policies that have totally eviscerated human-rights protections and Turkish force projections in the Eastern Mediterranean. Most recently, President Joe Biden’s formal recognition of the 1915 Armenian Genocide infuriated many of the Turks.

Nothing, however, comes close to the rift created by Ankara’s decision to purchase the $2.5 billion S-400 anti-aircraft missiles from Russia despite Washington and NATO’s persistent and loud warnings. The dispute overshadows just about everything else. Much to the consternation of Turkey’s mercurial president, Recep Tayyip Erdogan, who has invested his own prestige in this purchase, Washington has uncharacteristically taken a hardline and demanded that Turkey divests itself of these missiles, or else.

Their acquisition has already led the United States to kick the Turks out of the F-35 stealth fighter program. Thus, Turkey will be prevented from purchasing the top-of-the-line fighter that the NATO alliance has decided should replace the ailing inventory of fourth-generation aircraft. Ankara has also lost its role in the production and servicing of the F-35 aircraft, an arrangement that would have allowed it to earn billions of dollars in export revenue and benefit from significant technology transfers.

Washington repeatedly warned Erdogan not to proceed with the S-400 acquisition and charted out the precise penalties that would be imposed. Erdogan chose to ignore these warnings and went ahead with the purchase of two such systems from Russia. For Russia’s leader, Vladimir Putin, this represented a golden opportunity to sow further discord between Ankara and its allies.

Why Erdogan would risk such rupture with Washington remains a mystery. There are two possible explanations. The first suggests that he was confident that the Americans would eventually relent, as they have on most occasions when there has been a disagreement between the two sides. In Washington’s traditional assessment, Turkey with the second-largest NATO army and a valuable geostrategic emplacement ought not to be alienated. The other explanation has to do with Erdogan’s pique at the United States, especially after the failed July 2016 coup attempt that he blames on Washington. The deal with Moscow, therefore, was an attempt to demonstrate his displeasure at the Americans even though the order was placed in September 2017 during the Trump administration.

Turkey took delivery of the first of the two S400 batteries in July 2019 but, given Washington’s opprobrium, has refrained from operationalizing them or deploying their radars. This, of course, does not satisfy Washington.

There is no easy solution to this discord, and it risks, along with other disagreements, to further erode relations. What is needed, therefore, is some genuine imaginative and unconventional thinking. Sen. John Thune (R-S.D.) proposed that the United States buy the S-400 missiles from Turkey. The Russians immediately let it be known that Ankara would need their permission to sell the missiles to a third country. In 1998, Cyprus purchased Russian S-300 missiles, which was Russia’s most advanced anti-aircraft missile system at the time. Turkey, feeling imperiled by the system’s radar which could observe movements deep in Turkish territory, threatened to launch bombs. Faced with such threats from Ankara, Washington sought to defuse the crisis by structuring a compromise that resulted in relocating these missiles to Crete in NATO-member Greece. Much to Moscow’s discomfort, many NATO countries and other allies, such as Israel, trained their pilots against its prized system. Hence, it is unlikely that Moscow will allow a repeat of this incident. This rules out one other such proposal to move the S-400 missile system to Azerbaijan.

There are some people who believe the United States and Turkey should come to an agreement that allows the missile system to remain boxed and subject to periodic inspections. Other people have contemplated storing them at the Incirlik base in Turkey where Washington stations its 39th Air Base Wing, thus facilitating inspections.

Washington is unlikely to endorse such proposals because it has lost faith in Erdogan. Even if the latter were to consent to such a deal nothing stops him from reneging sometime later. The American presence on Incirlik base has become a contentious issue in Turkish politics; America’s eviction from there becomes one of the most popular refrains used by politicians and others during episodes of rising anti-Americanism as was the case a few weeks ago following Biden’s recognition of the 1915 Armenian Genocide by the Ottomans.

From Erdogan’s perspective, to have squandered $2.5 billion on missiles that end up in storage damages the image of the strong-willed leader who brooks no criticism or challenge from anyone, much less from a foreign leader. He knows he cannot indefinitely postpone a decision lest this makes him vulnerable at a time when he is under pressure at home for economic mismanagement and increasing authoritarianism.

In the meantime, the continuing perception of a deepening crisis between the two allies has harmed Turkey’s economic prospects. In fact, Washington has imposed sanctions on some Turkish officials through the Countering America’s Adversaries Through Sanctions Act. These were initially introduced in the waning days of the Trump presidency. Trump had resisted enacting them because of his cordial relationship with Erdogan, but he relented under pressure from Congress and from within the bureaucracy. Still, he succeeded in limiting its impact. Given the current anger at Turkey among U.S. lawmakers, there is no guarantee that these will not be revised and strengthened in order to punish Erdogan.

As solutions are sought, one thing is clear: the chances are slim that the United States and NATO will risk reintegrating Turkey into the production of the F-35 jets even if the deal is nil. This is despite the fact that Turkey’s exclusion has caused delays and cost increases in the production of engines for F-35 jets. Bringing back Turkey will be viewed as too risky. Even Ankara’s return to purchasing F-35 jets in the event of an arrangement will have to be approached with great caution. Turkish officials have not given up though. As recently as this week, they have signaled that they intend to pressure Washington to resume deliveries of the aircraft.

As long as the S-400 missiles are on Turkish soil, there is no way that Turkey will be allowed to purchase F-35 jets. There remains one possible solution that could perhaps, at least on an experimental basis, help diffuse the situation. Turkey has two military bases in Qatar. What if the missiles were moved there? Turks can argue to the Russians that this is Turkish territory hence the control and operations of the S-400s would remain under Turkish command. Qatar had expressed an interest in buying S-400s but shelved the idea for the time being in view of American opposition this may be a satisfying outcome.

Qatar is also first and foremost a U.S. ally. The Al-Udeid military base is America’s largest in the region. It has housed F-22 jets, B-52 bombers and F-16 jets but no F-35 jets so far. But one of Qatar’s regional rivals, the United Arab Emirates (UAE), is in the market for F-35 jets. That sale has yet to clear a skeptical Congress and a Biden administration that has had second thoughts over Trump’s approval of UAE’s interest in purchasing them. Even if the UAE were to receive F-35 jets that would be a long way off.

There are other impediments to such a deployment as the UAE and Saudi Arabia may be opposed to having powerful missiles in their neighborhood. The S-400 radar with its six-hundred-kilometer range can track numerous targets simultaneously. The two states have been critical of both Turkey and Qatar’s close support for their nemesis the Muslim Brotherhood. To punish Qatar, they maintained a boycott on Qatari flights and businesses.

Still, Washington can fashion an arrangement, just as it did with the Cypriot S-300 missiles, that will give it some indirect control and access. It can also make sure that the system never leaves Qatari soil and, to the extent such a deal brings about an improvement in Turkish-American relations, the S-400 system could be transformed into a headache for Tehran.

This represents a way out for Erdogan; he would be able to claim that he did not give in to U.S. demands not to deploy them and he also is helping his Qatari allies defend themselves with a missile system they too wanted to purchase but could not.

This proposal may be too fanciful or possibly even unrealistic. Nonetheless, it is put forward here as an example of unconventional thinking needed to solve an impossible crisis plaguing the Turkish-American alliance.