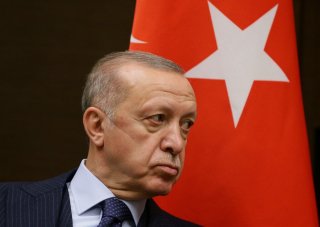 President Recep Tayyip Erdoğan has a plan. Eighteen years into his rule, he has transformed Turkey at home and on the world stage. Erdoğan’s ambition is greater than simply reviving Turkey’s Ottoman heritage and making Turkey a regional player. Rather, he seeks to reshape the post-World War II liberal order.

Erdoğan makes no secrets of this. His slogan “The World is Bigger than Five” is a rejection of the power that the permanent UN Security Council members hold. Sami Kohen, who for six decades has observed Turkey in a Milliyet column, wrote that Erdoğan’s “priority [is] in the creation of a new world order.”

To do this, Erdoğan turns precedent on its head, dismisses diplomacy, shoots first, and counts on Western inaction to get away with it. He has questioned, for example, the legitimacy of the 1923 Lausanne Treaty setting Turkey’s borders; his cronies publish maps incorporating neighbors’ territory into a greater Turkey. These are crystal balls: While Erdoğan justified Turkey’s Syria intervention as counterterrorism, his forces subsequently ethnically cleansed Kurdish districts, opened Turkish post offices, and even issued Turkish ID cards to those under its occupation.

The same holds true for Iraq. Erdoğan has not only resurrected nearly century-old claims to Mosul and oil-rich Kirkuk, but also deployed 1,150 troops into Iraqi territory. Incursions are frequent; withdrawals rare.

Turkey’s belligerence puts the Aegean and Mediterranean on edge. Turkish forces threaten Greek islands and challenge exclusive economic zones in the Mediterranean. As Turkey’s occupation of northern Cyprus nears a half-century, Erdoğan shreds the status quo: He has moved into Varosha in defiance of UN resolutions and he transformed occupied Lefkoniko airport into a drone base that puts the eastern Mediterranean and much of North Africa in his crosshairs. Islamist settlers overrun Turkish Cypriot communities.

Drones and jihad now push his agenda. Turkish drones and proxy militias recruited in Syria saved Libya’s Islamist leader from an Egyptian-backed assault. Turkish airpower and the same jihadists supported a surprise Azerbaijani attack on Armenian-populated Nagorno-Karabakh on the one-hundredth anniversary of the previous Ottoman invasion of Armenia. Erdoğan seized schools belonging to ally-turned-rival Fethullah Gülen and turned them into incubators for more radical ideologues.

For too long, the State Department has calibrated its Turkey policy to wishful thinking. Denying reality is dangerous, however. Turkey has changed. Having ruled for nearly two decades, Erdoğan has created a new army in his image. To believe Turkey will return to the status quo ante upon Erdoğan’s demise is naïve: He has also indoctrinated more than thirty million schoolchildren since he first became prime minister.

Turkey is no ally, and it never again will be. It is time to check the power it seeks to exert on the global stage, diplomatically, economically and, when its proxies operate outside Turkey’s recognized borders, militarily as well.