Turkey’s Drones and Proxies are Turning the Tide of War 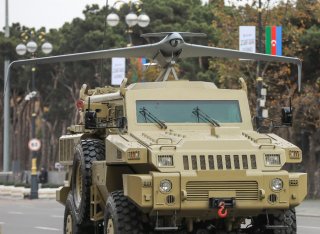 In the fall of 2020, as Armenia and Azerbaijan fought a brutal war in the contested Nagorno-Karabakh region, Turkish-made drones and Syrian mercenaries recruited by Turkey supported the Azerbaijani military on the front lines. While the arrival of Syrian fighters in the Caucasus may have been a shocking development, it was emblematic of the new model of hybrid warfare that Turkey has used to influence regional conflicts and advance President Recep Tayyip Erdogan’s increasingly assertive foreign policy. Through the use of low-cost domestically produced drones and a proxy force of Syrian mercenaries, Turkey has turned the tides of conflicts in Syria, Libya, and the Caucasus and furthered its long-term strategic interests.

Although this approach may be an effective tool as far as the Turkish government is concerned, it has had brutal consequences for those directly impacted. From exploiting the impoverished Syrians it recruited—by lying about their salaries and how dangerous their duties would be—to slaughtering civilians with drone strikes, Turkey’s recent interventions have left a trail of suffering in their wake. Unfortunately, this model will only be used more frequently as Turkey attempts to expand its regional influence and the Turkish domestic defense industry becomes more self-sufficient.

The Evolution of Turkey’s Defense Industry

The development of this model has been driven by Turkey’s rapid advancements in drone technology and Erdogan’s desire to increase the independence of the Turkish defense industry. Since taking power in 2003, Erdogan has made the expansion of Turkey’s defense industry a focal point of both his domestic and foreign policies, taking direct control over the military procurement agency and pursuing close partnerships between the government and Turkish defense firms. As a result of Erdogan’s efforts, between 2002 and 2019, Turkey’s defense exports rose from $248 million to $2.74 billion and the number of Turkish defense companies increased from fifty-six to 1,500.

With drone technology proliferating in the early 2000s, Turkey eagerly purchased drones from Israel in order to target Kurdistan Workers’ Party (PKK) militants. However, Turkey soon grew dissatisfied with its Israeli drones and committed to developing its own.

Recognizing the constraints created by its dependence on foreign arms, particularly its imports from countries like the United States that do not agree with its recent foreign policy decisions, Turkey has prioritized reducing its reliance on imported defense technology. Though it once imported eighty percent of its weapons systems, Turkey now imports only thirty percent and has announced plans to produce all of its systems domestically by 2023.

The rapid growth of Turkey’s defense industry combined with years of tinkering by Selcuk Bayraktar—an MIT engineering dropout who married Erdogan’s daughter and is the namesake of the TB2 Bayraktar drone—allowed Turkey to produce its own advanced drones by 2016. Armed with payloads of up to 120 pounds and able to remain in the sky for up to twenty-four hours, the TB2 has capabilities that rival most drones on the market. Due to a fifty percent reduction in the cost of producing TB2s, it has become feasible to aggressively deploy drones in multiple theaters.

This effort to develop a self-sufficient defense industry, intended to allow the Turkish military to operate on the world stage unhindered by its NATO allies, is a reflection of Erdogan’s rejection of the “zero-problems” approach of the early 2000s in favor of an assertive foreign policy. With the American-led security dynamics that characterized the Cold War and the war on terror continuing to recede, Erdogan has used this opportunity to pursue an expansionist foreign policy aimed at establishing Turkey as a regional power. As a result of this expansionist turn, Turkey currently has forces present in at least nine countries and is involved in more conflicts than at any time since the creation of the modern Turkish republic.

Once a status quo state that cherished the benefits of its NATO membership, Turkey has become an aggressive power willing to jeopardize its relations with long-standing allies. Erdogan’s cavalier attitude toward Turkey’s allies has made it much harder for them to constrain his aggressive behavior. Indeed, Erdogan recently claimed that “Today, Turkey can launch an operation to protect its national security without seeking permission from anyone.” Just in the past year, Turkey has clashed with Greece and France over drilling rights in the Mediterranean, completed its controversial purchase of the Russian S-400 surface-to-air missile system, and provided support for Azerbaijan amid a NATO push for a ceasefire between Armenia and Azerbaijan.

The Rise of the Turkish Model

Turkey formalized its relationship with the Syrian opposition when it partnered with the Free Syrian Army, a coalition of opposition militias now known as the Syrian National Army (SNA), to carry out Operation Euphrates Shield in 2016. As Turkey increased its support for the SNA, it became more dependent on Turkey and adopted a more centralized structure, allowing Turkey to exert influence over the rebels to advance its own foreign policy objectives in Syria.

As Turkey began placing greater focus on combating Kurdish militants in Syria, SNA forces, once solely focused on fighting the Assad regime, participated in Turkish ground operations against the Kurds in 2016, 2018, and 2019. While these operations had limited success in directly combatting the Syrian government, they allowed Turkey and its allied rebels to weaken Kurdish forces and seize control of territory previously held by the Kurds. Turkey’s partnership with the SNA has allowed it to increase its manpower when carrying out operations and deny strategic territory to the Kurds without having to maintain a large-scale military presence in Syria.

Ankara’s use of drones in Syria first garnered significant attention in 2020 when, in response to a Syrian airstrike that killed thirty-six Turkish soldiers, a barrage of Turkish drone strikes destroyed hundreds of pieces of Syrian government armor and reportedly killed thousands of regime soldiers. This five-day drone campaign, employed in concert with a ground offensive carried out by the Turkish military and its Syrian rebel partners, successfully reversed Syrian government gains near the rebel stronghold of Idlib, pushing Russia to agree to a ceasefire in Idlib and allowing Turkish-backed forces to maintain control over the province.

In early 2020, with the Syrian war locked in a stalemate, Ankara turned its attention toward Libya as the internationally recognized Government of National Accord (GNA) was struggling to fend off Khalifa Haftar’s Libyan National Army (LNA). This foray into Libya came just months after Ankara and the GNA inked a military cooperation agreement and a maritime rights deal that could potentially expand Turkey’s maritime claims in waters currently contested by Greece.

With LNA forces laying siege to Tripoli following a successful offensive into GNA territory, Turkey massively increased its support for the GNA by sending at least 5,000 Syrian mercenaries and Turkish-made drones to bolster the GNA’s desperate counter-offensive. By using its network of Syrian fighters, which the Department of Defense says includes individuals “with previous terrorist links,” Turkey was able to quickly mobilize an effective fighting force to send to Libya.

The provision of dozens of technologically advanced drones that the LNA could not counter, and, to a lesser extent, the Syrian fighters that Turkey sent to Libya, played an instrumental role in the GNA’s ability to rapidly push Haftar’s forces back from Tripoli and recapture strategic locations such as al-Watiya air base. Strikes from Turkey’s drones ravaged LNA artillery and supply lines, and swarms of strikes against LNA positions allowed GNA forces to make advances in ways they could not without air support from drones.

Ultimately, Turkey’s intervention kept the pro-Turkey GNA in power by pushing the LNA out of western Libya and pressuring it to agree to a ceasefire just months after it almost overtook Tripoli. With significant strategic and economic interests that were dependent on the GNA remaining in power, Turkey’s successes in Libya have now positioned Ankara to advance its long-term interests in Libya and beyond.

Shortly after the interim government was formed in early 2021, Turkey demonstrated its continued sway in Libya when a high-level delegation met with Erdogan and signed five new memorandums of understanding while also reaffirming the Turkey-GNA maritime rights deal. As Turkish troops and their allied Syrian mercenaries remain in Libya, and Turkey recently built an airbase in al Watiya, Ankara is on the cusp of establishing a permanent military foothold in the country.

In September 2020, with Haftar’s forces repelled and the war moving toward a ceasefire, Turkey exported its model all the way to the Caucasus to support Azerbaijan in its conflict with Armenia over the disputed Nagorno-Karabakh region.

After promising its “unconditional” support for Baku and massively increasing drone exports to Azerbaijan in the summer, Turkey ignored NATO’s calls for a ceasefire when the war began and provided Azerbaijan with Syrian mercenaries from its network of SNA fighters. While the Turkish and Azerbaijani governments deny that Syrian mercenaries have fought for Azerbaijan, the United Nations and an array of reputable media outlets have produced reporting and photo evidence supporting claims that up to 2,000 Syrian mercenaries were sent to fight on the front lines for Azerbaijan.