If the U.S. Economy Booms Would Donald Trump Pass on 2024? 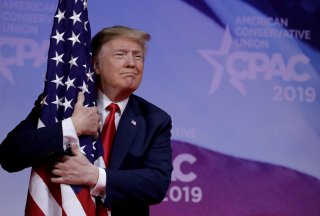 Following former President Donald Trump’s election defeat, he almost immediately hinted at the prospects of a 2024 White House bid and devoted his efforts to turn back both congressional chambers to a sea of red in next year’s midterm elections.

But while Trump clinches an iron-like grip over the GOP, with Republican lawmakers debating whether they should remain loyal or distance themselves from him, President Joe Biden’s soaring approval ratings and effective handling of the coronavirus crisis and economic downturn could be no match for the former president in the 2024 presidential election.

Trump’s most recent tease of another presidential run was at the Conservative Political Action Conference in Orlando, Fla., where he addressed a cheerful crowd of party members and supporters in his first political speech since leaving Washington, DC in January, saying “Actually, as you know, they just lost the White House,” referring to the Democratic Party. “But who knows, I might even decide to beat them for a third time.”

He went on to crow his confidence in a GOP victory in the 2024 presidential election, in which he said, “I wonder who that will be. Who, who, who will that be, I wonder.”

Meanwhile, Biden has taken a full-force approach to mitigating the spread of the deadly disease and to tackling the economic recession that put the unemployment rate in the double digits last year. Biden’s $1.9 trillion American Rescue Plan—that’s packed with federal relief for schools, the unemployed and low- and middle-income households—is slowly making its way through Congress, as Democrats attempt to squeeze the legislation through budget reconciliation, a process that wouldn’t need a single Republican vote.

And the number of people who have received at least one dose of the coronavirus vaccine in the United States reached fifty-four million on Friday, with the nation averaging 2.04 million vaccine doses per day—a milestone that even public health experts and supply chain managers initially doubted.

The Biden administration’s grapple on both crises earned the president approval ratings hovering around 60 percent—a figure that Trump never achieved.

With a restored economy and public health state in Biden’s back pocket in 2024—that is, if he decides to run for reelection—how would Trump, the powerhouse of the GOP, compete with him?

“If Trump wants to run again, a ‘normal’ economy by itself won’t deter him. When he first ran he did so not as an economic manager, but as a vehicle to express, magnify, and reflect grievances. He was the ultimate identity candidate. If he runs again, he'll do the same,” Thomas De Luca, a political science professor at Fordham University, said.

Experts suggested a spate of approaches that Trump may take in a hypothetical 2024 White House race if he and Biden were to face a rematch and even if the economy was restored.

“If the economy is booming, he can always find other wedge issues to run on. He can rally voters by continuing to claim Democrats stole the election, he can point to various cultural excesses on the left, and he can say there might be Supreme Court justices who will retire and they need to be replaced with conservatives. And the Biden administration and congressional Democrats will no doubt have missteps that Trump can highlight,” Kevin R. Kosar, a resident scholar at the American Enterprise Institute, said.

Charles S. Bullock III, a political science professor at the University of Georgia, also said “If Trump runs in 2024, his candidacy may be as devoid of new policy initiatives as his 2020 reelection bid. His promises would, in part, be to reverse changes initiated by Biden that are unpopular with the Trump base. He would promise to complete the wall which he would say would create more jobs since it would fence out illegals who compete for jobs by working for lower wages. He would again promise to bring manufacturing jobs back to the U.S. He would come out against efforts to phase out reliance on fossil fuels, promise to encourage use of coal to put miners back to work.”

During Biden’s initial days of his White House term, he signed a number of executive actions that undid previous executive actions taken by Trump—moves that received critical Republican blows. Among some of the actions were: rejoining the Paris climate accord and the World Health Organization, kicking a plan that limited the Census to citizens, reversing Trump’s travel ban, ending border wall construction and backpedaling on gender diversity training that had been refused by courts.

But one of the last times a politician pursued a White House bid amid a period of economic growth saw brutal losses.

In the 1996 presidential election, incumbent Democratic President Bill Clinton defeated former Senate Majority Leader Bob Dole, the Republican nominee by a landslide, even though Clinton’s election victory chances slimmed in the middle of his term when Democrats lost both the House of Representatives and the Senate in the 1994 election—a Democratic fear for 2022.

Although Democrats lost control of both chambers, Clinton saw mounting success as the economy healed after the early 1990s recession.

Economic issues formed as centerpieces on their campaign trails, with Clinton cautioning voters that Republicans would boost the deficit if elected and reduce federal spending on programs like Social Security and Medicare. Dole spent his time calling for a 15 percent federal income tax cut.

But experts noted that Dole faced tough competition as he battled a successful incumbent with a stiff handling on the economy and as his own “missteps, indecision and strategic blunders” ruined his presidential bid.

“Dole has a lot of strengths and he has fewer weaknesses than people think,” Bill Lacy, a former senior campaign adviser to Dole, told the New York Times in 1996. “But he thinks like a legislator, which means he tends to think in cycles. He is not linear. Every day is new. Every day holds out hope.”

He often acted off-script, where he rambled in the public setting, ignored his teleprompter and answered reporters’ questions when his press secretary left the room. He also couldn’t unite the Republican Party, which largely led to his downfall as a politician.

Despite Dole’s widespread popularity and his attempts to boost his own presidential bid as he saw early victories on his campaign trail, his efforts just didn’t work, and Clinton ultimately maintained the White House.

Experts speculated methods for Trump to avoid a similar type of loss, noting that he’ll probably wait to announce a presidential campaign until there is a clearer indication over whether he has a strong chance at beating his Democratic opponent.

“It is hard to tell how serious he really is about running again in 2024. There is no doubt that he likes to be relevant, and toying with the idea publicly is a surefire way to do that. But whether he really wants to face the possibility of another loss is questionable. He is not a man that likes losing, especially on the biggest of stages,” Monika L. McDermott, a political science professor at Fordham, said.

Kosar also noted, “Trump would [try] to mitigate the risk of being crushed by waiting until the last possible moment to formally announce his run. And if the polls and oddsmakers suggest that Trump faces long odds, he presumably will not run.”

“What would deter him, putting down his stolen election Kool-Aid, is being convinced he cannot possibly win,” De Luca said. “If a rebounded and vibrant economy and a popular opponent, plus his own natural unpopularity, make a loss seem more or less inevitable, then Trump's narcissism will prove the better part of valor. He'll keep people guessing because that's his best ticket to power, funding, and euphoria. But he'll ultimately be relegated, if not to ‘stand back and stand by,’ to try to anoint his successor.”

The larger question that looms, however, is whether Trump and Biden will even run for the commander-in-chief spot since they’ll be 78- and 82-years-old, respectively.

“When the economy is strong, an incumbent president tends to get reelected,” Bullock said. “An unknown item is whether Biden would seek a [second] term at 82 or would it be an open seat?”

Kristi Noem: The GOP’s 2024 Nominee to Take on Joe Biden?