Imperial Pressures: America Must Pass the Buck in Europe 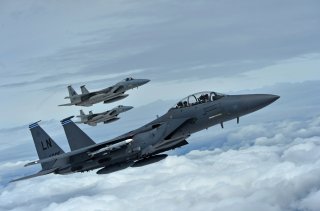 AMERICANS DO not prefer to discuss grand strategy in imperial terms, even though it unwittingly mirrors the historic imperial British strategy of offshore balancing. However, instead of a narrow divide and rule and amoral balance of power, Washington increasingly followed primacy as a strategy in post-Cold War Europe. The atrophy of European muscle was primarily due to American hard power and security guarantees. But it also ensured that there were no great power challengers in Europe itself. Enter “liberal hegemony.” Discarding conservative realism, the United States institutionalized peace. Instead of a stable balance of power and natural equilibrium, that resulted in a continuous primacist military presence in Europe.

This unusual state of affairs has been considered a constant burden by every postwar American president, not to mention that it is a state of affairs at odds with prewar American character and small government republicanism, and has been reflected in the rhetoric of Presidents Dwight D. Eisenhower and John F. Kennedy, to Barack Obama and Donald Trump. Likewise, while the average American voter is not quite isolationist, they are neither imperial nor are they interested in European security. The interplay of these two opposing instincts, along with the changing geopolitical landscape of Europe, is where the dilemma of the American grand strategy lies, as a cohort of populist policymakers and an overwhelming number of Americans are increasingly opposed to shouldering a disproportionate burden of the current security architecture in Europe.

In light of that, the war in Ukraine and the subsequent Russian quagmire indicate two things. One, we are now operating in a functional multipolarity where revanchist great powers are refusing to run by the American-led rules. Russia is just the first challenger. Two, there are no hegemonic challenges in Europe that European powers cannot balance on their own, if they so wish. Threat is a combination of will and capability, and Moscow is incapable of conquering the entirety of Europe, just as Britain, France, Germany, and Poland are capable of harnessing resources and weapons to balance Russia on their own. Realism, therefore, dictates two future options. First, retrenchment and offshore balancing, with minimal footprints, to recuperate, restructure, and focus on a greater rising threat in Asia. While this is the most prudent course of action, it is politically inexpedient. Second, a balance of power, where America depends on a handful of powerful allies to maintain a favorable European balance.

A grand strategy that would entail a sensible middle ground between retrenchment and balance of power should, therefore, first start with discouraging any further enlargement of NATO and the EU. One cannot commit to defend an entity with no fixed borders and mutating imperial frontiers. And with minimal cultural ties that would encourage Americans to sacrifice blood and treasure in case of a great power conflict, asking the United States to defend the real estate of protectorates in peripheral regions with minimal direct strategic significance makes little sense. Applied realism also suggests that Washington should take advantage of this war and prop up power centers within the EU, and elevate, support, and share burden with them.

Britain is, of course, the primary actor ideally poised to catch the buck, with the others being France, Germany, and Poland. Post-Brexit, Britain is yet to find a proper role, and it wants to consolidate the U.S.-UK Special Relationship, get closer to the United States overall, and reforge the Anglosphere. British realpolitik, put simply, dictates a disunited Europe and a free ride on the American hegemony. America should therefore encourage more mini-alliances, smaller in structure and coherent in strategy—think of AUKUS, for example, or the Greco-French entente. As the latest war has highlighted, if the UK, Poland, and the Baltic nations have special defense treaties and arrangements under a detached American security umbrella, it relieves the United States from taking a disproportionate burden and forward presence, just as a Greco-French naval entente stabilizes the Mediterranean. It is in the long-term U.S. interest to deinstitutionalize peace in Europe and return power back to smaller coherent alliances, all within the broader American security umbrella. The United States must encourage Britain to provide guidance and leadership to Poland and the Baltic states in shaping division-level patrolling troops, weapons training, and intelligence, tech, cyber and special ops. This would break up the Brussels/Berlin duopoly that has resulted in strategic stagnation and free-riding, and would encourage rapid military build-up in Paris and London, which in turn will, in turn, further deter Moscow, thus freeing up finite U.S. resources. This perfect hedging position would foster competition among the European powers on who can be genuine allies to the United States. Policy-wise, that would entail special status, weapons platforms, and privileged military sales, cultural exchanges, financial and material aid, training, joint operational platforms and doctrines, and more.

Overall, if the United States intends to maintain a detached preponderance in the European balance, finding allied powers to share even a portion of the security burden, without absolute retrenchment, is the only way forward.