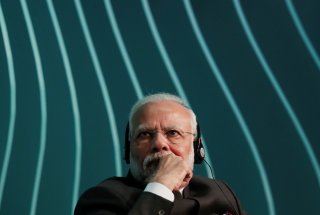 In early February, police arrested Disha Ravi, a twenty-one-year-old college student in the southern Indian city of Bangalore on charges of sedition. The charge stemmed from the tweet she had posted on social media site, Twitter, after slightly amending the activist “toolkit” or action plan that the Swedish climate activist, Greta Thunberg, had shared with Indian farmers protesting a set of farm laws passed last September. After these charges were produced in court, Ravi was remanded into police custody for five days. The law, under which she has been charged, harks back to the British colonial era in India and, ironically, was used against Indian nationalists during the anti-colonial movement.

Ravi’s arrest and detention under this anachronistic law are emblematic of how the government of Prime Minister Narendra Modi has been attempting to squelch any form of political dissent across the country. Though her case has garnered public attention in India and abroad, it is hardly unique. Since Modi’s Bharatiya Janata Party (BJP) government came into office with an overwhelming parliamentary majority in 2019, it has attempted to stamp out dissent using any legal mechanism available to it.

One of the most draconian methods that the government uses is the Unlawful Activities Prevention Act (UAPA), which was passed in 1967 in the wake of significant domestic political unrest. Since then, the legislation has been amended multiple times. The most recent alteration came about in 2019 following which the government could designate an individual as a terrorist without the benefit of a trial. This is, however, not its most harsh provision. Among other matters, the act gives the government sweeping powers of arrest and detention. To that end, it allows the country’s apex investigative body, the National Investigation Agency, the right to detain an individual up to 180 days without a trial. It also includes a provision for the creation of special courts with secret witnesses and closed-door hearings.

When the Modi government introduced and passed the last amendment, the opposition raised questions about many of these provisions. However, with its parliamentary majority, the BJP was able to set aside these objections while issuing anodyne assurances that no human rights would be at peril. These pledges have proven to be utterly hollow as the government’s actions in a number of key instances have also demonstrated. The most egregious of these involves the arrest and incarceration of Father Stan Swamy, an eighty-three-year-old Jesuit priest, who has been detained under the UAPA. The government has charged him with consorting with Maoist guerillas but has yet to produce any substantial evidence against him. What is known, however, is that Swamy has spent a significant part of his adult life as an advocate and activist for marginalized tribal populations in the resource-rich state of Jharkhand home to as much as 40 percent of India’s mineral wealth.

His case, however, is hardly an isolated episode. Earlier, in 2018, charges were lodged against more than a dozen prominent social activists who had participated in a peaceful rally in the western Indian city of Pune. At this rally, referred to as the Elgar Parishad (Congress for Speaking Aloud), the participants had given speeches criticizing various policies of the last Modi government and had also spoken out on behalf of the plight of India’s Dalit (“untouchable”) community.  Subsequently, in early January 2018 at the two hundredth anniversary commemorating a Dalit uprising, violence had ensued in the village of Bhima Koregaon in the state of Maharashtra. The activists were charged with inciting violence and detained under the terms of the UAPA. Many of the activists are still languishing in prison.

Other developments that have taken place in the recent past have ominous portents for both civil liberties as well as academic freedom. The most recent issue involves a directive from the Indian Ministry of Home Affairs to all Indian public universities and government firms. According to this decree, any individual who belongs to either set of organizations when holding online discussions with foreign partners on India’s “internal matters” will have to seek prior permission from the ministry. Needless to say, if this mandate is actually implemented, it will have a profoundly chilling effect on a range of academic discussions and exchanges. Despite protests from prominent academic organizations, the government has not displayed any willingness to back down.

India’s press, which has long been feisty, is increasingly under duress. Even reputed journalists commenting on current developments are now being hounded. Earlier this year, two prominent journalists, Rajdeep Sardesai, a news anchor at India Today television and Vinod Jose, an editor of The Caravan, a long-form print magazine, found themselves in the crosshairs of the government for their reporting on the ongoing farmers agitation in India. Even a prominent opposition politician, Shashi Tharoor, who had tweeted on the protests, found himself swept up in this dragnet and charged with sedition. (Given that these charges are frivolous, they are most unlikely to be upheld in any court. Already, the Indian Supreme Court has issued an order granting them interim relief from prosecution. However, the mere willingness of the government to use existing laws in such arbitrary ways is likely to instill fear amongst most journalists and even opposition politicians.

All these developments collectively amount to a concerted attack on the most fundamental norms and institutions of India’s democracy and underscores the steady shrinkage of liberal space in the country. Even without a formal declaration of emergency of the kind imposed by Prime Minister Indira Gandhi in 1975, civil liberties and personal rights are now increasingly under siege in India.

Indeed, there are remarkable similarities between the political trajectories of Gandhi and Modi. Though they were from very different social and political backgrounds—she came from an elite family and was influenced by her father Jawaharlal Nehru’s Fabian socialist leanings; he had a middle-class upbringing and holds an undiluted commitment to the Hindu religious right—they have much in common. Both exhibit strong personalities; a penchant for promoting their respective personality cults through the exploitation of mass media; a preference for highly centralized decisionmaking; a willingness to undermine freedom of expression and its constitutional protections; and a tendency to ride rough over political opposition. Both also display similarities in foreign policy. Gandhi prioritized economic self-sufficiency, while Modi, though positive about foreign investment, advocates “atmanirbharta” (self-reliance). They have been tough on difficult neighbors: Gandhi dismembered Pakistan through a war in 1971, Modi has been proactive in confronting both Pakistan and China militarily. And both have projected an image of global leadership—Gandhi through the Nonaligned Movement (NAM) and the Group of 77 (G 77) developing countries, Modi and his foreign minister, Subrahmanyam Jaishankar, through multiple strategic partnerships with major powers and the pitching of India as a “leading power.”

One major difference between the two leaders is on the metrics of power. Indira Gandhi’s India was a relatively weak state struggling with economic growth and focused on recovering its military capacity after India’s humiliating defeat at the hands of China (1962). In contrast, Modi’s India is a far more powerful state in both economic and military terms. In 1984, the year Gandhi died, India’s GDP was 3.82 percent of world GDP; in 2019, the proportion had grown to 7.09 percent—and is expected to overcome the current downturn and rise to 7.97 percent by 2030. The latter trend is expected to take India to third rank among global economies by 2030. Similarly, though still well behind the United States and China, India’s share of global military expenditure has grown from 1.52 percent in 1984 to 3.81 percent in 2019. Unlike Gandhi, who tested a nuclear bomb but refrained from building an arsenal, Modi has expanded Indian capabilities and built a nuclear triad while retaining a restrained non-deployed posture.

What implications does India’s current political trajectory have for the future of U.S. foreign policy under Biden? America’s policy toward India has to grapple with two critical and contradictory factors: its’ discouraging domestic political dynamic and its more positive strategic prospects as an economic and military power and emerging strategic partner. With respect to the first, the primary question is whether Modi, like Gandhi, will become more dominant and repressive over time or whether he will step back from an extreme right-wing agenda as popular anger grows, which is what seems to be happening with the burgeoning farmers’ protests on agricultural pricing. Gandhi’s policies were caught between her (and her father’s) desire to build a secure and modern India and her unsustainable insistence on state control as the driving mechanism. Modi and the BJP are deeply committed to a religion-driven transformative agenda that seeks to recast India into a “Hindutva” (Hindu-ness) mold and simultaneously seek growth—an equally unworkable approach that tries to mix economic progress with political reversal. Unlike Gandhi, who decided to call for polls and end the emergency, Modi is unlikely to revert on his own initiative to a more liberal constitutionalism. That said, India has also come a long way from the political environment that led to the emergency. Mass electoral politics will resist the bid to sculpt a uniform entity out of an India that is fragmented into innumerable social groups and requires constant negotiations among its diversities to produce stable governance, which tends inevitably to bring it to a centrist position.