Instead of Democracy Promotion, Sell Trumpism to the World 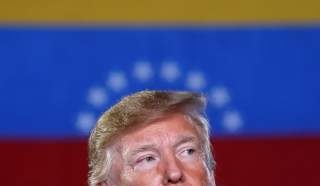 Donald Trump doesn’t believe in regime change or nation-building. He is skeptical of international organizations and institutions. He frets over allies that aren’t pulling their weight.

But Trump is no isolationist, and he’s shown no interest in “leading from behind.”

So what does Trump believe in?

His catchphrase, “America First,” suggests that the president views his job as protecting the vital interests of America. But the slogan itself doesn’t have much explanatory value.

But tweets are not policy. The president’s policies have been neither mercurial nor unreasonable. Trump does, however, need to do a better job selling Trumpism around the world.

“It takes a clear-cut view of the immense challenges faced by the United States from an array of actors, from Russia, China, and North Korea to transnational, largely Islamist terror networks. In addition, the strategy emphatically rules out the idea of extending the hand of friendship to rogue regimes such as Iran.”

The document reveals a president committed to pursuing a “peace through strength” military and leaning forward in critical parts of the world where America’s vital interests are under assault.

Even the president’s recent pronouncements on the way forward in Syria and Afghanistan are not necessarily a reversal of his stated course; they may just portend an adjustment to the American footprint to accommodate a long-term U.S. presence there. But the administration must size the footprint correctly; American cannot afford to repeat the kind of mistake Obama made in withdrawing from Iraq.

Running Out of Gas?

Executing the National Security Strategy requires more than adjusting military deployments, however. Trump faces a combative House of Representatives, confused allies overseas, and foreign competitors who may try to just wait out the Trump presidency.

To keep on track, the White House will need to make better use of the nonmilitary instruments of national power its disposal. To date, the administration has undervalued some of these tools.

In his resignation letter, Defense Secretary Jim Mattis rightly observed that the administration has done a poor job explaining U.S. policies to both friends and enemies. The president can be an unconventional statesmen if he wishes, but that does not absolve him of his responsibility to ensure the world clearly understands his policies.

To date, Trump has made only a handful of big speeches on foreign and national security policy. His August 2017 speech in Warsaw was quite impressive, as was his address on Afghanistan policy, delivered that same month. Trump should do more of these.

The administration’s public diplomacy efforts have been broadly lacking, as well. The White House has shown little sense of urgency about putting its imprint on this mission. Most of the key appointive positions remain vacant or occupied by Obama holdovers.

This is not entirely Trump’s fault. Helle Dale observes that “without fail, every time a Trump nominee gets closer to a Senate confirmation hearing to head the International Broadcasting Bureau, the media pounces and sounds the alarm.” But it is problematic that, for the most part, the White House seems content to do little about it.

This is not to say that Team Trump has touched none of the levers of power beyond troops, tariffs and sanctions. For example, National Security Advisor John Bolton recently laid out an Africa strategy that seeks to make better use of the instruments of engagement, influence and investment. The administration also championed passage of the Build Act, which will “facilitate the participation of private sector capital and skills in the economic development of countries with low- or lower-middle-income economies.”

But the administration still underperforms in selling Trump’s self-help brand of empowerment to America’s friends, allies and strategic partners. Though uninterested in democracy promotion, nation-building or regime-change, Trump wants to see our partners become freer, stronger, more prosperous, and more self-confident partners. He can do to speed up that outcome to America’s benefit.

The Art of the Sale

To keep the National Security Strategy on track, the administration will need to build bipartisan congressional support for U.S. institutions working constructively overseas. It will also need to help build the capabilities, expertise, and capacity of effective nongovernmental organizations and foreign agencies.

This will require a subordinate strategy to harness these institutions in support of the National Security Strategy—like a matryoshka doll that fits neatly inside a larger one.

As with any good strategy, this will require making hard choices and tackling big problems to drive significant change in organizational behavior. Good strategy does not simply catalogue or validate things already being done. Rather it fiercely commits to turning the ship of state in a different direction—toward a clear goal (ends) with a defined path (ways) and the means to get there.

Ongoing diplomatic efforts will have to be reshaped to match the National Security Strategy. What were once called “democracy promotion activities,” just for the sake of promoting democracy, now have to be justified as part of the American effort to manage great power competition.

The overall objective has to be to protect America’s interests by stabilizing global competition, not by remaking the world order. “What is in the best interests of a country?” is a different question than “What’s in best interests of the U.S.?” But efforts to protect U.S. interests should aim for the sweet spot where our goals and those of our partner countries converge. Programs that serve these interests gain the most credibility and legitimacy.

There is, of course, no single solution for achieving better outcomes everywhere. The United States will need to pursue a variety of programs to achieve a cluster of favorable outcomes.

One effort will aim to help our friends and strategic partners strengthen the resilience of their democratic institutions. The focus here should be to reduce corruption and promote good, stable governance and institutions—not to drive particular political outcomes (pushing one political party over another) and agendas (like marriage equality).

Another effort should aim to strengthen the resilience of institutions and infrastructure critical to our friends’ economic and military development. Chinese and Russian “sharp power” poses a strategic threat to many key allies. The administration will need to develop specific objectives to counter this threat.

A second cluster of initiatives should be aimed at our adversaries, exploiting their weakness and lack of credible institutions. Authoritarian regimes in Iran, Russia, and China pose the chief threats to regional stability today. Such regimes are most constrained when they feel pressure from within and without, simultaneously. Hence, it makes sense to support reform from within while exerting external pressure. Further, by understanding their instruments of internal repression, we better understand the means of repression these regimes export and how to deal with them most effectively.

The third cluster should aim to build capacity in states strategically relevant to Washington. What’s not needed is a quixotic effort to promote democratic ideology per se. Rather, we should promote legitimate, accountable institutions of governance.

Democracy is predicated upon the legitimacy of government for the governed. If, for example, the Muslim Brotherhood is voted to power, describing the country as a “democracy” is unhelpful because that country will bring poor leaders to power who will poorly serve the people.

As Cliff May of The Foundation for the Defense of Democracies has noted, it is not enough that a regime don the “trappings” of democracy (such as elections). What’s needed is “legitimate governance.” Ends ought to be framed and measured in these terms. Also, building weak regimes’ capacity for good governance will entail battling Russian and Chinese “corrosive capital.”

Whether dealing with friends or enemies, America must be in it to win it. China, Russia, and ISIS see themselves as engaged in a decades-long struggle. So, too, must the United States. This will require developing phased short-, mid-, and long-term objectives.

Since the goal is managed competition and since many competitors led by adversaries will be around a long time, this is actually a generational challenge. Thus, even as the administration addresses immediate challenges, it must also plan for long-term, such as laying the “seeds of democracy”—like the “grassroots” work done by the National Endowment for the Democracy to identify and nurture democratic champions in countries relevant to U.S. foreign policy.

U.S. strategy clearly states that American power should be focused to ensure peace and stability in Europe, the Middle East, and the Indo-Pacific. But capacity-building efforts need not necessarily be focused in those same regions. For example, they might be more critically needed to ensure that democracy has a firm foundation in our own backyard, making the transatlantic community and Latin America the highest priority.