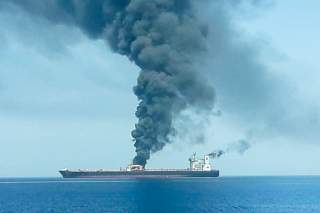 Iran’s military warned it could stop oil shipping through the Straits of Hormuz on Monday, the same day it also warned that it would increase its stockpile of enriched uranium beyond the 2015 Joint Comprehensive Plan of Action (JCPOA), also known as the Iran deal, limits. Coming in the wake of the June 13 attack on two oil tankers, which the United States has blamed on Iran, Tehran is now presenting the Trump administration with its greatest challenge in two and a half years.

Since coming to power in 2017, President Donald Trump has rooted his foreign policy in a doctrine that includes threats and an instinct to overturn traditional American foreign policy rhetoric and action. This can be seen in the U.S. decisions to move the U.S. embassy in Israel to Jerusalem, leave the JCPOA, withdraw from treaties, walk away from UNESCO, slap tariffs on China, threaten Mexico over immigration, and even the December 2018 announcement that the United States would leave Syria. Not every sudden policy shift turns out the way Washington expects. Trump’s instincts have played well with the foreign-policy team that he has had in place since March 2018, and even when Trump has walked back decisions like the one in Syria, it has been done quietly and without admitting a policy reversal.

Iran now presents Washington with its first real nightmare scenario. It has called Trump’s bluff. U.S. Secretary of State Mike Pompeo said on June 13 that Iran or its proxies were responsible for a May 12 attack on four commercial ships, a May 14 attack on Saudi Arabian oil pipelines, a rocket attack in Baghdad, Iraq, and an attack in Afghanistan.

Since early May, Washington has warned Iran against any threats to the United States or U.S. allies. “The United States is not seeking war with the Iranian regime, but we are fully prepared to respond to any attack, whether by proxy, the Islamic Revolutionary Guard Corps [IRGC] or regular Iranian forces,” National Security Advisor John Bolton said on May 5. The USS Abraham Lincoln Carrier Strike Group was in the Middle East in case of any eventuality. Pompeo traveled to Iraq on May 7 to discuss Iranian threats. After the May 12 sabotage of four ships off the coast of the United Arab Emirates in the Gulf of Oman, the United States concluded that Iran was “almost certainly” behind the attacks and that “the point is to make it very clear to Iran and its surrogates that these kind of actions risk a very strong response.”

The June 13 attack against two oil tankers appears to challenge U.S. assertions that there will be a “strong response.” During the June 13 incident, which occurred just after sunrise, a U.S. Reaper drone was fired on by Iran after it flew to monitor a distress call by the Front Altair oil tanker. The USS Bainbridge assisted in the rescue of crew from the Kokuka Courageous and photographed an alleged limpet mine on the ship. Later the U.S. Navy showed footage of the IRGC removing the mine with one of their fast boats.

Pompeo asserts that the attack is an unprovoked assault on international peace and security and a violation of freedom of navigation. It is difficult to imagine another case where a country could attack two oil tankers in international water and fire at a U.S. drone and not receive a response. Iran appears to have gambled that a month after the United States ramped up rhetoric in May, that Washington doesn’t want war. In fact, the administration has said repeatedly it does not want a conflict, but does want “maximum pressure” on Iran.

The problem for the United States is that Iran was already planning to break through the “maximum pressure” campaign on the eve of the tanker attack. Tehran announced on June 10 that it would join the Shanghai Cooperation Organization, a group of eight member states where Iran is an observer at a meeting on June 14 in Bishkek, Kyrgyzstan. Then Iranian president Hassan Rouhani would head to Tajikistan for a meeting of the Fifth Summit of Heads of State of the Conference on Interaction and Confidence Building Measures in Asia (CICA).

At these meetings Iran met with heads of state from Russia, China, Turkey and other important regional countries. Iran hailed these talks as “fruitful.” The meetings challenged U.S. global hegemony and argued for a multipolar world. The United States already is experiencing tensions with Turkey, China and Russia, all of which were present with Iran. Iran also claimed that the United States was violating “all the international structures and rules” and that the United States posed a risk to global stability. If Washington thought that Iran was isolated, these two meetings just a day after the serious oil tanker escalation, showed that Tehran felt there would be no response. The Iranian foreign minister and president wouldn’t be out of the country from June 14–16 if there was a risk of war. Tehran was counting on the fact that the United States would not respond.

Iran has also been increasing its rhetoric about leaving key parts of the JCPOA, including increasing its uranium enrichment. While the United States has phoned regional powers, including Iraq, to share its assessment about the tanker attack, Iran appears to be thinking far more regionally and globally. This includes its threat on June 17 that it could stop oil traffic through the Straits of Hormuz. The United States has said this won’t happen.

Trump’s reaction to Iran’s actions was relatively muted. He has retweeted a tweet from Sen. Marco Rubio condemning Iran and Iranian-backed Houthi rebels in Yemen for attacking Saudi Arabia. U.S. Senator Tom Cotton and Representative Adam Kinzinger have also called for retaliatory strikes. But the United States must weigh these calls against the uphill struggle of convincing allies that there is will to confront Iran. Domestic politics mitigate against a strong U.S. response, including opposition from Democrats and media members where the Gulf of Oman incident resembles the Gulf of Tonkin incident in 1964 that increased U.S. involvement in Vietnam. New York Times columnist Paul Krugman mocked the incident as the “Gulf of Trumpkin.”

Iran’s challenge also coincides with the United States seeking to push a summit in Bahrain for June 25–26 with Arab states to discuss support for the “deal of the century” and the Palestinians. Iran and its allies, such as Hezbollah, have condemned the meeting and Iran has accused Bahrain of “betrayal” for hosting it. Iran is gambling on the fact that Washington is wary of conflict, which could bring instability. It has scripted its uranium stockpile announcement to coincide with the end of the Bahrain summit. It says it will surpass the 300 kilograms of uranium stockpile limit imposed by the JCPOA on June 27. That announcement has likely set another impending crisis in motion.

The United States is also hamstrung in confronting Iran because of the potential breadth of the battlefield that could erupt. Already the Houthis are increasingly targeting Saudi Arabia with drones, and a U.S. Reaper drone was downed over Yemen recently as well. In eastern Syria, U.S. officials and Saudi Arabia’s Minister for Gulf Affairs Thamer al-Sabhan recently toured areas in discussions apparently linked to Riyadh’s support for stabilization initiatives. The United States is still involved in discussing a safe zone with Turkey and dealing with the fallout of Ankara’s S-400 acquisition. Tensions with Iran in Syria could spill over, or Iran could use its proxies to harass Israel, which has recently conducted more airstrikes in Syria. In addition, the United States, Russia and Israel are meeting in Israel in late June.

While the maximum pressure campaign against Tehran can continue, the lack of response to two serious incidents in the Gulf, on May 12 and June 13, is likely to embolden Tehran. Iran wants to take back the initiative after being concerned for the entire month of May about U.S. threats. Iranian-backed paramilitaries in Iraq, for instance, made clear they did not seek a conflict with the United States in May after months in which they had been threatening U.S. forces. Summer is bringing a new challenge for the Trump administration, who now is wrestling with Iran in a way it has not had to wrestle with other challenges. This kind of brinkmanship is Iran’s forte, it has conducted this mix of bluster and asymmetric actions since the 1980s, counting on most powers not wanting a real conflict with Tehran. At the same time, it has cultivated increasingly close relationships with Turkey, Russia and China, all countries that now have their own tensions with Washington. Overcoming this challenge is now the Trump administration’s largest hurdle and one that could become increasingly complex throughout the Middle East.