It’s Not Just Mali: French Influence in Africa Is Collapsing 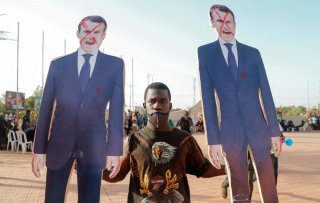 Today, many Africans view the French as irrelevant if not persona non grata in many countries in which they once held sway. Earlier this month, for example, thousands of Malians celebrated the French ambassador’s expulsion in the capital city, Bamako. When French foreign minister Jean-Yves Le Drian called the elected military junta “illegitimate” and “out-of-control,” Malian military leaders ordered Ambassador Joel Meyer to depart the country.

This is not to say that Paris does not have a point: frustration with Bamako has grown steadily. French troops deployed to the West African country in January 2013 to fight a Tuareg insurgency that an Al Qaeda-affiliated group exploited to seize territory in the country’s north. While Mali was once one of Africa’s most democratic nations, it has spiraled into a morass of poor governance and insurgency feeding off each other. Recently, the Malian junta contracted out security to Russia’s paramilitary Wagner Group, an outlet known to commit human rights abuses and pillage local resources. French troops, meanwhile, are on their way out from the country.

The French divorce from Mali is increasingly becoming the rule rather than the exception. Increasingly, France’s more-than-a-century-long diplomatic dominance in Africa is ending, and with it, France’s pretension of being a major player on the world stage.

Consider the Central African Republic: One year ago, rebels in the resource-rich, former French colony threatened to sack the capital Bangui. The United Nations, which has a robust peacekeeping force in the country, stood aside, as did France. Rwanda, with one-fifth the population of France and an army less than one-tenth the size of France’s, ultimately came to the rescue and stopped the rebel advance, pushing the Islamist rebels back into the hinterlands. From the locals’ perspective, French inaction compounded a betrayal marked by late President Valéry Giscard d’Estaing’s support for local dictatorship in exchange for a supply of Central African diamonds into French coffers. Although a generation of French policymakers have believed they could loot and run roughshod over the Central Africans, they have learned that Central Africans have long memories.

Then there is Rwanda itself. While Rwanda was originally a Belgian colonial possession, France treated it as its own following the country’s 1962 independence. French policy, however, was twisted. Declassified French archival documents and an assessment of newly-available sources now show beyond any reasonable doubt direct French complicity in the 1994 anti-Tutsi genocide. France’s motives? Distrust of Rwandans seeking greater ties to the Anglophone world as well as President Juvénal Habyarimana’s willingness (under whom Hutu militants planned the anti-Tutsi Genocide) to subordinate Rwandan interests and human rights to French requests. While Hollywood successfully depicted some of the horror of the 1994 genocide, the producers omitted French advisors training and even manning checkpoints with Hutu génocidaires. It is now clear there likely would have been no genocide in Rwanda had it not been for the cynicism of French president François Mitterrand.

Contemporarily, President Emmanuel Macron has said troops withdrawn from Mali will redeploy elsewhere in the Sahel. But it is unclear how long they will be welcome. Chadian president Idriss Déby’s death while fighting Islamist militants removed a stalwart French ally. However, Macron and the Quay d’Orsay’s support for Déby’s son Mahamat may backfire at the expense of future French influence. Burkina Faso, Niger, and other Sahelian countries watch their neighbors carefully. Momentum matters. They will not hesitate to kick France while it is down, especially if alternatives exist.

France’s unwillingness to recognize regional competition has also taken its toll. Djibouti, for example, was once France’s strategic backstop. Until a decade ago, Djibouti was home to the 13th Demi-Brigade of the Foreign Legion. It subsequently moved to the United Arab Emirates and then back to France. Meanwhile, China has become the dominant influence in the former French colony. Nor is China alone. Turkey is using anti-French, anti-colonialist rhetoric to cultivate former French colonies across Africa. In the most infamous example, Ahmet Kavas, the Turkish ambassador to Chad, lauded Al Qaeda in the Islamic Maghreb and accused French troops fighting them of being the real terrorists.

The hemorrhage in French influence is now obvious, but it has been in the works for years.

For Washington, two questions arise. The first is why France ignored warning signs, and whether something similar could happen to the United States’ influence. While the United States does not have a colonial legacy in Africa, it does have a history of supporting Cold War and Global War on Terror-era human rights abuses that Washington may have forgotten but locals in various countries have not. The second is the price of complacency. France should never have allowed China to out-compete it in Djibouti, nor should it have allowed Turkey to cultivate more influence in many Francophone countries than France itself.

Another question for American policymakers then becomes whether they are fine with China, Iran, and Turkey filling France’s leadership gap. Although the White House and the State Department may publicly deny something to that effect, both agencies appear unwilling to do anything to avoid a similar outcome.