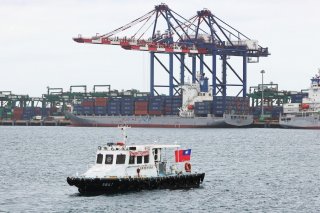 The discouraging end to the war in Afghanistan sent a shudder through U.S. relationships around the world, most importantly with Taiwan, where some are questioning the fidelity of the United States’ commitment. Chinese propaganda immediately seized on the implication that America could abandon Taiwan just as it did Afghanistan, should China invade the island. The Taiwan Strait is already seeing an escalated show of force by the two great powers. How can Washington reassure one of its most important allies in Asia without getting into catastrophic conflicts with Beijing?

At this unique moment, the answer may lie in trade rather than foreign policy. Washington and Taipei have been flirting with the idea of a free trade agreement for two decades. None has yet come to fruition. In a new policy brief, we argue that tying the knot on bilateral trade would not only make economic sense but also advance strategic interests for both the United States and Taiwan. The doubts fueled by the chaotic U.S. pullout from Afghanistan make this move more urgent than ever.

While the economic rationale for freer trade has been widely understood for centuries, it’s often the non-economic factors that drive the formation of trade agreements. In their seminal 1993 paper, political scientists Joanne Gowa and Edward Mansfield articulated the strategic factors critical for trade agreements: Because cross-border trade benefits both parties, countries are motivated to help enrich allies who share their values. When it comes to their adversaries, not so much. That’s part of the reason few countries trade with North Korea; Kim Jong-un’s regime would spend the gains on its nuclear program.

So the question for Washington is this: Are the United States and Taiwan truly allies, and if so, is a stronger Taiwanese economy in our interest?

If President Joe Biden’s first-ever invitation for a Taiwanese envoy to attend a presidential inauguration didn’t make this clear enough, look to the words of the Chinese Communist Party (CCP). We use the Policy Change Index, an open-source machine learning tool that reads the tea leaves in CCP propaganda, to gauge the tone and tenor of Beijing’s treatment of the U.S.-Taiwan relationship. China and its disputed claim to Taiwan is a defining feature in the relationship, making Beijing’s propaganda a proxy for the strength of Washington’s ties with Taipei.

The data show that the CCP’s change of attitude toward U.S.-Taiwan relations started with Beijing’s tacit acceptance of the island’s status. In 2004, shortly after former President Hu Jintao came to power, China’s Taiwan policy took a marked turn, pivoting from emphasizing reunification to merely thwarting any attempt by the Taiwanese government to proclaim independence. China is apparently okay with Taiwan’s de facto independence; what matters in Beijing is that Taiwan doesn’t declare so.

Since then, China’s official gazette has rarely talked about its rivals’ bilateral ties. But when it does, it’s often to condemn any official contact between Washington and Taipei, revealing an increasingly negative sentiment over the warming U.S.-Taiwan alliance in the past two decades. When Lee Teng-hui, Taiwan’s first elected president, made his first trip to the United States in 1995, China’s mouthpiece condemned him as a “separatist” for days. Last year, when then-Secretary of State Mike Pompeo congratulated Taiwanese President Tsai Ing-wen on her inauguration, the action was deemed by Beijing to be interference in its internal affairs. So from the Chinese perspective as well as from the American one, Washington and Taipei have become closer allies.

There’s no question that a stronger Taiwanese economy would benefit America’s strategic interests in Asia. This is a sentiment acknowledged by every U.S. president in recent memory and recently underscored by Taiwan’s rising dominance in semiconductor chipmaking, a critical industry that feeds the U.S. technology and manufacturing sectors. But given the recent developments in Afghanistan, a staunch reaffirmation of U.S.-Taiwan bilateral ties is crucial.

Nation-building may not be a strong suit of the United States—or any other country for that matter—but economy-building is. A trade agreement fits squarely in the common denominator between the economic and strategic interests of both the United States and Taiwan. As China sows doubt about America’s resolve to uphold its overseas commitments, now is a good time to underscore our economic commitment and tie the knot on trade with Taiwan.

Christine McDaniel is a senior research fellow with the Mercatus Center at George Mason University and former deputy assistant secretary at the Treasury Department.

Weifeng Zhong is a senior research fellow with the Mercatus Center at George Mason University and a core developer of the open-source Policy Change Index project, which uses machine-learning algorithms to predict authoritarian regimes’ major policy moves by “reading” their propaganda.