It’s Time to Get Serious About Tackling Electoral Violence 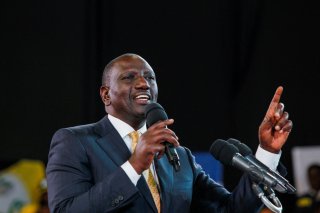 As Kenyans prepare to cast their ballots in next Tuesday’s election, the risk of violence hangs over the outcome. For decades, Kenya’s elections have been flashpoints for inflammatory political rhetoric, state-sponsored violence, and tribal conflict. This year, intensifying partisan divisions, mistrust of the electoral body, and disinformation spreading on social media are all fueling a potential conflagration. Hopefully, 2022 will not be a repeat of 2007 or 2017. But the fact that Kenya’s democracy is again on the knife’s edge calls for a greater focus among U.S. policymakers on the threat of electoral violence—and emerging evidence that can help mitigate it.

Electoral violence is a widespread and fundamental challenge to the democratic process, particularly where electoral institutions are fragile or lack legitimacy. According to the Election Violence (ELVI) Indicators and Forecast Dataset, violent events marred 54 percent of the elections conducted in 2020. Kenya’s election is just the first in a series of elections over the next year at risk for violence, a list that includes Angola, Bosnia and Herzegovina, Brazil, Somaliland, Nigeria, Sierra Leone, Zimbabwe, and South Sudan.

Second, successful interventions are led by individuals who are viewed as credible interlocutors in their communities. In Malawi during the 2014 elections the Public Affairs Committee (PAC), an organization of religious leaders, effectively called on partisan actors to engage peacefully ahead of, during, and after the election. PAC held meetings with political parties, mediated disputes, and convinced the main presidential candidates to reject violence. PAC’s success in helping mitigate electoral violence, in spite of a contested result, was attributed to its religious affiliation and perceived moral authority.

Third, interventions designed to mitigate electoral violence should integrate an enforcement mechanism. For example, a common intervention method involves convincing political leaders to publicly commit to non-violence pacts, on the theory that political leaders will subsequently incur reputational costs if they break their pledges. Yet, in many contexts, reputational costs alone do not deter leaders from betraying their commitments. How then should policymakers design these pacts?

The Ghana Political Parties Program (GPPP), a coalition of political parties, provides one model for institutionalizing enforcement. The GPPP establishes a code of conduct ahead of each election and party leaders meet once a month to review candidate compliance. The GPPP does not rely on legal mechanisms to hold signatories accountable, but on “naming and shaming.” The threat of a public rebuke by the GPPP has appeared to reduce Ghana’s incidence of electoral violence.

Finally, interventions need to integrate the pre-election and the post-election periods into their design. Many, if not most, interventions start too late, applying short-term programming to long-term challenges. For example, civic and voter education campaigns aim to shape attitudes and behaviors among key constituencies ahead of an election. But changing attitudes and behaviors cannot be done in weeks, which is what such programs are often allotted. The voter education campaign ahead of Kenya’s election in 2017 appeared to fail for a number of reasons, including poor outreach. However, the effort also started too late in the electoral cycle.

This points to a general need to design interventions for the entire election cycle, including the candidate nomination, election campaign, election day, and the post-election period. Doing so is important not only to address any violence that takes place before and after election day but also to allow interventions time to generate effects.

Interventions designed to mitigate electoral violence are more likely to succeed if they are given time to take root, if they are co-created with credible local partners, and if they respond specifically to the power dynamics in specific contexts. As we await the election results in Kenya and hope that past cycles of violence do not reassert themselves, policymakers should reassess how we can best help our international partners reduce violence and safeguard free, fair, and peaceful elections.

Keith Proctor is the Technical Advisor for Evaluation and Research at IRI. He has more than 15 years of experience working on conflict and stabilization, including lengthy stints in East Africa. He previously worked at the U.S. Department of State, at Mercy Corps, and as a researcher at the Feinstein International Center at Tufts University.

Prakhar Sharma is senior researcher at IRI. He focuses his research on political violence within the context of democratic elections and non-democratic transitions. He conducted field research in Kenya in 2021 to assess vulnerabilities to electoral violence.