Is It Time for Europe to Reopen Its Embassies in Syria? 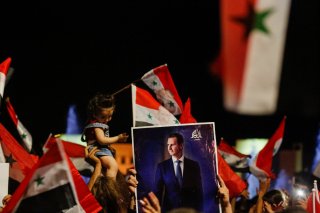 After more than a decade of trying to remove President Bashar al-Assad from power, European governments have continued to ignore the reality on the ground: the Syrian government is here to stay for the foreseeable future. As more and more embassies reopen in Damascus, European ones are conspicuously absent. Has the hour come for chancelleries north of the Mediterranean to change their course and send their diplomats back to Syria?

When Western foreign ministers and European Union officials speak about Syria, they often claim to be speaking (if not acting) on the behalf of the rest of the world. Such was the case when France’s President Emmanuel Macron, in front of the European Parliament, proclaimed that airstrikes in April 2018 were “for the honor of the international community.” But this sentiment is increasingly out of step with reality. Apart from Russia, China, and India never having broken off their ties, others have already mended theirs. In 2011, when fighting first broke out, the Arab League voted to suspend Syria yet the Arab world is quickly changing its tune. Not only have Egypt and Algeria both supported the Syrian state explicitly, but Gulf monarchies such as the United Arab Emirates, Kuwait, and Bahrain have also reversed themselves and reopened their embassies with direct flights between Damascus and Dubai having already commenced. If some former backers of the Syrian opposition can abandon a failed policy, why not Western ones as well?

In Europe, the desire to re-establish diplomatic ties already exists in many quarters. Greece appointed a Special Envoy for Syria in May 2020 and a year later Cyprus has begun renting a property to be turned into a new embassy. Meanwhile, the Czech Republic never withdrew its ambassador and in fact, continues to act as a protective power for the United States in the war-torn country. Hungary, Poland, Austria, and Italy are just some of the countries that have hinted at wanting to adopt a new policy but have not taken the leap to full normalization yet. With the continued passage of time, holding out for phantom “moderate rebels” that will somehow replace the existing state is not only naive but also actively prevents effective and smart engagement.

As Denmark strips some Syrians of their residency permits on the basis that Damascus and its surroundings are safe, most European governments continue to bury their heads in the sand. No major rebel group or alliance is currently threatening the existence of the state anymore while the best armed non-state organization, the Kurdish-led Syrian Democratic Forces (SDF) in the country’s north, has begun its own rapprochement with the government. Local actors recognize that the monopoly on the use of force is unabatedly being concentrated in the hands of the central authorities.

For the family of nations, in order to address all the major challenges that the Eastern Mediterranean nation faces, diplomatic relations are a prerequisite. Refugee resettlement, mass vaccination, ensuring the stability of Lebanon, and counterterrorism are just a few of the issues where having experienced ambassadors on the ground can make a crucial difference.

Who does the current policy help? Aside from politicians grandstanding on the issue as well as refusing to admit that their policies have failed, it is difficult to find any beneficiaries aside from those early supporters of regime change. Diminished influence, reduced intelligence, and increased irrelevance are the outcomes of the European non-presence in the ancient city.

Reopening embassies should not be a goal in and of themselves but merely a first step to assisting in the development of a postwar Syria that is vital not just to the millions of Syrians directly affected but to the Middle East and Europe as well. Aid projects funded by foreign ministries, such as the Czech embassy’s funding for the restoration of the monastery of St. Tekla’s orphanage, provide an entryway to healing wounds and deep suspicions that have come about after ten years of proxy warfare. Though it is unlikely to return to pre-2011 levels anytime soon, it is worth the effort. Better to jaw-jaw than war-war.

With hundreds of billions of dollars needed to rebuild the country, Syria has the potential to be the testing ground for a new type of reconstruction. Since no single country can or will bear the cost, it offers the opportunity for a truly global effort that can bring together states that backed different sides of the conflict. Why should Europe, with its financial and human capital, sit out when the rest of the world is marching onwards? As the rise of jihadi movements in Syria and the pandemic have shown, few challenges are just local or even regional; the same is true for their solutions.

In order to reopen embassies, European governments will need to brave the inevitable criticism that will come from Washington. Yet, it is better to receive stern critiques for a few days than repeat a decade of bloody failure.

Naman Karl-Thomas Habtom is the Senior Vice President of the Cambridge Middle East and North Africa Forum, managing editor of Manara Magazine, and a writer with a focus on security policy and international affairs.