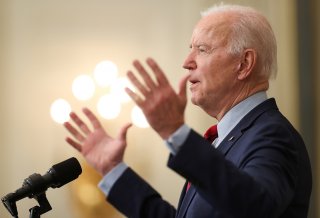 The ”Lippmann Gap” is a phrase coined by scholars to describe the result of a country’s aims in foreign policy exceeding the means available to pursue them. It was named after the twentieth-century journalist, philosopher, and frequent adviser to leading politicians Walter Lippmann, who called attention to its frequency and dangers in his classic 1943 book, U.S. Foreign Policy: Shield of the Republic.

Troublingly for Americans, and for other countries that have long relied on the United States for protection, evidence has emerged that the gap could soon return in a big way under the Biden administration—whose principals, including those of the president, are typically described as diplomatic “adults in the room” making the welcome return to power after the dangerous tumult of the Trump years.

The evidence consists of reporting that the Biden administration later this spring will submit a defense budget request that seeks no new funding over last year’s levels. Of course, this reporting may turn out to be inaccurate. Or “the Bidenites” could still change their plans even if it is currently accurate. In addition, negotiations with Congress, which needs to approve these plans, could result in some increases.

Moreover, a flat defense budget request is by no means necessarily bad news for any American, except for whichever defense contractors lose expected sales to the Pentagon. For example, the Defense Department has long been notorious for wasteful spending. And adopting different priorities, or more efficient weapons and other equipment could well provide America and at least most of its allies with just as much “bang for the buck” as previously, with changing circumstances producing a shift in deployments from missions judged to have lost some of their importance to missions seen to have become more significant. In fact, major cuts are beneficial precisely because the nation spends way too much time seeking objectives—like shoring up the defense of Western Europe—which haven’t been necessary in decades, and indeed in theory create greater dangers than they can address.

But there’s no reason to think that such considerations would be driving forces behind a reported Biden defense spending freeze or near-freeze. And this is where the Lippmann Gap enters the picture because there’s every reason to believe that President Joe Biden intends to expand America’s foreign defense commitments overall. After all, in at least one major region of concern, China, America’s main potential enemy, keeps strengthening its military and has been acting more aggressively in recent years. Due to China’s expansionist aims, Taiwan has become the manufacturer of the world’s most advanced semiconductors and the microelectronic brains of ever more civilian and defense-related products.

Biden’s repeated globalist assertions that “America is back,” in particular, is aimed at reassuring U.S. allies around the world that have become unnerved about U.S. reliability after four years of being harangued by Trump attacks on their own skimpy defense spending, and threats to leave them in the lurch unless their alleged free-riding ends? In some noteworthy ways, Trump actually bolstered America’s alliance-related foreign military deployments.  Biden, meanwhile, has decided, at least for now, to let Europe’s members of NATO—the North Atlantic Treaty Alliance—Japan, and South Korea off the burden-sharing hook.

Indeed, a flat or even reduced Biden defense budget request might come about in part from pressure from Democratic progressives to cut spending significantly. Fifty House members from his party have just urged him to reduce the defense budget “significantly.” And their rationale has nothing to do with the aforementioned potentially sensible reasons for cuts. Their case for a smaller U.S. military emphasizes that

“Hundreds of billions of dollars now directed to the military would have greater return if invested in diplomacy, humanitarian aid, global public health, sustainability initiatives, and basic research. We must end the forever wars, heal our veterans, and re-orient towards a holistic conception of national security that centers public health, climate change and human rights.”

Many of these particular aims are in America’s best interest as is developing new definitions of national security and how to achieve and maintain it. But the traditionally globalist Biden administration seems likeliest not to redefine national security significantly, but at most to add these new domestic-oriented objectives on to the existing list of traditional goals. Therefore, if the progressives get even some of what they want, the effect inevitably would be to assume that “diplomacy, humanitarian aid, global public health, sustainability initiatives, and basic research” can substitute adequately for military force in carrying out an American foreign policy agenda that will be growing again after the Trump pause, not contracting.

The truth is that U.S. adversaries have never appeared impressed with these forms of what political scientists call “soft power.”  Hence China has continued to boost its military budget, and Russia responded to Obama administration Europe troops cuts by invading Crimea and attacking Ukraine.

U.S. allies are reacting skeptically, too. For example, European leaders evidently worry that Trump’s election revealed a strong popular U.S. desire to shed many global defense burdens that the Biden victory hasn’t eliminated. Therefore, there’s been increasing talk, anyway, in their ranks about reducing reliance on U.S. hard power by building up their own. And that would be great for Americans, as it would relieve them of the many economic costs of big defense budgets and of the nuclear war risks deliberately created by the longstanding policy of extended nuclear deterrence.  But the Biden plans that have been made public have never mentioned any of these possibilities, let alone endorsed them.

A defense budget request fully reflecting the president’s bold “America is back” vow wouldn’t be the best plan but it would be far better than one that reopens or widens a Lippmann Gap—one that indicates to both domestic and global audiences that Biden means to carry out globalism on the cheap.