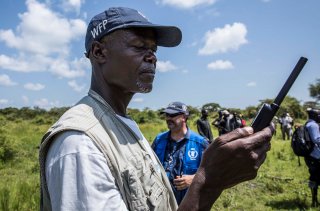 The Biden administration has a full foreign policy dance card, from rebuilding alliances to reasserting U.S. leadership in multilateral institutions. Engaging actively with African nations must be an important pillar of this agenda, and it was encouraging to see President Biden address the February African Union Summit.  As we begin to emerge from the pandemic and countries prioritize rebuilding their economies, leveraging the potential of digital technologies will be critical. Just as Africa needs to share in the distribution of life-saving vaccines, the continent needs a place at the digital table.

African entrepreneurs have already risen to the challenge, creating innovative digital solutions to pandemic-induced challenges. Their efforts could be super-charged by investments in an enabling environment and digital infrastructure that deliver lower-cost data and broader access. Over twenty-five African governments set up e-learning tools for students affected by school closures and, according to the WHO, Africa accounts for almost 13 percent of all new or modified technology created to mitigate the coronavirus.

But it’s not enough. While there are hotspots of digital brilliance across the continent, Africa needs digital transformation that transcends all sectors. That transformation will require a sound policy framework, as well as both hard and soft infrastructure as outlined in studies like Google’s Digital Sprinters. The report highlights several policy recommendations that fall into one of four buckets: physical capital, human capital, technology, and competitiveness. The Biden administration should build on growing interest from large American tech companies and encourage investments into digital infrastructure to help close the funding gap, including the $100 billion needed to reach universal broadband connectivity by 2030 to meet rising demand. Africa also needs an additional seven hundred data centers, and while Lagos, Johannesburg, Cairo and Nairobi have attracted investment in data centers, second-tier cities face considerable difficulty. The Biden administration’s digital policy could help de-risk those markets. The administration should also work with African governments and regional bodies to help shape the global digital architecture to support the expansion of data privacy laws and cybersecurity, thereby advancing inclusive digital governance, promoting innovative uses of data, and elevating U.S. digital diplomacy.

Fewer than a quarter of Africans have consistent access to the internet, a five-fold increase since 2000, but the continent lags behind East Asia (55 percent) and Latin America (66 percent). While some markets like Kenya have sprinted out of the gate, with close to 90 percent internet penetration, white-spots persist across the continent. Almost 50 percent of Africans live more than ten kilometers from a high-speed terrestrial fiber-optic network, and only 17 percent of Africa’s population can afford one gigabyte of data each month. India, by contrast, provides the cheapest data in the world, thanks in large part to Mukesh Ambani’s efforts to bring millions of Indians online, primarily via mobile.

Despite this incomplete transformation,  the economic dividend is significant: mobile technologies have generated 1.7 million jobs in Africa and contribute about $144 billion to its gross domestic product (GDP). The International Telecommunication Union found that a 10 percent increase in broadband penetration in Africa would trigger a 2.5 percent increase in GDP per capita. In a recent analysis with the World Bank, Google found that Africa’s internet economy has the potential to reach $712 billion by 2050—about 8.5 percent of the continent’s GDP.

The African Union’s Digital Transformation Strategy has informed similar policy documents for many of its members, but these efforts have historically been underfunded. African governments have earmarked barely 1 percent of GDP on digitization, while advanced economies devote about 3 percent to this critical sector. Outside capital is required to make significant progress.

The Biden administration should look to significantly expand the U.S. government’s one billion dollar Connect Africa initiative and make digital infrastructure a major focus of USAID’s Prosper Africa trade and investment program. These additional resources can be dedicated to addressing white spots and supporting business models to reach underserved communities. The administration should also leverage synergies between Connect Africa and Power Africa, since energy and digital access go hand in hand, and large projects such as data centers are energy-intensive.

Africans will benefit from these programs, but digital transformation also presents opportunities for U.S. businesses. Consumer spending in Africa is forecast to reach $2.5 trillion by 2030, up from $1.1 trillion in 2015. Africa has consistently been among the fastest-growing regions for Facebook’s user base, and the company's top three fastest-growing markets are all African (Egypt, Nigeria, and South Africa). Netflix is similarly looking to the continent for future growth, with African subscriptions expected to jump from about 3.9 million today to 13 million by 2025. Alphabet and Facebook are both working to install subsea cables to boost internet access across Africa, while SpaceX, Viasat, and Xenesis are among the many U.S. firms exploring satellite solutions to plug the continent’s digital deficit.

The sustainability and success of these investments will depend on improvements in the digital enabling environment. Only twenty-eight of Africa’s fifty-four countries have data privacy laws in place, and only eleven have comprehensive legislation on cyberattacks. The Biden administration could help by deploying technical advisors to U.S. diplomatic missions in Africa to serve as a resource as African governments seek to protect their citizens and assets. The administration should also prioritize digital trade in the U.S.-Kenya trade talks, and make meaningful contributions to the e-commerce protocols of the African Continental Free Trade Area.

Africa is home to vibrant tech eco-systems, with seven hundred active tech hubs from Nairobi to Lagos to Kigali to Cape Town. African startups attracted over a billion dollars in 2020 in venture capital investment despite the coronavirus slowdowns. These young entrepreneurs are building innovative businesses that will transform lives in the region, but it is time to accelerate their progress. With strategic investments in digital infrastructure, the Biden administration has an opportunity to kickstart a historic partnership with Africa, using leadership on digital to “build back better” at home and across Africa.

Aubrey Hruby is senior fellow at the Atlantic Council and co-author of 'The Next Africa' (2015).

Gyude Moore is a senior policy fellow at the Center for Global Development and a former minister of public works in Liberia.