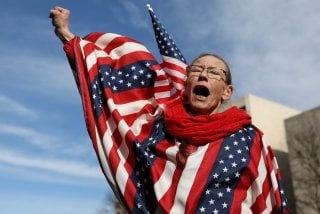 Will the Democrats learn anything from the tectonic shift in the 2020 election? As the dust settles that would increasingly be a big question among some on the Left and Right. So far, we have seen blistering critiques by moderate democratic future leadership. Rep. Abigail Spanberger (D-Va.) was apparently heard in a caucus call to be heavily critical of her leftist colleagues. “Defund police almost cost me my race [because] of an attack ad. Don’t say socialism ever again,” she said, appearing to implicate Rep. Alexandria Ocasio-Cortez (D-N.Y.) and her squad. Will it change anything?

There is a chance for the liberals to have a reckoning . . . but given that power by its nature in entrenched, it is unlikely that a party in the thrall of Antifa rioters, critical race theorists, the woke human-resource managers, even genuinely moderate liberal politicians would be interested or are capable of a course correction. Consider that at the same time when Spanberger was shouting her lungs out, Neera Tanden, a political consultant, was claiming a huge mandate for the democrats to ram through their policy. Decidedly to her Left, Alexandria Ocasio-Cortez was on Twitter to counter the Spanbergerites and claim that the moderates did badly, not because of the policies defunding the police, or rioting and violence on the streets, or critical race theory alienating a lot of minority conservatives, but rather because they ran a shoddy campaign.

On the neoconservative Right, which seems to have latched itself to a Joe Biden presidency, the instinct of vengeance is even stronger. From Evan McMullin to Jennifer Rubins to Pete Buttigieg’s former campaign manager, everyone is apparently making a list of any and everyone associated with the government over the past four years. The idea is to name and shun them and hold them accountable for making “extremist” political choices. One can, however, anticipate where these lists are going to lead. In the meantime, left-wing academics are questioning the entire concept of “legal votes” and preparing the groundwork to compare the next Republican leader to a raging fascist. Even as there’s still relentless upper-middle-class violence on working-class police officers in the streets. In short, nothing has changed, even with a Biden win.

What stares in the face of American liberalism is the final rift that was a long time coming. If anything is clear, it is that the Democrats have lost the working class mantle in the 2020 election. Of course, they have the support of the unions, and a lot of people instinctively vote liberal. But realignments take time. Eventually, in a few years, one might see the Republicans mold themselves to a multiethnic, socially traditional, and working-class party, with an elite leadership that is determined to focus on education, national interest, and civilizational heritage. Social and cultural conservatism is the key to winning over minority voters.

The liberals, meanwhile, are divided and that division goes deep to the core of their ideological contradiction. For a lot of moderates, a Biden win might seem like a return to normalcy. To a lot of cynics, it looks like the last hurrah for a bipartisan class of politicians. The future isn’t bright for moderates on the Left simply because the party is now divided into two parts. On one hand, there is the ascendant radicals. With more battleline moderates losing elections, the party center of gravity will be tilted towards the radicals. It is Ocasio-Cortez, Rep. Ilhan Omar (D-Minn.), and Rep. Pramila Jaypal (D-Wash) who would be the brains trust, the influence over the future generations of activists, not the Spanbergers of the world. That would have a cumulative effect on the policy positions, which would, in turn, result in extreme policy positions like the Green New Deal, or defunding police, or the lesbian, gay, bisexual and transexual overreach that would result in a further cultural backlash.

The second group within the party consists of the neofeudals. They are a new smug sanctimonious bunch with an aristocratic sense of entitlement, partially flabbergasted by this election with a fear of being disenfranchised and losing power. These are the middle-manager types, who look to the more intelligent members of the crowd to get a hint of what to say, and then like all middle-managers, repeat that overzealously, like bureaucrats. They are not inherently malicious, just opportunistic. Woke capital, for example, is neofeudal in nature, so they would change their banner to whoever is in power. Feudal lords worship power. And that includes Google worshipping China, or Facebook and Twitter worshipping the Democrats, etc. The more electoral backlash there is in response to liberal ways, the more the liberals will be in fear of losing power, which is perhaps a reason for mild optimism. All conservatives need to do is to win power and use it. Woke capital will be the first to rid itself of woke middle-managers and hire right-wingers, especially if they realize the boot is about to come down on their throat.

But the bottom line is that neither of those two groups controlling the democratic party’s future will be capable of unifying the vast swathes of working-class and minority votes that have moved to the Right. The former group is ideologically totalitarian, and the latter are middle-managers who would change their tune should the Republicans be poised to control the masses in the future.

The real power will remain in the Republican-controlled Senate during Biden’s lame-duck presidency. It is therefore up to the Republicans to build that coalition and leadership especially from amongst those who moved to the Right, among those who are tired of woke politics. Cultural conservatism, law and order, and the end of foreign wars are winners for Republicans, even in this cursed year. These things have helped them keep control of the senate and reduced the number of Democrats in the House of Representatives. It won them a significant minority vote. It is a combination that neither the Biden administration would provide, nor anyone after Biden would attempt to provide on the Left. In the end, Joe Biden winning the 2020 election might be the pinnacle of success for the liberal moderates.