Withdrawal from Afghanistan is Trump’s Gift to Joe Biden 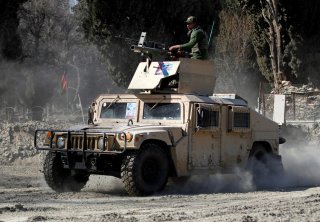 You’d have to be a fool not to listen to Bob Gates. The former head of the CIA, retired defense secretary and tough, outspoken, nose-to-the-grindstone amateur historian, is viewed as a sage observer of all-things-Washington. His judgments are regularly quoted, celebrated, admired and repeated. That’s important just now, as President-elect Joe Biden mounts his transition to the Oval Office, a room he’s regularly frequented, but never inhabited. Is Biden prepared? Bob Gates doesn’t think so: Biden, Gates told us in Duty, his memoir of his years in government service, “has been wrong on nearly every major foreign policy and national security issue over the past four decades.”

The Gates judgment has become a kind of political graffiti: as commonly accepted as the tags that adorn the underpasses of superhighways. When the Gates judgment was first issued, back in 2014, it brought knowing nods from political insiders who had watched Biden through the years, a coterie of Democratic party stalwarts and political hacks who might have agreed with Donald Trump’s description of Biden as “sleepy Joe”—if only Trump hadn’t authored it. There’s only one problem with the Gates description: it’s not true. Not only has Joe Biden not been wrong “on nearly every major foreign policy and national security issue” over the past four decades, on the most important ones he’s been decidedly right.

Take Afghanistan. In January of 2008, Vice President-elect Biden visited Afghanistan to get a feel for the issues the new Obama Administration would be facing there once it took office. The trip did not go well: Biden’s meeting with Afghan President Hamid Karzai was tension-filled, while his talks with senior U.S. military officers left Biden filled with doubts. Every time Biden asked a military officer to explain what the United States was doing in Afghanistan, he got a different answer—from fighting the Taliban to fighting al-Qaeda to helping Afghans rebuild their country. Biden’s exchanges with American soldiers were even more worrisome. What are you doing here? Biden would ask those he met. They didn’t know.

And so it was that, following Obama’s inauguration, Biden emerged as the administration’s leading Afghanistan skeptic: worrying that the military would press for a surge of troops in the country (but without laying out what exactly the surge was for), questioning whether a change in commanders (from Gen. David McKiernan to Stanley McChrystal) was really necessary, then upending the administration’s discussions on the military strategy by suggesting it was wrong to promote a counterinsurgency campaign that focused on the Afghan people. What was needed, Biden said, was a counterterrorism campaign that focused on al-Qaeda. As the last person to talk to the president on any important issue, Biden was both confrontational—and protective. Or, as Bob Woodward would later describe it, Biden “believed the military could not push him around, but they could roll an inexperienced president.”

As it turns out, Biden was right on all three counts. Within a week of his return from Afghanistan, the new president was pummeled by military officers recommending a surge of 30,000 U.S. troops (Biden was stunned), McChrystal’s appointment foundered on a sea of alcohol-fueled embarrassments (complete with personal stabs at the vice president) and Biden’s fear that Afghanistan would become “just another version of Vietnam” proved prescient: at the end of Obama’s first term the war was still being fought, and still going nowhere. The history is painful but instructive: of all of Barack Obama’s senior national security officials, it was Joe Biden who most closely questioned the military’s Afghanistan plan, primarily by pointing out that they didn’t have one.

“The truth is that by the end of the first quarter of 2002—just months after the 9/11 attacks—the military had done what it said it would do,” retired U.S. Army Col. Kevin Benson, the former director of the School of Advanced Military Studies says. “The Taliban were out of Kabul and on the run and al-Qaeda was broken up and largely defanged. That was nineteen years ago.” The problem, Benson argues, was not so much “mission creep” (where the military incrementally escalates a conflict when its initial goals remain unmet), as it is “policy creep”—when policymakers decide to expand a war’s aims once the military has done its job. In Afghanistan, policy creep happened when civilian policymakers decided that defeating the Taliban and breaking up al-Qaeda wasn’t enough. Who was going to assure the rights of women? Who was going to end corruption? Who was going to put a stop to the drug trade?

The shifting policy ground played havoc among U.S. commanders in Afghanistan, who continued to tell Washington that an end to the conflict was in sight—if only. In fact, the war in Afghanistan, as the Washington, D.C.-based Quincy’s Institute’s Adam Weinstein describes it, was always “the Rubik’s cube” of conflicts. The military, Weinstein argues, believed that given just a bit more time and a few more resources “they could make all the squares line up perfectly, and it never quite happened.” That remains true, even now, as the military consistently argues against getting out of a conflict that, given just a bit more time and a few more resources (as they argue), might somehow be ended. The trouble is that it’s not clear that the military itself actually believes that. “It’s like the prisoner’s dilemma,” Weinstein says. “No one wants to be the first one to say, ‘you know, this isn’t working. Let’s get out.’ They’re military officers. It’s not good for your career to say that something can’t be done.”

It’s not as if this hasn’t happened before. In December of 1995, the United States deployed 20,000 soldiers to Bosnia as part of a peacekeeping mission to enforce the Dayton Accords. But what was different then was that Adm. Leighton Smith, the U.S. commander, rejected Washington’s efforts to expand his mission. “We didn’t come here to fight fires,” Smith said. It was a mantra that would later be taken up by the political opponents of the nation-building the United States seemed intent on following in Afghanistan: in Biden’s view, the military would be deployed to kill the enemy and not (as it was said), escort little kids to kindergarten. Smith became the model for a senior military officer who regularly said “no” to policymakers who wanted to do just that. Which is why Smith, though unknown to the American public, is a hero to senior officers who believe that while it’s the military’s job to snap off a salute and follow orders, it’s also their job to scrap their “can do” attitude when they’re directed to do too much.

It’s clear now that while Barack Obama approved a surge of 30,000 troops in Afghanistan, in 2009, he didn’t really think it would work. So too, while the military told the president they agreed with a withdrawal date for U.S. troops of 2011, they believed they could somehow fudge the deadline. “Don’t worry,” Gen. David Petraeus told Republican Senator Lindsey Graham, “we’ll take care of this.” The same holds true now, in the wake of Donald Trump’s November 17 decision to end the U.S. military’s Afghanistan deployments. The announcement was met with condemnation in most of the senior retired military community, a group that includes Marine Gen. John Allen, the current president of the Brookings Institution. “There was no tactical, operational or strategic merit to doing this,” he said, adding that Trump’s decision would put Biden’s administration in “an awkward position.”

But a currently serving senior military officer dismissed Allen’s warning. “One of the things I’ve learned over the years is that no one in uniform is anxious to walk point on policy issues,” a senior serving military officer told me. “That’s especially true in Afghanistan. But privately almost everyone I know has been looking for a way out for a long time. So, you know, they’re quietly cheering.” The same is true, apparently, for those who are reading the tea leaves of the Biden transition team. When Trump first announced his Afghanistan decision, Democrats from Illinois Senator Tammy Duckworth to Rhode Island’s Jack Reed derided the president for his recklessness. “We can’t let U.S. national security and our relationships with steadfast partners become a casualty of President Trump’s wounded ego,” Reed said.

But recently, these officials have become more subdued, lining up behind Washington’s Adam Smith, the savvy Chairman of the House Armed Services Committee. On the same day as the Trump decision, Smith issued a statement saying that after speaking with Christopher Miller, Trump’s new Acting Secretary of Defense, he’d decided that Trump’s Afghanistan move was “the right policy decision.” The statement brought muffled laughter from military officers—who doubted that Smith would base his support for a Trump decision on anything Miller might say. Instead, as they speculated, Smith had endorsed Trump’s decision after reading the signals from Delaware, where the president-elect’s team remained silent on the Afghanistan move. For good reason: for Biden, the Trump decision was a move he might have made more than ten years ago, when he thought it was his duty to keep a young president from being rolled by the guys with the stars on their shoulders.