Law Is On Armenia’s Side in Nagorno-Karabakh 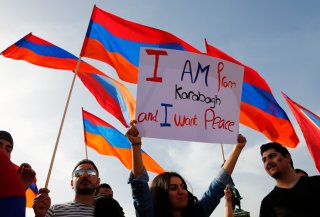 Military skirmishes erupted this week in Armenia and Nagorno-Karabakh as Azerbaijani forces sought to destabilize and seize Armenian-populated territory. Azerbaijan and its cheerleaders in the West say that Azerbaijan is right and note that the United States and other countries recognize Azerbaijan’s administrative authority within the territory of Nagorno-Karabakh. While caviar diplomacy and its beneficiaries increase Baku’s volume, neither history nor international law is on Azerbaijan’s side.

Nagorno-Karabakh’s Armenian roots date back to the first century BC, if not before. Thousands of cultural and religious monuments dot the region. While Seluqs, Mongols, and Persians invaded and briefly occupied Nagorno-Karabakh beginning in the eleventh century AD, none controlled the region for more than a few years, and authority devolved back to local Armenians. A century before Russia’s entry into the Transcaucasus, the Persian shah affirmed the right of local Armenian princes to rule over Karabakh. The 1813 Treaty of Gulistan transferred Karabakh from Persia to Russia.

After the 1917 Russian revolution, Armenia and Azerbaijan emerged as independent states, Azerbaijan for the first time. The first republics of Armenia and Azerbaijan both asserted claims over Nagorno-Karabakh. There were no internationally recognized borders with Nagorno-Karabakh within the Azerbaijani Republic. The U.S. State Department’s historical records from 1920 note Armenia’s de facto independence and that “territorial frontiers” were for later delimitation. Thus, both republics continued to assert jurisdictional claims over Nagorno-Karabakh while the indigenous Armenian population rejected Azerbaijan’s attempts at conquest.

In July 1918, the first Armenian Assembly of Nagorno-Karabakh declared the region to be a self-governing entity. In August 1919, the Karabakh National Council, the region’s government, signed a provisional treaty with the Azerbaijani government to avoid war. The agreement called for Azerbaijan to ensure Armenian cultural autonomy, restrict Azerbaijani garrisons to Shushi and Stepanakert, and allow the Paris Peace Conference to decide Nagorno-Karabakh’s final status. After Azerbaijanis massacred Armenians in Shushi, the Karabakh Congress nullified the treaty and entered a union with Armenia.

The origins of the current Nagorno-Karabakh dispute date to the formation of the Soviet Union. In 1921, Joseph Stalin, who was the People’s Commissar for Nationalities, attached Nagorno-Karabakh as an autonomous oblast to the newly-created Soviet Socialist Republic of Azerbaijan. At the time, the territory was at least 90 percent Armenian. Under the Soviet constitution, autonomous oblasts maintained the right to secede, though this was more theory than reality. Fundamentally, however, Nagorno-Karabakh existed as an oblast within the Soviet Union. It never existed as a part of an independent Azerbaijan

Stalin’s 1936 Constitution sealed this territorial arrangement. This separation became the subject of continual protest from both Nagorno-Karabakh and Armenia in petitions to Moscow to return Karabakh to Armenia.

Soviet Azerbaijan systematically transferred Armenians out of Karabakh and settled Azerbaijanis in their place. Census data shows that between 1921 and 1979 the proportion of Armenians in Nagorno-Karabakh dropped from 90 to 76 percent while that of Azerbaijanis increased from 10 to 23 percent. This influx of new settlers increased the Azerbaijani population fivefold from 7,500 in 1923 to approximately 38,000 in 1979. This orchestrated change in Karabakh’s ethnic-demographic composition exacerbated the conflict between Soviet Azerbaijan and the Armenians of Karabakh.

The matter remained unresolved until 1988 when the Karabakh Movement began. As Soviet leader Mikhail Gorbachev promised both more openness and implemented reforms, citizens across the Soviet Union began airing their long-held grievances. The people of Nagorno-Karabakh were among the most vocal. They sent thousands of letters to the Kremlin demanding to secede from Soviet Azerbaijan. On February 20, 1988, the twentieth convocation of delegates of the Nagorno-Karabakh Autonomous Region adopted a resolution seeking to transfer Karabakh from Soviet Azerbaijan to Armenia.

As the people of Nagorno-Karabakh demanded more rights, Azerbaijan responded with violence. In February 1988, anti-Armenian pogroms erupted in the Azerbaijani city of Sumgait with subsequent massacres and the deportation of more than 100,000 Armenians from Baku. Not long after, Azerbaijan, under the direction of Azerbaijani Communist Party deputy leader Viktor Polianichko, attempted to resolve the “Karabakh problem” by ridding it of Armenians altogether. Polianichko led “Operation Ring” to uproot Armenians from Nagorno-Karabakh.

The Republic of Nagorno-Karabakh, renamed Artsakh in 2017 after an ancient Armenian province, has its own government, educational system, and defense forces. Freedom House rates its government as more democratic than Azerbaijan’s.

The evolution of international law puts Artsakh’s independence on solid legal ground. The legal and historical parallels between the cases of Kosovo and Artsakh are striking. Kosovo had a long history of autonomy but, beginning in the late nineteenth century, endured successive attempts by Serbia to conquer its territory and expel its indigenous population. In 1912, Serbia forcibly incorporated Kosovo into the Kingdom of Serbia which six years later joined the new Kingdom of Yugoslavia. Like the Soviet Union, communist Yugoslavia kept a tight lid on ethnic expression but when it collapsed, Serbian nationalists resumed their pogroms.

On March 24, 1999, the United States and NATO launched a bombing campaign against Serbian forces to protect the people of Kosovo. During his address to the nation, President Bill Clinton justified military action to protect Kosovars from Serbian aggression. The United Nations (UN) Security Council subsequently passed Resolution 1244, which authorized the UN administration of Kosovo and established a framework for resolving its political and legal status. In 2008, the United States, United Kingdom, France, Turkey, and much of Europe formally recognized Kosovo as an independent state. These countries based their recognition of Kosovar independence upon its capacity for statehood and the futility of negotiating with a country unwilling to compromise or guarantee basic human rights and cultural expression.

While U.S. secretary of state Condoleezza Rice said that the recognition of Kosovo was a unique case that did not set a precedent, this was largely meant to assuage Russia. Even if Kosovo’s independence is sui generis, the factors supporting Artsakh’s independence meet and exceed the legal rationale used by the United States and Europe to recognize Kosovo.

Ethnic Cleansing Should Not Triumph

Azerbaijan’s attempts at ethnic cleansing in Nagorno-Karabakh mirror Serbia’s. For decades, the Azerbaijani government has targeted heritage in lands under their control in order to erase evidence of Armenian presence. For instance, since 1998 the Azerbaijani government has destroyed thousands of khachkars, Armenian cross-stones, in Nakhichevan, an autonomous republic of Azerbaijan that, like Nagorno-Karabakh, historically maintained an Armenian majority. Satellite imagery and videos have documented a purge of 2000 khachkars, some more than a millennium old, between 2003 and 2005 alone.

Minimizing Armenian architectural influence and evidence, the Azerbaijani government also promotes the false narrative that Caucasian Albanians, not Armenians, built Christian sites in Nagorno-Karabakh. On February 3, 2022, Azerbaijan’s Minister of Culture stated that the government had established a working group to “eliminate the so-called traces written by Armenians on Albanian religious temples.” In March 2021, Azerbaijani president Ilham Aliyev visited Hadrut, an ancient town in southern Nagorno-Karabakh taken by Azerbaijani forces. There, he stated that the “Armenians wanted to Armenianize” the twelfth-century St. Astvatsatsin Armenian Church. He declared that Armenians had “written inscriptions in Armenian here, but they failed,” and declared “[i]t is our ancient historical site, a temple of our Udi brothers … But we will restore. All these inscriptions are fake … They will see this ancient Albanian church renovated after a while. Temples belonging to all religions in Azerbaijan are protected by the state, built by the state, and the whole world knows that.” No historians outside the pay of the Azerbaijani state support Aliyev’s theories or agree with his accusations. He is revising history out of whole cloth and destroying irreplaceable cultural heritage.

In other cases, the Azerbaijani government has chosen to destroy or remove structures including the destruction of a church in Shushi, the cultural center of Nagorno-Karabakh. The European Parliament has acknowledged the erasure of the Armenian cultural heritage is “part of a wider pattern of a systematic, state-level policy of Armenophobia, historical revisionism and hatred towards Armenians promoted by the Azerbaijani authorities.”