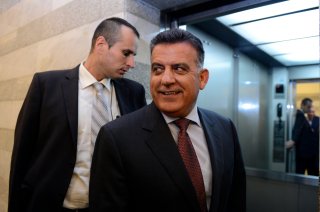 Lebanon’s top internal security chief, Abbas Ibrahim, visited Washington, DC this past week to meet with senior officials in the Biden administration and discuss the release of American hostages in Iraq and Syria. Although six Americans are missing and believed to be held in the Middle East, the Biden administration has recently focused its efforts on Austin Tice, a freelance journalist and veteran U.S. Marine Corps officer, who was abducted near the Syrian capital of Damascus while traveling in 2012 to cover the country’s civil war.

According to U.S. intelligence services, it is widely believed that Tice is alive and being held against his will by the Syrian government. The Syrians deny having him in their custody.

Now Washington wants to use its relationship with Lebanon’s Ibrahim to help in the ongoing investigation into Tice’s condition.

Ibrahim, officially a major general, is seen as a man who has strong connections with all internal and foreign regional actors, making him a valuable figure in mediating disputes between political rivals. His reputation as a skilled negotiator made him America’s go-to man in releasing Western hostages from captivity in adversarial countries, though he has received criticism for being too close to Hezbollah (a U.S. designated terrorist organization). Indeed, Ibrahim forged a relationship with the Shia, Iran-backed organization when he was an army intelligence chief in south Lebanon. It is precisely that trust that his supporters say makes him an ideal mediator with a track record of successful outreach.

In 2019, the sixty-three-year-old security chief was decisive in freeing Canadian and U.S. tourists Kristian Lee Baxter and Sam Goodwin from their imprisonment in war-torn Syria. In a touching moment, Baxter and Canada’s then-ambassador to Lebanon thanked Ibrahim for his role in mediating with Syrian authorities to secure his release.

That same year, the top Lebanese spymaster helped secure the freedom of U.S.-based Lebanese businessman Nizar Zakka from the Islamic Republic of Iran in 2015 on the charges of spying for the United States. In a previous visit to Washington, where had also met Austin Tice’s parents, Ibrahim had received the James W. Foley International Hostage Freedom for his role in freeing Zakka, Baxter, and Goodwin. Now, he is being asked by the White House and Tice’s parents to apply his skills in negotiating Austin’s release.

During his trip to Washington, Ibrahim also spoke briefly with members of the Lebanese American community, including leaders of the American Lebanese Foundation. They discussed ways in which the Lebanese diaspora in the United States can help improve Lebanon’s deteriorating economic situation. He also commented on Lebanon’s social ills, expressing his fear that it could lead to an implosion in the society due to the economic collapse brought on by the banking meltdown in 2019.

“We are worried about social instability in Lebanon more than political one, the people have the right to respond to the currency collapse, but we don’t want it to turn into chaos,” he said.

His warning comes at a time when 80 percent of Lebanese are living under the poverty line, with 36 percent in extreme poverty.

Now with the election results finalized, and with Hezbollah’s political rivals gaining a slight upper hand in the parliament, there may be an opening for dialogue between Lebanon and the United States on economic assistance. Still, at the present time, a top foreign policy objective in the Biden White House is bringing all American hostages in the Middle East home safely, and Washington decisionmakers have frequently broken official taboos to see it through.

For example, during the previous Trump administration, two American diplomats, including Roger Carstens (who is the third special envoy for hostage affairs since the Obama administration created the position in 205), visited Damascus to meet with Syrian government officials in an attempt to discover the whereabouts of American hostages, including Austin Tice. The meeting ended in no breakthroughs: the Syrians were fairly uncooperative but delivered a list of demands that would require significant shifts in U.S. policy towards Syria and its president, Bashar al-Assad, including the withdrawal of American troops from Raqqa. However, now with a new U.S. administration in office, negotiations have resumed with Damascus.

Earlier this month, President Joe Biden met with Tice’s parents and reiterated his own commitment to securing Austin’s “long overdue return to his family.” Ibrahim told the National that there now exists a window of opportunity for Tice’s release, despite that he still could not verify Austin’s health or the conditions of his detention. Ibrahim stated that he will be visiting Syria soon to obtain all the relevant facts. The next few months will be critical, and the Biden administration is hoping to score a political victory with Tice’s release. If Ibrahim’s U.S.-backed effort succeeds, it will further reaffirm his good standing as a trustworthy negotiator.

Adnan Nasser is an independent Middle East analyst with a BA in International Relations from Florida International University. Follow him on Instagram @revolutionarylebanon.