Lebanon Can Be Saved, But America Must Act Now 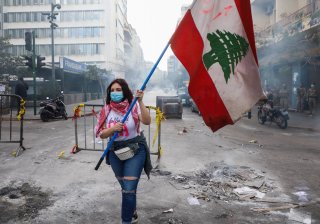 The imminent collapse of Lebanon is certain to give Iran, Turkey, Russia, and China the perfect foothold to project power against Europe’s soft underbelly and Israel’s northern border, but the United States and its allies currently seem too preoccupied to care. Beleaguered friends inside this resource-rich enclave on the Mediterranean Sea are begging for help, but the response from Western powers has been tepid at best.

The collapse of a multiethnic and multireligious democracy—what St. John Paul II called a message of pluralism and coexistence—will eradicate that message in the place where it is needed most. It will hand the region over to malevolent forces and send a message to the world that America is an unreliable ally that balks when the going gets tough.

President Joe Biden can prevent a foreign takeover in Lebanon, but only if he acts quickly. Given the high stakes, he and his team should do exactly what our friends are asking them to do: lead the way for an international summit that will push for Lebanon’s political reform, recognize its formal neutrality, and open peace talks with its neighbors.

A Crisis at Fever Pitch

Once upon a time, Lebanon’s robust economy and picturesque landscapes gave it a reputation as the “Switzerland of the East,” but these days rampant corruption and foreign occupation have pushed the country over the edge. Aided by a bevy of crooked oligarchs, Iran and its proxy Hezbollah maintain their stranglehold on the country under the pretext of resisting the Jewish state. Hezbollah’s chief Hassan Nasrallah recently announced that his stockpile of precision-guided missiles has doubled in just one year, inviting war with Israel even as Lebanese families struggle to make ends meet. That Nasrallah and his cronies hide their missiles in civilian areas only proves his disregard for their well-being.

Lebanon was already sliding toward the abyss before the August 4, 2020, blast in Beirut’s port, with protestors filling the streets in the midst of a global pandemic to denounce the government’s financial mismanagement, but the shocking explosion pushed the country into freefall. Sensing a political vacuum, Turkey moved to expand its influence at the expense of Iran, while Russia and China also began prowling for new opportunities, fueling Hezbollah’s black market and aggravating the economic crisis with no resistance from Lebanon’s puppet government. Left unopposed, the clash of outside interests will pull this tiny country into the same kind of war as the one taking place over the border in Syria.

Lebanon isn’t perfect, but it isn’t hopeless either. It is true that sectarian conflict and foreign intervention plunged the country into civil strife during the 1970s and 80s, and that the war’s long shadow still darkens the face of Lebanese society; but Lebanese Christians and Muslims should be commended for building the freest and most pluralistic Arab state in the region. The raw materials for a flourishing, multi-religious society that combines the best of East and West are still present. What is lacking is an architect with fresh eyes and a clear plan.

The Beginnings of a Plan?

One such architect may be the patriarch of the Syriac Maronite Church of Antioch, Cardinal Boutros al-Rai, who represents the largest Christian population in the country. Patriarch Rai recently called for a new policy of “active neutrality” to insulate Lebanon from regional instability and external meddling. Such a policy would, if implemented, protect Lebanon from the shockwaves of two massive regional conflicts: one between Saudi Arabia and Iran along Sunni and Shia Lines, and the other between Saudi Arabia and Turkey for leadership of the Sunni world. The Patriarch has since extended this advocacy by calling for the internationalization of Lebanon by the United Nations.

Critical to any policy of active neutrality is the resolution of Lebanon’s maritime border dispute with Israel, which would permit greater access to natural gas deposits offshore and set an important milestone for comprehensive peace with its Jewish neighbor. Also critical to Lebanon’s neutrality is the restoration of Lebanon’s territorial and economic sovereignty and the sealing of its borders to block smuggling routes and illegal immigration. The UN’s longstanding mission to monitor the Lebanese-Israeli border through UN Interim Force in Lebanon (UNIFIL) should be expanded to the Syrian border, which will have the added benefit of cutting off an additional source of revenue for Hezbollah and Syria’s Assad regime.

Specific attention needs to be given to Lebanon’s swelling demographic crisis. Lebanon can no longer serve as an indefinite home for people impacted by the Israeli-Palestinian conflict or the Syrian Civil War. Over half of the people in Lebanon now are not Lebanese, adding tremendous strain on civil infrastructure, particularly after the destruction of 300,000 homes by the Beirut explosion. The situation is untenable from a security perspective, as refugees and displaced persons are vulnerable to manipulation by external actors with nefarious motives. Reports indicate that Turkey is smuggling weapons and ideology into Lebanon through radicalized members of the Palestinian and Syrian Sunni communities, further destabilizing an already-precarious situation.

Patriarch Rai has been vocal about fixing Lebanon’s internal problems, too, calling on politicians to set aside their egos and partisan agendas to form a government that will restore basic services and fix the economy. He has called for an end to armed militias inside the country, whether Hezbollah or otherwise, and for restoring the Lebanese Armed Forces (LAF) as the country’s sole legitimate security force. America’s steadfast support for the LAF has garnered the Patriarch’s praise by bolstering the one government institution still respected by all segments of Lebanese society.

While some voices in the United States have called for slashing support to the LAF, such a policy would actually further Hezbollah’s plan for the country. Any kinetic attempt by the still-weak LAF to disarm Hezbollah would fail as of now, spurring a civil war that would pose a threat to neighboring Israel. But a stronger LAF, loudly backed by the United States and its allies, together with the other elements of the Patriarch’s plan, would undermine Hezbollah’s narrative and increase stability for Lebanon and Israel at the same time.

A Role for the United States

At the conclusion of the 116th Congress, the U.S. Senate passed a resolution recognizing the devastating explosion in Beirut’s port and expressing solidarity with the Lebanese people. This was a promising first step in crafting a policy response to the humanitarian crisis in Lebanon. The 117th Congress must now take the baton and formulate a more comprehensive strategy. While the situation is bleak and the challenges too numerous to count, the path forward for U.S. engagement is fairly straightforward.

First, the Biden administration and Congress must increase its humanitarian aid funding and send it directly to the Lebanese people with a special focus on food security, education, and healthcare. While the United States remains Lebanon’s most generous supporter, it should expand its list of local partners, including faith-based institutions, to deliver this assistance, making sure to avoid government channels which are plagued by corruption.

Second, Biden should address Lebanon’s security crisis by increasing support for the LAF to counter Turkey’s and Iran’s local proxies. If Biden wants to restart negotiations under the Joint Comprehensive Plan of Action to address Iran’s nuclear program, he must premise those negotiations on Iran giving up its support for Hezbollah and other terror groups across the region. Any regime that weaponizes religion to destabilize and destroy cannot be trusted to deal honestly at the negotiating table.

Third, Biden can partner with France and the UN to host an international summit that will pressure Lebanese lawmakers to form a government, restructure the country’s political system, redefine Lebanon’s role in the Middle East as a neutral bastion of freedom and pluralism at peace with its neighbors, and end its status as an indefinite home for those displaced by conflicts in the region.

There is still hope for Lebanon, but time is running out. Failure to act will create a new forward base for malign powers looking to project the chaos of the Middle East into the Mediterranean, Israel, and Europe.

A little leadership can go a long way.

Robert Nicholson is president of the Philos Project, a nonprofit based in New York City that promotes positive Christian Engagement in the Near East.

Toufic Baaklini is president of In Defense of Christians, a nonprofit, nonpartisan organization advocating for the human rights of Christians in Africa and the Middle East.