Lessons from the Beirut Blast: Lebanon Will Continue to Collapse 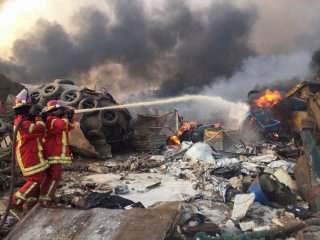 Following the one-year anniversary of the explosion at the Port of Beirut on August 4, 2020, Lebanon’s ruling elite have driven the country into the ground. Contrary to what many hoped, the explosion in Beirut did not produce the reforms necessary to save the country and instead highlighted Lebanon’s political culture of corruption, alongside the economic and political nightmare currently ripping the country apart. Still, there is an opportunity to learn from the lessons of the disaster and institute positive change in Lebanon, should world leaders increase their engagement and Lebanese continue to demand change in the coming months.

Unfortunately, world leaders missed an opportunity to support the Lebanese people and the societal unity that followed the Beirut blast. The impact of the blast is widely known, was certainly avoidable, and produced massive social upheaval and calls for revolution. The incident left a serious mark on Lebanon that would not be easily washed away. Yet, while Lebanese rallied around lost loved ones, homes, and their beloved city, their leaders and the world largely looked on with indifference.

Lebanese across the country beckoned for reform and revolution as the details emerged—including the fact that 2,750 tons of ammonium nitrate had been stored in a warehouse at the port for years. Lebanon’s leaders responded by blaming everyone but themselves while clinging to power—sacrificing Prime Minister Hassan Diab’s government while citing immunity. The resulting investigations have been hobbled as it has been impossible to question anyone with political power.

Instead, Lebanon’s elites chose to rename Saad Hariri as prime minister in October 2020 under the promise of reforms—a sickening joke to many Lebanese who had forced his resignation one year earlier. Hariri, who epitomizes the political elite, went on to battle with President Michel Aoun and Lebanon’s main political parties over the makeup of the cabinet for nearly ten months before resigning after failing to reach a deal. In his place, billionaire Najib Mikati was chosen to fill the role facing the same challenges—a symbol that not much has changed. As usual, the struggle for power as a means of survival outweighed the country and people.

Meanwhile, the Lebanese economy continued its slow implosion. As the World Bank recently reported, every major economic metric indicates disaster. The Lebanese lira’s black-market value sits at 1USD/18,325LBP. The unemployment rate is 40 percent. Half the population lives under the poverty line. Nearly 77 percent of households, as well as 99 percent of Syrian refugee families, cannot afford food. The import-heavy country has witnessed a 45 percent decrease in imports—partially a result of the Port of Beirut’s destruction.

This has produced follow-on crises. The government recently shut down two major power plants on July 9 due to a lack of hard currency, causing sweeping cuts to energy services and worsening already daily blackouts. Additionally, most water pumping will cease in the coming weeks, leaving over four million people without safe water. Ultimately, the government has ceased to provide basic services, leaving ordinary citizens in the dark.

In response, Lebanese of all sects—particularly youth—have taken to the streets to protest ineffective governance, unemployment, and corruption, calling for a revolution and rejecting outdated power structures. Protests have even targeted Hassan Nasrallah, the Hezbollah leader once considered a beacon of resistance and opposition but now rightly equated with the political establishment. Unfortunately, such protests have been met with violence—from both the state and Hezbollah—in major cities like Tripoli and Beirut. Even a recent memorial-turned-protest, led by families who lost loved ones in the August 2020 blast, was met with batons and tear gas—a striking but unsurprising response against grieving families and their calls for truth, justice, and accountability. A similar outcome occurred on the one-year anniversary as water cannons and tear gas were deployed against protestors.

This recent incident perfectly encapsulates the sweeping crisis facing Lebanon today. The government is largely disinterested in accountability because sclerotic political groups understand reform would hobble their cronyism and power. Yet, realistically, this is the source of Lebanon’s terrible governance and the resulting economic nightmare that is fueling social unrest and destroying the country.

International and regional actors have contributed to the problem while failing to properly engage the issue. The United States appears to lack a clear Lebanon policy. Further, the Gulf has largely stepped away from the country in recent years while Iran continues to back Hezbollah. France appears most interested in stabilizing the country today, although its efforts have been limited to donor conferences and rhetorical calls for reform that have largely been ignored. That said, some efforts are underway to sanction corrupt politicians inside Lebanon and freeze elicit funds in Switzerland and the European Union. Still, this is not enough. The bottom can and will fall out, with devastating consequences.

To be sure, this is not inevitable. By providing aid to Lebanese communities in the form of services like medical care, sanitation, and food, the international community can assist the bulk of the country while undermining the deep sectarian patronage networks underpinning Lebanon’s political groups. World leaders should work with the United Nations and humanitarian sector, alongside local civil society organizations conducting mutual aid operations, to immediately streamline such services, but should avoid direct cash assistance that would ultimately end up bolstering the patronage networks. The goal here is simple: support the people, not the system.

In parallel, influential states in the region, as well as internationally, need to use diplomatic tools to pressure Lebanon’s leaders. These efforts need to focus on financial sector reform, government transparency and anti-corruption initiatives, and the rampant patronage system preventing hundreds of thousands of Lebanese youths from obtaining decent jobs. This will be difficult, especially as world leaders have unsuccessfully incentivized similar reform initiatives in the past. Further, care must be taken to avoid sanctions regimes that harm average citizens and advantage Hezbollah and Iran—just as similar efforts unintentionally empowered the Houthis by harming other actors in Yemen.

While imperfect, this approach can prevent catastrophe in Lebanon. True reform can only be achieved by disconnecting Lebanese from the patronage networks they are forced to rely on to survive. This diminishes the power of the dominant political groups from the bottom and can bolster the street, calls for reform, and support those in need. Until such efforts are focused, and the lessons of the Beirut blast realized, Lebanon will continue to collapse.