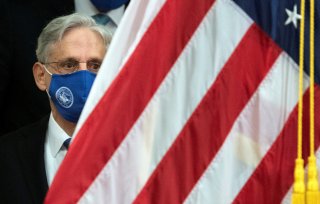 The Senate voted to confirm Merrick Garland as the United States’ eighty-sixth attorney general on Wednesday. He was formally sworn in as the chief law officer on Thursday.

Most of the news and opinion coverage surrounding President Joseph Biden’s initial nomination of Garland centered around whether he could restore the public’s faith in the Department of Justice. Understandably so. From accusations of the Trump administration’s DOJ unduly intervening in the criminal and antitrust cases of the president’s allies to one of the Obama administration’s attorney generals categorizing himself as a wing-man of the president, politicization of the Justice Department has seemingly grown too commonplace in recent years. Will Garland manage to convince the public that integrity, accountability, and law and order are still the driving forces behind the DOJ’s operations?

Without question, the respected federal judge and former prosecutor has the experience and qualifications needed to achieve this goal. He has built a strong reputation as a centrist with a commitment to fairness and equity. That is why he received the bipartisan support of the Senate Judiciary Committee and ultimately received a roll call vote on the Senate Floor a week early. That said, there is still reason to be concerned that Garland may continue prioritizing politics over the rule of law at the DOJ.

At his two-day confirmation hearing, Garland would not commit to ensuring any possible Biden administration links to “big tech” will not influence his DOJ’s decisionmaking.

A diverse coalition of Democratic and Republican legislators have noted that they are worried about Biden’s appointment of technology executives to key White House positions. Perhaps these concerns have merit; perhaps they do not. Regardless, given the current public sensitivity to politicization at the DOJ, it is not ideal that the aspiring head of this department could not provide a direct answer to the simple question of whether he would let potential White House conflicts of interest impact ongoing DOJ proceedings.

If justice is needed against today’s tech giants, then it appears it will come in due time regardless of the actions of a Garland DOJ. In Google v. Oracle, the Supreme Court is already examining allegations that Google stole competitors’ intellectual property to create Android—solidifying its mobile monopoly through anti-competitive means. Likewise, a majority of state attorneys general have already filed lawsuits accusing Google of engaging in monopolistic behavior, including forcing phone developers to pre-install Google’s apps as a condition for using Android. However, while state attorneys general and the Supreme Court may possess the capability of enforcing law and order, only the next attorney general can restore public faith in the Department of Justice as an institution. That process should start with Garland pledging to keep the DOJ independent of the executive branch.

During his confirmation hearing, Garland declined to commit to refrain from interfering in the Durham investigation—the probe being run by DOJ special counsel John Durham into possible illicit spying on the Trump campaign during the Federal Bureau of Investigation’s Russian collusion investigation.

Former president Donald Trump’s attorney general, William Barr, indicated in his confirmation hearing that he would allow Robert Mueller, the special counsel who examined allegations of collusion between the Trump campaign and Russia, to complete his investigation. He continually heaped praise on Mueller, going so far as to say he would not “be bullied into doing anything I think is wrong.” If only Garland was willing to make the same commitment with Durham at his confirmation hearing.

Should Garland interfere in the Durham investigation, then the Biden DOJ could quickly become perceived as being more politicized than that of the Obama and Trump administrations. That is not what the public wants or deserves. Lisa Monaco, Biden’s nominee for deputy attorney general, seems to understand as much. That is why, at her confirmation hearing, she committed to ensuring Durham has all the resources he needs to complete his probe. One can only hope that Garland ultimately comes to the same conclusion if he has not already.

While Garland’s lack of clear answers at his committee hearing has understandably raised some eyebrows, it is still important that everyone look at the new attorney general with some perspective. At the end of the day, he still boasts a strong track record as a centrist with bipartisan support and an impressive record of accomplishments. Time will tell if the pressure and expectations of his new job will impact his impartiality and future behavior, but the stability and credibility of the DOJ are depending on him staying the course.