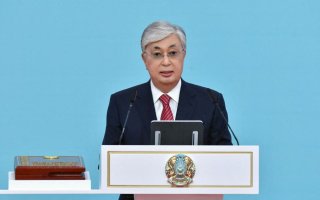 The re-election of Kazakh president Kassym-Jomart Tokayev on November 20 underscored that the Central Asian country will continue to pursue an independent foreign policy. The election did not meet all Western democratic standards but the policies pursued by Astana accurately reflect the public’s desire to avoid political and economic subordination to Russia and China.

While Moscow and Beijing seek to establish a “multipolar” global order in which smaller states orbit around the larger powers and fall into their gravitational pull, Kazakhstan is pursuing a multi-vector foreign policy to prevent its absorption into another state’s sphere of influence. Formulated by Kazakhstan’s founding President Nursultan Nazarbayev after the country gained independence in 1991, Astana’s multi-vector foreign policy is a strategy molded by its geopolitical location. Kazakhstan and the other four Central Asian states are geographically isolated and hemmed in by Russia, China, Afghanistan, and Iran, all of which have competing interests and influence in the region.

The collapse of the Soviet Union created considerable economic dislocation, left several states with nuclear arsenals, led to environmental degradation, and, unlike the experience of Europe’s post-communist states, left behind the toxic legacies of Soviet rule without a wider regional support structure. Kazakhstan’s borders were drawn up by Stalin while substantial regions of the country, especially in the north, were populated by Russian-speaking settlers who were often more loyal to Moscow than to the newborn state. Their presence provides an excuse for the Kremlin to interfere with Kazakhstan’s sovereignty.

Stalin’s forced sedentarization in the 1930s, concurrent with the Holodomor state-engineered famine in Ukraine, killed almost a quarter of the Kazakh population of 6 million and created significant demographic problems that were felt for decades. Two of the largest ecological disaster zones on the planet, the dying Aral Sea and the Semipalatinsk nuclear testing site, became Kazakhstan’s responsibility. Astana also inherited the world’s fourth-largest nuclear arsenal which it could neither afford nor maintain, thus necessitating expensive disarmament.

Kazakhstan needed to manage outside pressures and internal demographic, social, and economic challenges to maintain its newfound sovereignty and develop its economy. The foreign policy strategy implemented by Nazarbayev enabled the country to develop peacefully through several practical objectives. The first was to attract investments without creating new dependencies. Astana was able to secure important investment deals with the West which spurred massive economic growth through the hydrocarbon industry.

This policy has been continued by the current government in its efforts to attract Western businesses fleeing Russia due to the economic sanctions imposed on Moscow. Astana no longer consults Moscow on financial and currency matters, and it is downgrading its involvement in multinational formats dominated by Russia, including the Commonwealth of Independent States (CIS) and the Eurasian Economic Union (EEU). Nazarbayev also welcomed Chinese investment in certain economic sectors, particularly the chemical, hydrocarbon, mining, and metallurgy industries, to balance Russian influence.

A cordial business environment was created to ensure that the economic interests and profits of foreign actors did not undermine Kazakhstan’s sovereignty. Nazarbayev welcomed China’s Belt and Road Initiative (BRI) to support further infrastructure development and facilitate the land bridge between China and Europe although Astana continues to closely monitor its security ramifications.

The second key component was to link Kazakhstan’s development imperatives with its multi-vector foreign policy. After dismantling its nuclear arsenal and cleaning up the Semipalatinsk nuclear site, Kazakhstan became a leading proponent of international nuclear disarmament and nonproliferation. Astana also became an outspoken champion of sustainable low-carbon development given Kazakhstan’s direct experiences with the destruction of the Aral Sea.

Kazakhstan has also played a positive regional and global role as a secular state with a Muslim-majority population. In September, Astana hosted the 7th Congress of Leaders of World and Traditional Religions, a forum established two years after the 9/11 terrorist attacks to foster inter-religious dialogue and minimize the appeal of religious extremism. The Congress was attended by Pope Francis and leaders of all major denominations. Astana has also promoted various regional initiatives to better protect Central Asia’s independence. At their July summit, leaders of the five Central Asian countries set an agenda for regional cooperation to promote interconnectivity through free trade, climate and green energy cooperation, tourism, water sharing, and hydropower investments. It also opened the door for deeper Western engagement.

The recent presidential elections will consolidate Kazakhstan’s position as a major diplomatic broker in Eurasia, steering between two assertive neighbors and avoiding being drawn into any regional conflicts. This policy, launched thirty years ago, provides an opening for greater Western diplomatic and economic involvement that will help maintain the country’s sovereignty at a time of growing turmoil in Russia and tense relations between the West and China.

Janusz Bugajski is a Senior Fellow at the Jamestown Foundation in Washington DC. His new book, Failed State: A Guide to Russia’s Rupture, has just been published.