How Kazakhstan's Economy Is Navigating the Russo-Ukrainian War 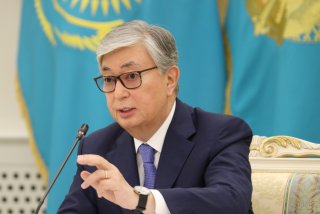 The Astana Finance Days conference in Nur-Sultan, Kazakhstan from June 27 to 29 took place amidst deep economic woes in Central Asia caused by Russia’s invasion of Ukraine. This is one of the largest financial conferences in the region, hosted annually by the Astana International Financial Center (AIFC) since 2018. Taking place just as the European Bank of Reconstruction and Development (EBRD) announced a new strategy for Kazakhstan in an atmosphere dominated by war and sanctions, it is obvious that this year will be very different.

Moscow’s aggression against Ukraine and subsequent Western sanctions are having significant repercussions in Kazakhstan, a member of the Eurasian Economic Union (EEU) with a long border and extensive trade and economic relations with Russia. The Kazakh currency (tenge) has lost value due to the volatility of the Russian ruble, while Russian banks under international sanctions continue to operate in the country. Kazakhstan has also been burdened by the measures taken to comply with Western embargos on Russia to avoid being subject to secondary sanctions.

The war has also highlighted tensions between Kazakhstan and Russia. Earlier this month, Kazakhstan’s president Kassym-Jomart Tokayev told Russian president Vladimir Putin during a public panel at the St. Petersburg International Economic Forum that his country will not recognize the “quasi-states” of the Donetsk and Luhansk “peoples’ republics” in eastern Ukraine. Consequently, Russia suspended oil transit from Kazakhstan through its Black Sea port of Novorossiysk for the second time since the war started and, in response, Kazakhstan reportedly blocked 1,700 wagons of coal exports from Russia, most of which were heading to China.

Oil and gas account for 35 percent of Kazakhstan's gross domestic product (GDP) and 75 percent of its exports. In addition, the country’s hydrocarbon industries have benefited from most of the $150 billion in foreign direct investment (FDI) since Kazakhstan gained independence in 1991. Kazakhstan is the second-largest recipient of FDI in the region, behind Russia. This appears likely to change as Western sanctions have already forced over 1,000 companies to exit the Russian market. At the Astana conference, the Kazakh government is eager to offer many of the businesses leaving Russia registration, accommodation, and an opportunity to trade on the Astana Stock Market.

Kazakhstan has also expressed readiness to create institutional conditions for direct cooperation with foreign companies spooked by Russia’s business environment either through facilitating relocation to Kazakhstan or the opening of joint ventures. Speaking at the June 27 meeting of the AIFC Management Council, President Tokayev alluded to the implications of the sanctions and stressed that the conditions for registering foreign companies at the AIFC should be as simple and liberal as possible.

There are several critical reforms Kazakhstan must implement to minimize the risks brought about by the war: secure alternative routes for its oil exports, invest in reducing greenhouse emissions in the energy sector, diversify the energy sector by developing renewable energy sources and nuclear power plants, and stabilize the financial market. Financial stabilization includes local and foreign companies buying Russian assets in Kazakhstan. The EBRD has already offered to boost the local capital of Russia’s Sberbank if it becomes a Kazakh asset.

The AIFC will be critical for the realization of these programs, which appeared ambitious and idealistic before the war but are now vital, practical, and achievable. Kazakhstan has already approved a new investment plan to attract high-quality foreign and domestic investments, raising economic activity, increasing the income of citizens, and creating new jobs. The plan aims to increase fixed capital investment to 25.1 percent of GDP by 2026 and boost foreign direct investment to $25.5 billion.

In the current conditions of global uncertainty, however, competition for investments and resources is intensifying. Tokayev pointed out that “investors are looking for venues where corporate governance principles are highly respected, the rule of law prevails, and there is international jurisdiction.” The president has supported an agenda of robust economic, political, and social reform since the January 2022 events in Kazakhstan.

Unsurprisingly, the topic of the Astana Finance Days conference this year is “sustainability, social responsibility, and growth” to underscore governmental priorities. They are focused on accelerating the growth of a competitive market economy, social reforms, investments in education and health care, and digitalization. All of these will be key to maintaining internal stability in a turbulent region during a major international crisis.

The statistics so far are encouraging. Despite global challenges, Kazakhstan’s economy expanded by 4.6 percent between January and May this year. Investments in fixed assets rose by 2.5 percent, with the biggest increase in education (71.1 percent), social security (55.1 percent), science and technology (35.9 percent), and health (27.8 percent).

Kazakhstan is striving to extricate itself from the shadow of Russia’s war on Ukraine and ensure financial and economic stability. The AIFC is in a unique position to connect Kazakhstan with global financial institutions and attract long-term investors. Participation by U.S. and EU financial centers and corporations will contribute to strengthening Kazakhstan’s economic position and national independence in a region stuck between a revanchist Russia and an assertive China.

Margarita Assenova is a Senior Fellow at The Jamestown Foundation.