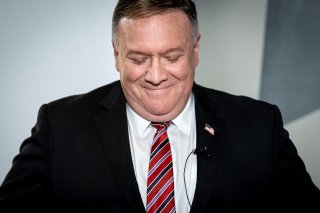 Secretary of State Mike Pompeo delivered a speech on the Trump administration’s China policy at the Richard Nixon Presidential Library on July 23. It was the culmination of a series of speeches on the subject over the past several weeks by National Security Advisor Robert O’Brien, FBI Director Christopher Wray, and Attorney General William Barr. Pompeo confirmed he had orchestrated the speeches and explained that their purpose was “to make clear the threats to Americans that President Trump’s China policy aims to address, and our strategy for securing our freedoms.”

In many respects, Pompeo’s speech—like its predecessors—correctly identified many of the profound strategic challenges that China poses to the United States. Beijing has become increasingly competitive and assertive in its international pursuit of power, wealth, and strategic influence. In that pursuit, it has engaged in economic and military coercion, vituperative diplomacy, unfair trade practices, disregard of many elements of international law, and cyber theft and other forms of espionage aimed at acquiring trade and technology secrets. Moreover, China has used extensive propaganda and influence operations—both overt and covert—to advance Beijing’s global agenda. In these efforts, Beijing has attempted to exploit opportunities afforded it by the openness of the U.S. system—all while tightening authoritarian controls over China’s own system, and continuing its assault on the human rights of the Chinese population.

But Pompeo framed the challenge from China, and the requisite American response, in some terms that are both tenuous and historically inaccurate. He started, somewhat awkwardly, given that he was speaking at the Nixon Library, by mischaracterizing Nixon’s approach to China and mildly chastising the former president for that approach. To be fair, Pompeo said Nixon “did what he believed was best for the American people at the time” and “deserves credit for realizing that China was too important to be ignored.” But Pompeo repeated the Trump’s administration’s mantra that “the engagement strategy”—which he credits Nixon for launching—has been a total failure because it “presumed that as China became more prosperous, it would become freer at home, and friendlier abroad” and “has not brought the kind of change in China that President Nixon hoped to induce.”

To make this point, Pompeo invoked Nixon’s famous 1967 article in the journal Foreign Affairs (“Asia After Vietnam”), in which he asserted:

Like others before him, Pompeo fundamentally misinterprets this passage as aimed primarily at changing China internally. Other than aspiring to turn Beijing’s attention inward, that was not Nixon’s focus; indeed, in the 1967 article he expressed no preference for what the Chinese actually did internally. On the contrary, he made explicit that he was talking about changing China’s external behavior when—in the next paragraph—he compared it to the Soviet Union and observed that “Moscow finally changed when it, too, found that change was necessary” after “the West was able to create conditions . . . that forced Moscow to look to the wisdom of reaching some accommodation with the West.” That was the kind of change Nixon was talking about: getting Beijing to seek accommodation with the United States.

And it worked. Pompeo asks “What do the American people have to show for fifty years of engagement with China?” Success in the Cold War against the Soviet Union, which was aided in part by Mao Zedong and Deng Xiaoping’s decision to align strategically with the United States during the 1970s and 1980s; Deng’s “reform and opening up,” which greatly expanded U.S.-China economic and cultural relations; decades of an endless supply of inexpensive imports and an export market for American farmers and manufacturers; a gradual Chinese embrace of multilateralism and more responsible proliferation behavior; and a dramatic opening up of Chinese society compared to what it had been. The fact that some of these trends remain works in progress—and in fact have sometimes regressed—does not negate how far we have come since Nixon’s time.

Pompeo, of course, is correct when he observes that “China today is increasingly authoritarian at home and more aggressive in its hostility to freedom abroad.” He is also correct that U.S. policymakers ever since Nixon have hoped that engagement would liberalize China over time. But that was not the original or the primary goal of engagement. And the fact that this hope has not yet been fulfilled does not mean that it should be abandoned. Pompeo asks: “Did the theories our leaders proposed of China’s evolution toward freedom and democracy prove true?” No, not yet. But nor have they been proven wrong. And the Chinese Communist Party’s 2013 “Document Number 9” on “the current state of the ideological sphere” shows that Beijing still fears Western efforts to “weaken the theoretical foundations of the Party’s leadership.”

Pompeo nonetheless insists that “the old paradigm of blind engagement with China has failed. We must not continue it. We must not return to it. . . . But even now, some are insisting we preserve the model of dialogue for dialogue’s sake.” This, he says, would be replicating past mistakes because “for a long time we let the Chinese Communist Party set the terms of engagement.” This is simply wrong. Engagement was never “blind”; no U.S. administration has pursued “dialogue for dialogue’s sake” or allowed the Chinese Communist Party (CCP), to “set the terms of engagement.” Pompeo speculates that “perhaps we were naïve about China’s virulent strain of Communism, or triumphalist after the Cold War, or cravenly capitalist, or hoodwinked by Beijing’s talk of a ‘peaceful rise.’” He overlooks or dismisses the fact that there have always been policymakers in Washington—starting with Nixon—who recognized the autocratic nature and noxious character of the CCP regime, but who also recognized the limits on the United States’ ability to change that nature or to dictate China’s behavior.

One of the core themes of Pompeo’s speech, however, is his apparent belief that the United States can change the nature and thus the behavior of China’s governing regime. Indeed, the Trump administration is increasingly focused on this objective. All of the recent policy speeches have emphasized the CCP, as distinct from China or the Chinese people, as the core threat that needs to be confronted. In Pompeo’s words:

Pompeo declares that we must thwart this: “We, the free nations of the world, must induce change in the CCP’s behavior. . . . If we don’t change Communist China, Communist China will change us.” (It is worth noting here the symmetry between Pompeo’s ideological missionary zeal and that which he attributes to the CCP, whose foreign policy is arguably less messianic than his.) Moreover, “we must also engage and empower the Chinese people—a dynamic, freedom-loving people who are completely distinct from the Chinese Communist Party.” Pompeo notes, probably correctly, that “the CCP fears the Chinese people’s honest opinions more than any foreign foe. And save for losing their own grip on power, they have reason to.”

The danger here is that Pompeo appears to be encouraging the Chinese people to overthrow their government. This echoes a speech in early May by Deputy National Security Advisor Matt Pottinger, who said “China today would benefit from a little less nationalism and a little more populism. . . . When a privileged few grow too remote and self-interested, populism is what pulls them back or pitches them overboard. It has a kinetic energy.” The problem with this rhetoric is that Chinese leaders will interpret Pompeo’s and Pottinger’s messages as corroborating Beijing’s perennial claims that Washington seeks regime change in China through subversion.

Pompeo, in any event, observes that “changing the CCP’s behavior cannot be the mission of the Chinese people alone.” They will need outside help. But here Pompeo’s prescription becomes even more problematic. He focuses on the need for an international coalition to confront Beijing and pressure it to alter its behavior and, ultimately, its governing regime. But his presumptions about global support for this agenda are undermined by his miscalculation of the potential for such a mobilization effort.

On the positive side, he issues a powerful and appropriate “call on all nations to start by doing what America has done—to insist on reciprocity, transparency, and accountability from the CCP.” And he acknowledges that other countries will vary in their contributions to the cause: “Every nation will have to come to its own understanding of how to protect its national security, its economic prosperity, and its ideals from the tentacles of the CCP.”