Mira Vs. Melania: The Personal Feud That Could Reshape National Security 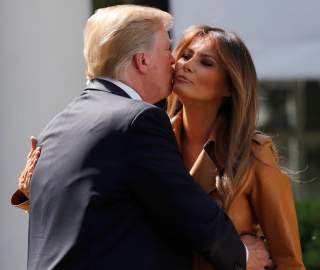 The National Interest was the first to report earlier this year that Mira Ricardel, a flame throwing Department of Commerce official and career Republican, would be joining John Bolton’s new National Security Council. The knife-fighting antagonist of James Mattis, secretary of defense, has helped shape the hawkish-nationalist foreign policy recommendations emanating from Ambassador Bolton’s office. Now on Tuesday, it looks like she could be out: swept from power by making the most unlikely and unwise of enemies—Melania Trump, the first lady.

"It is the position of the Office of the First Lady that [Ricardel] no longer deserves the honor of serving in this White House," Stephanie Grisham, spokeswoman for Melania Trump, said in a statement on Tuesday.

As of this writing late Tuesday, Ricardel remains in the employ of the administration. Earlier reports of Ricardel being escorted from the White House have been flatly denied.

Ricardel has swiftly gained a reputation in some quarters in Washington as the ruthless whip hand of her boss, Bolton. Others defend her as a loyal executor of the president’s vision: offensive realism. "Bat shit crazy but hardcore Trump," said the former official.

Her defrocking or diminishment would represent the latest round of intramural warfare in the West Wing. Mattis unsuccessfully tried to block Bolton, as I reported, from ever joining this White House; Bolton returned the favor by naming Ricardel—whom Mattis barred from a Pentagon post in 2017—his deputy. Mattis has been a presumed dead man walking in recent months, with Bolton standing to profit. But now it’s the national security advisor who looks to be on the ropes, his effectiveness potentially neutered by the recent departure of his chief of staff, the hardliner Fred Fleitz, and the imperilment of his chief apparatchik, Ricardel.

Foreign policy restrainers should be licking their chops. The appointment of Bolton and his cohort was a major setback for those hoping for an administration governed by the restrainer impulses Donald Trump showed as a candidate. Now could come a reversal. "The administration's infighting is hard to read, but on its face, the news seems like good news for Americans in favor of diplomacy and having fewer wars," says Benjamin Friedman, senior fellow at Defense Priorities. "John Bolton and his aides like Ricardel may be in good standing with the hawkish wing of the DC foreign policy establishment, but they're out of step with most Americans and even President Trump's campaign statements...If removing Mira Ricardel weakens Bolton's influence in the White House, we should all sleep a little better."

And should Bolton, spectacularly, threaten his own job security by standing up for Ricardel, he could find himself replaced by a restrainer, such as Ret. Col. Douglas Macgregor, who’s been considered before, and is liked by members of Trump’s shadow cabinet, including Sen. Rand Paul, who has tried to mold Trump’s foreign policy in a classical realist direction.

But the Ricardel brushfire could also be part of the larger battle for the future of this administration. I can report that the White House is considering replacing John Kelly, chief of staff, with Nick Ayers, Vice President Mike Pence’s chief of staff. Kelly’s ouster would likely coincide with the firing of his ally Kirstjen Nielsen, the homeland security secretary despised by influential immigration restrictionists with the president’s ear. This faction is presently still smarting from the firing of former Attorney General Jeff Sessions, long a folk hero of the populist right. But the shakeup could go even further. Kelly’s fate has long been tied to his ally Mattis, who President Trump has taken to derisively calling "Moderate Dog," not Mad Dog, in recent months. Is the president finally done with his four stars? Stay tuned.