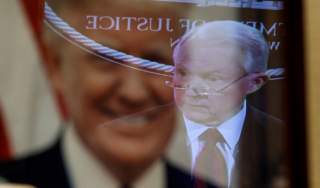 “We have a great politician here,” Donald Trump said in August 2015 at a rally in Alabama. “We have a man here… He’s the one person who I sought his counsel. Because he’s been so spot on. He’s so highly respected. Has anyone ever heard of Senator Jeff Sessions?”

The crowd roared. “Get over here, Jeff!” Trump said. “Look at him! … Unbelievable guy.”

The then-Alabama senator donned a MAGA hat. “Donald,” Sessions said. “Welcome to my hometown.” He continued: “The American people -- these people -- want somebody for the presidency who stands up for-- them. Defends their interests. And the laws and traditions of this country. … Thank you for the work you have put into the immigration issue. I’m really impressed with your plan.”

It would be six more months until Sessions formally endorsed Trump -- to the consternation of some on the populist Right -- after the Manhattan tycoon romped to victory in New Hampshire and South Carolina.

But Sessions’ early appearances with Trump marked him as the first real member of the U.S. establishment to flirt with Trumpism-- at considerable reputational risk among many of his colleagues. But he got in early. Stephen Miller -- his longtime right-hand man -- was hired by Trump that January and remains at the center of power.

The breakdown between the president and his former Attorney General represents the culmination of many of the trendlines of this presidency. Trump often favors personal rapport over fealty to his proclaimed political ideology. It’s not so much a team of rivals at 1600 Pennsylvania as it is a dorm room bull-session. This explains more than other reason why figures like Sessions and Steve Bannon -- two of the main propagators of the expressed ideology that vaulted Trump to power -- are out, while figures like John Bolton, who continues to defend the Iraq War, and Larry Kudlow, who criticized the administration on tariffs before joining it, remain.

Trump’s sacking of Sessions, whom he quickly came to despise for recusing himself for oversight of the Mueller investigation, risks enervating many of his core defenders. Many may argue that Trump’s base will stick with him until the end. But in the midterms this year, tellingly, the president did not so much close on his record and he did on the issue that delivered him the White House: immigration. “Every Republican voter I spoke to in Texas, without exception, mentioned the caravan & border security as motivating factors in their midterm vote,” MSNBC reporter Garrett Haake tweeted Thursday.

And Trump has been sensitive to criticism from the populist Right before. A former White House official called the Sessions firing “stupid hour” in a message to me; another signaled it out as a low moment for this president.

Criticism from the populist-nationalist base -- particularly from personalities Tucker Carlson and Ann Coulter -- gets the president’s attention. Critiques from them on his immigration and Syria policies are two prominent examples.

Carlson and Coulter both registered dissatisfaction Wednesday night. Sessions did his work “even as the president who appointed him attacked him. In public,” Carlson told his primetime Fox News audience. ‘If you take three steps back here’s what you see,” Carlson explained, before laying further into the White House. “In an administration beset with constant leaks and infighting, and people looking out for themselves and only themselves, Sessions was may be one of the very few people who never forgot why he was there.”

Coulter was less sparing. She told John Binder at Breitbart that now “obviously no one” is left to defend the base’s immigration prerogatives after Sessions’ departure. She also laid into Miller: “Is Stephen Miller a potted plant? Was Trump patting him on the head every time he’d insult and humiliate Miller’s former boss?”

To mollify these critics, the appointment of Sessions’ successor will be key. For some of this ilk, if the president keeps Acting Attorney General Matthew Whitaker, it will be a signal that Trump cares about self-preservation above all else. Others are more optimistic about his record. If the president considers a real hardliner -- like recently-defeated Kansas gubernatorial candidate Kris Kobach -- this will be a boon to the Coulter-Carlson crowd. A former senior administration official confirms he’s in the mix. If he chooses Pam Bondi, the former Florida Attorney General, that will be interpreted as another win for potential appointees with television bona fides. But Trump may well go to former New Jersey Governor Chris Christie, a rotating member of the president’s shadow cabinet.

For the cohort sympathetic to Sessions’ tenure, the former Attorney General represented the closest thing to a Trumpist appointee hemmed to an ideology of the new-style conservatism: as hardliner on immigration and foreign policy as the Breitbart crowd.

This contingent was plotting long before Trump strode down the escalator at Trump Tower in 2015 to announce his candidacy. Two-and-a-half years prior -- after the Republicans got their clocks cleaned in the previous election under the banner of the technocratic Mitt Romney -- Sessions, Bannon and Miller gathered in Bannon’s Capitol Hill townhouse to plot a different course. They eventually found their man. The rest is history.