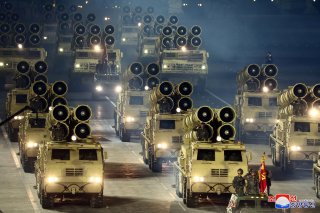 During the recent seventy-fifth anniversary of the Workers’ Party of Korea, North Korea surprised the world and revealed a new liquid-fueled Inter-Continental Ballistic Missile (ICBM) with the capability of reaching the United States, potentially with multiple nuclear warheads. This evolving threat highlights the critical importance of our homeland missile defense system and the country’s need to continue investing in missile-defense system upgrades.

However, the upgrades to the national defense contained in the Next Generation Interceptor (NGI) program may not be funded if the defense budget continues for the rest of the year under a continuing resolution. Those funds will also be negatively impacted if congressional opponents of defenses push to eliminate some of the upgrades—especially technology that can intercept multiple warheads coming at the US simultaneously.

Currently, America’s forty-four interceptors, the Ground-Based Interceptors (GBIs), are silent sentinels standing alert twenty-four/seven, in concrete silos in Alaska and California. Their mission is to fly out of their silos, find and destroy the incoming warhead. The mission is extremely complex, in fact, it is likened to the precision of a bullet hitting a bullet.

Although the existing GBI system has not been required to be used in a real-world scenario to date, the Missile Defense Agency regularly conducts flight tests to validate its effectiveness. During such tests, U.S. and allied satellites orbiting thousands of miles above the earth detect the bright launch plume of a mock enemy Intercontinental Ballistic Missile (ICBM), in this case it is a US-built ICBM target.

Each GBI carries its own advanced technology spacecraft, which is known as the Exo-atmospheric Kill Vehicle (EKV). The EKV is a sophisticated package of infrared sensors combined with advanced computers and software to distinguish the in-bound warhead from debris and decoys and guide the EKV to intercept the threat using on-board propulsion.

The GBI deploys the EKV at the optimal moment based on tracking data; the EKV then destroys the enemy warhead by striking it directly. And in six of the last seven tests the United States has been successful, a significant improvement over early tests.

To get to this system took some four decades of development that started in the Reagan administration and continued for six successive U.S. administrations. But funding has not been smooth and missile defense has not always advanced at “the speed of relevance.” Defense efforts need to be accelerated to avoid the United States emerging hostage to the whims of nuclear-armed dictators in China, Russia, North Korea, or Iran.

The good news is that in March 2019, the GBI successfully intercepted two ICBM type targets simultaneously. This was the most complex intercept test that MDA has conducted to date.

But the future requires a better capability which the NGI is designed to provide. North Korea is not the only rogue threat. Iran has successfully placed payloads in  “space,” ostensibly “peaceful space work.” But Uzi Rubin of Israel, a missile defense pioneer, says the additional development time needed for Iran to deliver warheads over intercontinental distances is minimal.

As a result, in August 2019, the Pentagon announced the start of a new program—the Next Generation Interceptor or NGI.  The new interceptor will be optimally designed as a high-performance surface-to-air interceptor, featuring increased capability and lethality compared to its predecessor.

This was part of an overall plan to upgrade existing radars and sensors, improve space-based sensors to detect and track missiles, add a defense layer to regional missile defense systems, extend and improve the capability of the GBIs, field additional interceptors and critically develop a new kill vehicle capable of intercepting multiple warheads.

NGI is scheduled for deployment in 2028. As Robert Soofer from OSD Policy stated recently: “The NGI is really the next step up.” It will carry multiple kill vehicles instead of just one, a key capability.

The NGI will be better able to process the data from our new space-based sensor layer off satellites and give a wider field of view to locate and track enemy missiles at greater range. The sensor will better discriminate warheads from other space debris, or decoys, and allow a faster response to missile threats including multiple launches—an operational tactic known as “shoot-look-shoot.”

Air Force Gen. John Hyten, the vice chairman of the Joint Chiefs, summarized our current situation in August 2020:  “I think our homeland missile defense . . . is strong, with respect to North Korea. The interceptors we have, mostly in Alaska, are highly effective against that threat. [But} they are not effective against other threats and we have to make sure we continue to advance and to take care of advancing threats in North Korea, [and] potential threats in Iran.”

Given the importance of the homeland defense mission, we must continue to invest in this critical capability. The current GBI system, though impressive, was developed under enormous time pressures using technologies from the late 1990s.  We now have the opportunity, based on decades of experience, to do the next job better with the complimentary NGI program.

Remember, the enemies of the United States are not dealing with continuing resolutions, split legislatures or budget shortfalls. They are proceeding rapidly toward the future as made clear by the new North Korean ICBM threat. Congress must provide the full funding for GBI updates and accelerate the military’s effort to develop and deploy this new NGI homeland defense capability—and bring it home on time and on budget.

Peter Huessy is the President of Geo-Strategic Analysis, a consulting firm based in Potomac, Maryland he founded in 1981.