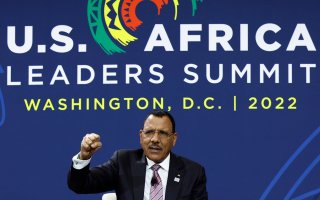 This week, President Joe Biden is hosting the U.S.-Africa Leaders Summit, the first gathering of African leaders and a U.S. president in Washington since 2014. The White House and the State Department will convene high-level discussions on everything from the power of the diaspora and creative industries to trade and investment to climate and food security—all important priorities.

Missing from the official agenda, however, is any discussion of visas, an issue at the top of mind for African governments, businesses, civil society organizations, and citizens across the continent. Enabling Africans to travel to the United States for educational, business, and cultural reasons not only benefits them but also enhances U.S. global competitiveness.

The summit should address the visa issue head-on. It’s time for the United States to demonstrate to African leaders that it truly cares about visa bottlenecks and is committed to improving the processing issues that plague the current system. Nigerian entrepreneurs seeking entry to the United States for investor meetings can face an absurd two-year wait for a visa and, thus, the opportunity to do business with Americans. Some have even turned to third countries, such as Romania, to secure visas in time for their business meetings.

Traveling to the United States has been particularly difficult since the September 11 attacks, and the Covid-19 pandemic worsened the problem, sending average wait times surging to inexcusable lengths. Take the process of getting visa appointments in Cairo, Kinshasa, and Lagos– the most populous cities on the African continent and important business hubs. The State Department currently estimates waits of 98 days in Kinshasa, 119 days in Cairo, and 666 days in Lagos. While these numbers might seem astonishing, they were much worse just a few months ago. Progress is being made by hiring new Foreign Service personnel to speed up consular processing, but the problem still demands more attention.

The negative impacts of such delays on American competitiveness are real. Visa uncertainty is hugely disruptive to key U.S. industries like tourism and tertiary education; a family in Lagos will choose to go to Dubai over Disney World. And while student visas have been slightly less affected by Covid-19 disruptions, interviews earlier this year were taking five times longer to schedule than before the pandemic. Such delays discourage African students from studying at U.S. universities and give up valuable ground to competitors in the education space. In 2014, China surpassed the United States in hosting the most English-speaking African students, with its enrollment rates growing 258 percent between 2011 and 2017. China announced 50,000 scholarships for African students in 2018, and the 2022 African Youth Survey revealed that 76 percent of young Africans see China as having the greatest positive influence in the region. And it is not just a matter of perception. Open Doors, a research and advocacy group focused on international students, has found that three U.S. jobs are created for every seven international students in the United States. While they stay in the country, African students ride in taxis, shop for computers, and eat at restaurants—all the while contributing to economic activity.

Visa headaches are at odds with the Biden administration’s desire to “foster new economic engagement” at the U.S.-Africa Leaders Summit. Venture investing has been one of the bright spots of U.S.-Africa commercial relations over the past four years. Nearly two-thirds of the twenty largest venture capital deals in Africa include U.S. investors. Moreover, according to the African Private Equity and Venture Capital Association, North America-based investors make up about 40 percent of all African venture capital deals. As global venture cools, it will be even more critical for the Biden Administration to make it as easy as possible for American investors to consider African opportunities, including by allowing the best and brightest of African entrepreneurs to easily travel to the country.

The summit offers the Biden administration a unique opportunity to advance cooperation with African partners on shared global priorities. Of course, there will be speeches promising deeper commercial ties and investment targets. But enhanced trade requires the free movement of goods, capital, and people. Transforming bold visions into reality requires getting the details right. Visas are a basic prerequisite to enhanced engagement. The Biden administration is right to acknowledge that “Africa will shape the future” and that the global competition for investment, talent, and influence across the continent is fierce. If Washington wants to remain a partner of choice in business, education, and cultural collaboration, serious efforts must be made to welcome Africans to the United States.

Aubrey Hruby is a nonresident senior fellow with the Africa Center, co-founder of Insider and the Africa Expert Network (AXN), and an active investor in African start-ups.