How Biden Can Transform Africa Posturing into Progress 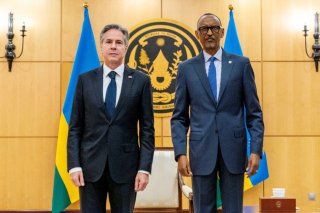 On December 13, leaders from across Africa will converge on Washington, DC, for the U.S-Africa Leaders’ Summit. President Joe Biden deserves credit for seeking to re-center Africa in American foreign policy. For too long, the United States has failed in Africa for three reasons.

The first is a failure to compete. China, Russia, Turkey, and Iran scrambled to win allies and influence. The United States, in contrast, has been passive. It takes allies for granted and seldom gives the continent sustained attention.

The second is arrogance. Too often, American policymakers are on transmit rather than receive. They prefer to tell African governments what they need rather than listen to the priorities of African governments. Climate envoy John Kerry can lecture Sierra Leone and Liberia on climate change, for example, but it should not come at the expense of programs to strengthen judicial and police capacity and financial transparency. The same is true with the State Department’s focus on transgender rights. Whatever one thinks about an issue that U.S. authorities classified as a mental illness not long ago, it is questionable whether that should be at the forefront of embassy efforts when so many more national security issues loom.

Finally, is a tendency to ignore African solutions to African problems. The United Nation’s five most expensive peacekeeping operations are in Africa but with few exceptions fail. In recent years, Rwanda has pioneered a new model in which they marry Rwandan bilateral forces to UN peacekeepers.

All three American mistakes are on display in the Great Lakes region of Africa. Secretary of State Antony Blinken and USAID administrator Samantha Power treat Rwanda unfairly. They have consistently embraced a false Hollywood narrative in dissonance with reality and deferred instead to irrational progressive animus toward the small African state.

Domestically, President Paul Kagame, over the course of his twenty-two-year tenure, has undertaken a generational project to erase the eugenics-influenced social order imported by the Belgians more than a century ago and the French cynicism that led to the 1994 anti-Tutsi genocide, the nature of which Blinken and Power still refuse to recognize. Kagame’s efforts to build a new Rwandan identity not beholden to ethnicity or historical baggage are something that diplomats should encourage the replication of in countries like Ethiopia and Nigeria. In the space of just two decades, Kagame has further defeated corruption and transformed a country in ruins into a regional Silicon Valley. In effect, Rwanda is today Africa’s Israel or Singapore.

That Kagame has accomplished this without the welfare and colonial dynamics at the heart of the Western non-governmental organization community increases activist animosity from groups like Human Rights Watch and Amnesty International, less because of human rights or democracy concerns and more because Rwanda’s success threatens their model. True, Rwanda is far from perfect, though the democracy criticism is overwrought: Rwandans believe a culture of enunciating differences during election campaigns contributed to genocide. In response, they have embraced a culture of consensus that is apparent not only on the national level but also at an individual level on the street. Seldom do Rwandans, for example, raise their voice at each other in anger or otherwise. This is not to say Kagame has made no mistakes; however, any comparison between Rwanda and neighbors such as Burundi and the Democratic Republic of Congo shows that the Rwanda model works. Rather than bludgeon the country, the West should partner with it to ensure that the gains achieved by Kagame survive any eventual transition. It could start by sending an ambassador. It took Biden and Blinken a half year after the departure of the former ambassador to nominate a successor; as the Congressional term ends, he has yet to receive a vote. No symbolic conference in Washington can substitute for the fact that the State Department and Senate have failed in their most basic responsibilities.

The problem is broader. The ally bashing in Africa comes at a high cost. By encouraging Felix Tshisekedi, president of the Democratic Republic of Congo, and addressing his manufactured complaints against Rwanda through a lens of moral equivalence and “bothsiderism,” Blinken and Power have taken the region to the brink of a new genocide. Had Hollywood’s anti-Rwanda obsession not blinkered Blinken, he might have realized Tshisekedi was seeking to use ethnic animus to distract from his own failings ahead of elections in the Democratic Republic of Congo. The UN compounds the problem by allowing terrorist groups and unrepentant Hutu génocidaires effectively to run its refugee camps by remaining armed and transforming schools, UNRWA-style, into incitement centers. As many in Africa increasingly suggest, it would be better for the UN to leave than be an incubator for terror.

It is essential the United States emulate Rwanda’s zero-tolerance policy toward terror for a simple reason: A Rwanda at peace with its neighbors is a force multiplier for peace in the region. Rwandan contingents in Mozambique, the Central African Republic, and South Sudan demonstrate this. The European Council recognizes this, and so should the Biden administration.

Diplomatic platitudes will not help Africa. Each Rwandan deployment costs perhaps $1 billion, still a bargain compared to the United Nations. The European Union falls short because it restricts its aid packages to the non-lethal. That might be good if deploying a peacekeeping mission along the United States-Canada border, but it does not work for Africa. What Rwanda needs is assistance with strategic airlifts, armored personnel carriers, civilian armored vehicles, and fuel. The United States cannot and should not deploy everywhere in Africa, but Rwandans would welcome U.S. Special Forces assistance to train and equip Rwandans heading into conflict zones. This would be a case of training the trainers. Rwandans could pass along the lessons and capacity in a way the United States cannot or will not do directly. Further support for Rwandan and regional staff colleges would amplify the pattern. Think: A Marshall Center for Africa in Kigali and/or Accra, and Olmstead scholars focused on Africa to increase capacity in a way Biden’s conference never can.

Rwanda does not have the natural resources to allow it great excesses and discretionary budgets. Accordingly, the United States and other Western countries could also support Rwandan peacekeeping and bilateral deployments with both per diems for police and soldiers, and assistance to the families. None of this would be charity; it would prevent further backsliding of African security and democracy in a way more efficient and less expensive than either the United States or United Nations would be capable. It denies space to the Wagner Group or other conflict exploiters.

In both Cabo Delgado and in the Central African Republic, where most fuel and supplies must come via a single road from Cameroon, improvised explosive devices (IEDs) are a growing threat. With the United States withdrawn from Afghanistan and no longer actively patrolling vast swaths of Iraq, much of the Pentagon’s counter-IED capacity is sitting in warehouses. The Rwandans could use these, bomb-sniffing dogs, and training to render IEDs safe to great effect.

The idea is not to dump weaponry on a problem; decades of disaster show that to be poor policy. Rather, it is to get behind and support those capable of positive action rather than mere posturing. The United States has a role to play in supporting those in Rwanda, Kenya, Malawi, Ghana, Morocco, and Somaliland willing to take the counter-terrorism, counter-extremism, and counter-genocide fight forward.

A conference in which symbolism trumps substance may feel good, but it will leave no lasting legacy. Unfortunately, the coming summit appears short on strategic coherence. It is time Washington learn from its mistakes, encourage African success stories, and work through African partners to reverse the contagion of instability and extremism making a comeback on the continent. The way forward is not through conferences or dumping money and responsibility upon the United Nations. Rather, it is through careful diplomacy not beholden to disaffected exiles and through military partnerships. In each case, Rwanda is key.