Rwanda Should Be the Model to Defeat Corruption 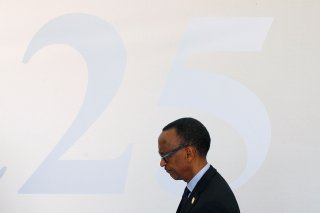 While terrorism affects dozens of people each year, corruption impacts billions. The U.S. government acknowledges as much. “Around the world, corruption saps economic growth, hinders development, destabilizes governments, undermines democracy, and provides openings for dangerous groups such as criminals, traffickers, and terrorists,” the State Department notes, adding, “The Department of State has made anti-corruption a national security priority and works across the globe.” Honoring anti-corruption champions a month into his tenure, Secretary of State Anthony Blinken reiterated the importance of anti-corruption efforts and declared, “The Biden administration recognizes that we will only be successful in combating these issues by working in concert with committed partners.”

While Blinken has inaugurated an award to honor anti-corruption champions, it appears more symbolic than actual, with recipients who were carefully chosen to check regional, religious, and gender boxes. Meanwhile, Blinken’s indulgence of notoriously corrupt governments like Somalia’s appears to be unchanged. Many of the greatest recipients of U.S. foreign assistance are, according to Transparency International rankings, among the world’s most corrupt. Jessica Trisko Darden, a political science professor at American University, has shown convincingly a direct relationship between the amount of aid provided to developing countries and increases in state violence within them.

Few countries have successfully overcome dysfunctional corruption, but there are exceptions. When Georgia regained its independence upon the fall of the Soviet Union, corruption reigned supreme. Georgians spoke about kanonieri qurdebi, “thieves-in-law,” who hijacked the government. Mikheil Saakashvili, while minister of justice under President Eduard Shevardnadze, inaugurated a series of law enforcement reforms. Following the 2003 Rose Revolution, Saakashvili rose to the presidency and actively targeted corruption and organized crime. The World Bank praised Georgia’s reforms and the decline in bribery of public officials. Elite corruption, however, persists and, in the last decade, there has been significant backsliding as rulers consolidate power, cut deals with senior judges, and effectively captured and manipulated the state for their own benefit. At the very best, Georgia’s anti-corruption reforms have stalled, even if the situation remains far better than under Shevardnadze. Still, across the broad sweep of its history following the Soviet collapse, Georgia’s success is remarkable. It went from a country ranked worse than Albania, Nicaragua, and Venezuela in 2002 to a country on par with Poland and St. Lucia in Transparency International’s most recent report.

Other countries are models for success. Botswana has largely tackled corruption despite being a single party monopolizing government for the last fifty-five years. In 2001, Transparency International ranked Botswana to be Africa’s least corrupt country in 2001, on par with Portugal and slightly better than Italy, it too has slid back in recent years. In Asia, Singapore provides perhaps the best practices. It consistently ranks among the world’s least corrupt countries on par with Switzerland and Sweden, all of which score much better than the United States a status it has held since Transparency International began its rankings a quarter century ago. In 2016, Prime Minister Lee Hsien Loong identified reasons for Singapore’s anti-corruption success: They had inherited a clean and functional system from British colonial authorities, worked not only to preserve the system but also to augment it with an enhanced legal framework, and, finally, ensured over time that abhorrence of corruption infused culture.

There has been no country that has achieved more stark success, however, than Rwanda. The site of an anti-Tutsi genocide in 1994, Rwanda might have descended into the cycle of retribution and state failure in which many other post-conflict states remain mired but, instead, incumbent president Paul Kagame made reconciliation with those not directly involved in genocide and the eradication of corruption his priorities. As University of Quebec-trained conflict expert Jean-Paul Kimonyo outlined in his masterful Transforming Rwanda, beginning in January 1995, then-Defense Minister Kagame began reintegrating soldiers and even senior officers from the Forces armées rwandaises, the Rwandan army leading up to the genocide,  into the new Rwandan Defense Force. In March 1999, Rwanda launched the National Unity and Reconciliation Commission. Just as with Iraq, Western human rights groups like Human Rights Watch objected to Rwanda’s efforts to manage its own post-genocide justice system, although their concerns seem motivated more by a desire to preserve their and the UN’s central role in the genocide justice industry than in fairness or fact. Diaspora groups, such as those surrounding ex-hotelier Paul Rusesabagina, may sponsor terrorist groups, apologize for genocide revisionists, and downplay subsequent political compacts, but reconciliation is both real and apparent.

That reconciliation laid the groundwork for Kagame, who assume the presidency in April 2000, to prioritize the fight against corruption. Whereas Transparency International once ranked Rwanda on par with Russia and the Philippines and suffering worse corruption than Yemen, Libya, and Iran, today, Kagame has virtually eradicated major corruption and Rwanda ranks on par with the Czech Republic and better than Italy and Greece.

Whereas Singapore inherited good governance models from British colonial authorities, Rwanda did not. Kimonyo details how Rwanda reformed or dismantled compromised inherited institutions. In November 1997, Rwanda’s post-genocide authorities established a National Tender Board to replace a contract-award system rife with corruption. The Rwanda Public Procurement Authority replaced this board in order to further decentralize and make the contracting process more independent. The Rwanda Revenue Authority reformed tax collection and to end privileges which politicians, prominent businessmen, and senior military officers had previously enjoyed. The Bureau of the Auditor General followed quickly, charged with uprooting corruption in state-owned entities. Almost immediately, it moved six thousand ghost employees off the public payroll and removed an equal number of unqualified employees. A Parliamentary Public Accounts Committee convened in 2011 to ensure follow-up to audit reports. An Office of the Ombudsman, meanwhile, not only monitors officials’ wealth and property but also gives ordinary Rwandans recourse against abuse of power. An examination system helped eradicate academic corruption and promote meritocracy. High-profile corruption prosecutions demonstrated that Kagame was serious. Also like Singapore, Kagame has focused on changing culture. Regular surveys chart youth attitudes toward the acceptability of corruption to better calibrate educational campaigns.

Blinken, like his predecessors, can castigate corruption as a talking point, but rhetoric alone will not resolve its crippling effects around the globe. Instead, it is time the State Department recognizes solutions do not rest in simple solutions, study groups, or reliance in international organizations more interested in justifying jobs for their members than in finding solutions. As Somalia, Lebanon, and Iraq show, too much aid corrupts, especially when countries lack the capacity to spend it productively. Instead, if the State Department, the U.S. Agency for International Development, and Congress are interested in defeating the scourge of corruption, it is crucial to identify what works and encourage its replication. While the United States spends billions of dollars on counter-terrorism operations, it can point to few examples alone in which counter-terror alone has brought stability to a country. For an expenditure several orders of magnitude less, it could facilitate the travel of anti-corruption specialists from other countries to Kigali to learn not only the winning formula, but also to recognize how a no-nonsense approach to public graft increases wealth, peace, and stability for all.