What Tony Blinken Conveniently Left Out of His Family’s Story 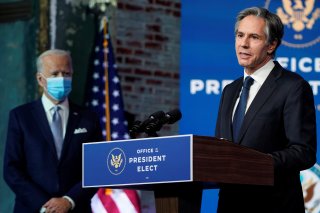 Joe Biden’s Secretary of State nominee Antony Blinken made waves in late November with a powerful account of his stepfather’s rescue from a Nazi concentration camp at the hands of a U.S. tank battalion, but the full story paints a more complex picture of entangled postwar commitments.

At a Nov. 23 event introducing Biden’s first wave of national security picks, Blinken devoted the better part of his prepared remarks to an overview of his family’s history as refugees. Discussing his grandparents’ flight from Communism, Blinken then turned to his stepfather Samuel Pisar: “And my late stepfather, Samuel Pisar, was one of 900 children in his school in Bialystok, Poland, but the only one to survive the Holocaust after four years in concentration camps,” said Blinken. “At the end of the war, he made a break from a death march into the Bavarian woods. From his hiding place, he heard the rumbling sound of a tank. Instead of an Iron Cross, he saw a five-pointed White Star. He ran to the tank. The hatch opened. An African-American GI looked down at him. He fell to his knees and said the only three words he knew in English that his mother had taught him: ‘God Bless America.’ The GI lifted him into the tank, into America, into freedom. That’s who we are.”

Blinken’s account of his stepfather was widely circulated as part of a broader wave of overwhelmingly positive coverage of Biden’s cabinet picks, with CNN notably publishing an in-depth profile of the African American tank battalion in question. Nevertheless, Blinken omitted the central aspects of the story.

Samuel Pisar was born in 1929 in the northeastern Polish town of Białystok. His parents were educated in a post-partition Polish territory that had been part of the Russian Empire since the early nineteenth century—they attended a Russian school, spoke Russian, and were part of the overarching Imperial Russian cultural sphere. After a brief interregnum between the two world wars, the nascent Second Polish Republic was again partitioned under the Molotov-Ribbentrop pact. Białystok initially fell under Soviet control, his father’s local taxi business was nationalized, and a young Pisar was sent to a Russian-language school where he joined the youth division of the Soviet Communist Party and developed an interest in Russian literature—many decades later, he said that he is still able to quote Russian poets Pushkin and Lermontov by heart.

Białystok was occupied by the Germans in 1941. Amid massacres against the Jewish population, Pisar’s father was arrested and executed for taking part in a resistance group and Samuel was transferred along several concentration camps throughout the war. He was evacuated from Auschwitz to Dachau following the Red Army’s westward offensive. While on a death march near Munich, he said that he and fourteen others fled into the woods after a ground strike by an American bomber squadron that allegedly mistook his four-thousand-man prisoner convoy for German soldiers. He was rescued by the U.S. Army shortly thereafter.

Blinken told his stepfather’s story as a tale of one-sided U.S. beneficence, but Samuel Pisar remembers it differently: “I was saved by the Battle of Stalingrad, which was the turning point of the war, and the Red Army offensive,” he said in a 2010 interview with Russian media outlet RIA Novosti. “For me, during the Second World War, Russia was a savior. I consider my saviors to be the Russian and American armies. You can criticize Stalin, the Gulag, and other things that happened in Russia from 1920 to 1930, but the heroism, sacrifice, and victory of Russia in the war against Fascism cannot be questioned. It’s sacred.”

He later told the story of a young Russian soldier who was beaten to death after being caught trying to escape Auschwitz. “A Nazi officer came to kick the stool from down under him. Suddenly the soldier jumped up and kicked the officer the face—we later found his teeth on the ground. And then he [the Russian soldier] died. This unbelievable heroism changed something in me.”

Pisar went on to become a scholar and international lawyer, earning doctorates from the Sorbonne and Harvard University and advising the John F. Kennedy administration on economic and foreign affairs. In a modus operandi that may well have gotten him labeled as a Kremlin asset in today’s political climate, Pisar devoted the better part of his career to advancing the cause of U.S.-Soviet rapprochement. “After the fall of the Berlin Wall, I thought that America and Russia would become partners, and maybe allies. I am still studying this and writing about it. Everything started out well, but it was all ruined shortly afterward—it was agonizing for me,” he said.  Throughout his decades-long career, Pisar met with Soviet General Secretary Leonid Brezhnev, Premier Alexei Kosygin, General Secretary Mikhail Gorbachev, the first Russian President Boris Yeltsin, and—through his work as advisor to International Olympic Committee President Juan Antonio Samaranch—Russia’s current leader Vladimir Putin. He recounted participating in numerous tense diplomatic negotiations as a political advisor: “The confrontation was very dangerous at the time, but we managed to overcome it because there were cool heads in both Moscow and Washington.”

His landmark 1970 book, Coexistence & Commerce: Guidelines for Transactions between East and West, reflects the détente-era optimism among some American elites that the Western and Communist spheres can not only co-exist, but cooperate across a wide range of policy fronts. Pisar advocated for the systemic and far-reaching dissolution of western barriers to west-east trade, coupled with a serious understanding of Soviet economic-financial institutions and what they mean for western businessmen.

Pisar remained hopeful in his later years, following the Soviet collapse: “I think the electric shock in the relationship is a thing of the past, and I hope that the new discharge is going in the right direction,” he said, one year after the ill-fated 2009 reset between Washington and Moscow. Pisar passed away in 2015.

In stark contrast to the relentless rollback and simplistic confrontation championed by the incoming Biden administration, Pisar dedicated his life’s work to the vision that the United States and Russia’s Soviet predecessor can set aside their differences in order to rebuild a shattered postwar world. Perhaps this is the family legacy, unfashionable as it may be among today’s Washington foreign policy establishment, to which Antony Blinken can repair.