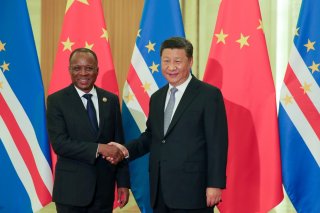 On June 26, President Joe Biden and the other leaders of the G7 launched the Partnership for Global Infrastructure and Investment (PGII). The aim is to mobilize a total of $600 billion by 2027, of which the United States will provide $200 billion. The purposes of PGII as outlined by Biden are to deliver sustainable infrastructure to developing countries, diversify supply chains, create new opportunities for American workers and businesses, and strengthen our national security. On this last point, though not explicitly mentioned, the aim is to counter China’s ambitious Belt and Road Initiative (BRI). Indeed, the major task of “developing, expanding, and deploying secure information and communications technology (ICT) networks” is directed at Beijing’s Digital Silk Road whose strategic implications are profound. The first item listed on the White House PGII Fact Sheet is a $2 billion solar project in Angola, China’s main source of oil imports from Africa.

Sub-Saharan Africa is seen as a major theater of competition between the PGII and BRI. Beijing pledged $60 billion in 2018 to projects on the continent. Only a few days before the G7 announcement, the eleventh annual meeting of the China-Africa Think Tanks Forum opened in Beijing at which a large number of ongoing Chinese operations were discussed in addition to BRI, perhaps the one with the most notable title being the “100 Companies in 1,000 Villages.”

The desire to compete with China in Africa is not new. However, the ability to do so is based on an exaggerated view of U.S. economic interests in the region. And without a foundation of economic interests, it is difficult to sustain political support for major expenditures of taxpayer dollars in the region. This is reflected by Biden’s emphasizing the use of private capital in the PGII. This was also the core of President Barack Obama’s 2013 Trade Africa initiative which sought “to increase internal and regional trade within Africa, and expand trade and economic ties between Africa, the United States, and other global markets.” Its focus was the East Africa Community (EAC) comprising Burundi, Kenya, Rwanda, Tanzania, and Uganda which was thought to be a high-growth area. Yet, 2013 proved to be the peak year for U.S. exports to the EAC. By 21017, exports had dropped by half.

In 2018, the Trump administration launched its “Prosper Africa” strategy with the explicit aim of countering China. It also downplayed government funding. As U.S. Agency for International Development (USAID) administer Mark Green stated at the fourth Annual Powering Africa Summit, “We’re embracing the notion that the private sector, not donors and governments -- but the private sector -- will be the ultimate driver and sustainer of development, and we know that we need to re-envision our role accordingly.” Yet, American economic interests in Africa have been declining, not expanding.

America’s main economic relationship with Africa has been oil, but those trade ties peaked in 2011. The U.S. trade deficits in goods with the four largest African suppliers of oil in 2011 were: $28.9 billion with Nigeria, $12.1 billion with Angola, $3.1 billion with Chad, and $439 million with the Democratic Republic of the Congo. Yet, Nigeria was only the 44th largest market for U.S. exports; Angola ranked 69th and the DRC was 136th. Exports to Chad were so low the U.S. trade representative did not bother to rank them. African states prefer to buy their imports from Europe (culture) or China (price) rather than from America. By 2017, the goods deficit with Africa had dropped to $10.8 billion. This was due entirely to a reduction in oil imports, from $93 billion in 2011 to $24.9 billion in 2017. U.S. goods exports to Africa had also decreased over these years, down from $32.9 in 2011 to $14.1 in 2017. In 2021, U.S. exports to Sub-Saharan markets totaled only $16.5 billion.

As the United States increased its own oil production through fracking, it was imports from Africa that took the largest hit. While it was once argued that oil would be the central arena of conflict between the United States and China, the competition faded as America withdrew. China and India picked up the slack. Today, Nigeria still ranks as the ninth-largest source of oil imports from the United States, but at only 110,000 barrels per day at the end of 2021, it was just slightly ahead of South Korea.

In contrast, China-Africa trade increased by 35 percent last year to a record high of $254 billion, compared to U.S. trade of $44.7 billion. Beijing gets about 15 percent of its oil imports from Sub-Saharan countries. Yet, China ran a surplus with Africa whereas the United States ran a deficit. Beijing concentrates much more attention on paying for its oil, food, and raw material imports with manufactured exports than Washington does. China is also shifting more to state and private enterprise to advance development in Africa rather than direct government funding. At last year’s Forum on China-Africa Cooperation (FOCAC, established in 2000) held in Senegal, President Xi Jinping reduced his 2018 pledge to only $40 billion to the continent, though he proclaimed how “Almost all African members of FOCAC have joined the big family of Belt and Road cooperation.” He also pledged China will “encourage its businesses to invest no less than 10 billion US dollars in Africa in the next three years.” Given Africa’s huge shortfalls in infrastructure investment essential to the development of the Africa Continental Free Trade Area (ACFTA), which is the current framework for advancement, these Chinese sums are quite modest, encouraging the G7 the act.

The ACFTA is consistent with U.S. policy rooted in the 2000 Africa Growth and Opportunity Act which unilaterally opened the American market to Sub-Saharan African exporters to support their domestic expansion, though the focus of the ACFTA is integrating the African market. U.S. strategy has been to encourage African development as an end in itself. Any gains would come later as a result of that development. Beijing’s focus has been on developing Africa as an appendage to the Chinese economy in the traditional pattern of imperialism: trading manufactured goods for fuel, food, and raw materials and investing for the benefit of Chinese firms including even creating jobs for Chinese workers who have been transplanted to Africa. This asymmetrical approach gives Washington an advantage that can be used to push back against Beijing’s political influence on the continent.

China’s investments in Africa and dependence on its oil and other resources make it vulnerable. Political volatility and pushback against Beijing’s greed, exploitation, racism, and explicit rejection of human rights will raise the political price of its investments and risk drawing in substantial security forces to protect those interests. While Africa needs humanitarian assistance and foreign investment, its leaders must be able to channel growth to benefit their own people and resist becoming victims of a new imperialism.

The United States can compete with China in influence across the continent by presenting itself as a genuine friend of local authorities in their desire to maintain national independence and to root out the corruption Chinese money breeds. Thus, Biden’s use of the terms “values-driven” and “transparent infrastructure partnership.” This is nation-building at the institutional level. While the American message in aid and training programs has long emphasized democracy and human rights (values the rejection of which Beijing tries to sell as “non-interference” and an advantage in dealing with Africa), it must also build a sense of national consciousness and higher loyalty that can recognize and resist the pressures to abandon the common good to the benefit of foreign interests. Likewise, the United States should help African states understand that predatory “debt traps” which cede strategic assets or compromise telecommunications networks will jeopardize their national sovereignty.

An overlooked element of “soft power” is the U.S. military. Africa Command (USAFRICOM) was stood up in 2008 and has strong ties with African militaries based on facing common insurgent and smuggling threats. These can be broadened to face another truly existential danger. USAFRICOM is well positioned to provide political support to African national governments that want the confidence to constrain Chinese ambitions and guard their own freedoms. It is a “whole of government” organization including personnel from more than ten U.S. government departments and agencies, including the Departments of State and USAID, giving it the depth and scope to partner with a multitude of local authorities.

A goal of U.S. training of African officers and non-commissioned officers is “to increase the ability of foreign military and civilian personnel to instill and maintain democratic values.” Its promotion of professionalism based on “honor, duty, country” can counter the temptations of avarice.

American policy has been to discourage African states from spending scarce resources on weapons. However, when African governments choose to improve their military capabilities, the United States should make a strong effort to be the source of desired equipment and the training that goes with it. American restraint has opened the door to Russia to become the leading arms exporter to Africa. Moscow’s poor showing in Ukraine should lessen its appeal as a military partner. The void should be filled by Washington, not Beijing.