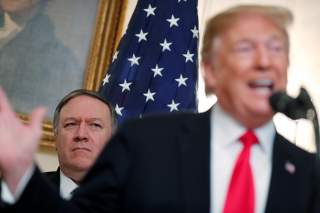 The hunt was on, again then, for Foggy Bottom’s face.

For the second time in less than three years, the State Department was left with a sporadic staffing situation in its press operation, under the department’s third secretary in less than three years. Mike Pompeo’s Democratic predecessor, John Kerry, prized press access—some said the veteran Washingtonian was too camera-ready—while both Pompeo, and before that Rex Tillerson, have largely limited official briefings: from closer to daily to closer to weekly. In this respect, the State Department has mirrored the White House, post–Sean Spicer.

In communications, Kerry’s Democrats installed government veterans, such as former Pentagon spokesman Rear Adm. John Kirby, and relied heavily on career Foreign Service Officers like Mark Toner, who logged some service for the Trump administration in early 2017. But the Republicans helming State, ejecta of a big-bucks media landscape, have rolled out, as in other places in the administration, alumni of Fox News, the de facto triple-A ball club of the government.

True to form: Nauert will be replaced, it was announced this week, with Morgan Ortagus of Fox News. But make no mistake: Ortagus is no lightweight—neither was Nauert. Nauert’s candidacy for UN ambassador was maligned as a cynical appointment by a president who is an atheist on expertise. This is not a complete picture: Nauert, though lacking an interstitial command of statecraft, helped steady the rocky ship of a department in transition. Like Brian Hook, the crafty Iran Study Group chairman, Nauert survived the transition from Tillerson to Pompeo, and in the process of doing so, helped Foggy Bottom, to an extent, get its swagger back.

But Ortagus comes to the job with a richer CV: an active Navy reservist, with past stints at the Treasury Department and the State Department’s own USAID. The concern on Ortagus isn’t that she isn’t ready, the concern is that she’s a hawk—one with an anti-Trump past, contributing further to this administration’s collective cognitive dissonance, further producing policy divorced from the president’s political mandate. Unlike the rest of the government, Mike Pompeo’s house has become a hall of NeverTrump in recent months. Ortagus—who in 2016 lambasted candidate Trump’s “isolationist foreign-policy approach”—is another log on the fire. She joins Elliot Abrams and Mary Kissel on a seventh floor that feels more Wall Street Journal editorial board than Breitbart or The American Conservative; indeed, Kissel comes from the Wall Street Journal.  Such choices for Pompeo, who will eventually seek the presidency, have not come without some cost among the “MAGA” faithful, where his reputation among some activists has flagged in recent months.

But in more ways than one, Ortagus is the quintessential Pompeo pick. The secretary has elite—West Point and Harvard—roots. Also, he is thoroughly networked in more established strains of conservatism—a Tea Party Congressman who meant business, a representative of the Koch brothers’ Wichita, Kansas, district. But like almost no one else, Pompeo has played ball and has earned the unrivaled respect of the president. Former White House chief strategist Steve Bannon once told me that Pompeo, while at the CIA, was perfect—in essence, a more advanced version of Sen. Tom Cotton, sometimes touted as the future of Trumpism, but who still needed the neocon wrung out of him.

Ortagus seems to be following her new boss’s lead, retiring old official allegiances and working her way through the president’s adherents. A welcome party was held for her at a Trump loyalist’s home in Virginia Thursday night.