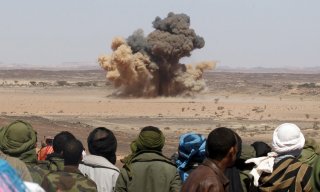 As the Biden administration focuses on renewed nuclear diplomacy with Iran, it runs the risk of missing clear signs that the Iranian regime is stepping up its activism in a crucial strategic theater: North Africa. That’s the warning I heard in Rabat, Morocco’s capital, where I traveled earlier this month at the invitation of the country’s foreign ministry.

With a review of U.S. policy toward the North African nation now underway, with ongoing unrest in nearby Libya, and with rising instability in the adjacent Sahel region, the kingdom’s strategic agenda is already quite full. All of this made the degree of concern among local policymakers over what they view as an Iranian strategic offensive on the continent all the more striking. “It’s no longer accurate to just speak about Iran in West Africa,” one high-ranking official told me. “The Iranians are all over the continent now.”

The Iranian regime, I was told, is building a sustained regional presence via the creation of cultural centers and informal contacts throughout the continent, leveraging the significant—and sympathetic—Lebanese diaspora that exists across various African nations. There is also credible evidence that Iran is working with radical regional groups. For instance, working through Lebanon’s Hezbollah militia, Iran has supported the leftist Polisario Front since at least 2017. (This cooperation was so worrisome that the Kingdom formally severed diplomatic relations with Iran in 2018 as a result.) Polisario delegations are also known to have traveled to Lebanon for training, security experts said. Likewise, Iran now has a significant presence in neighboring Mauritania and nearby Tunisia, and is believed to be actively carrying out recruitment in both places.

That pattern of activity is deeply familiar. It closely mirrors Iran’s earlier efforts of roughly a decade-and-a-half ago to penetrate Latin America and create a “support arena” in the Western Hemisphere to help it skirt international sanctions, shore up relations with sympathetic anti-American regimes, and erect a latent operational capability that could be mobilized against the United States. The results of that asymmetric activity were striking. As Joseph Humire of the Center for Secure Free Society and I have documented, by the early 2010s Iran had succeeded in erecting a web of irregular relationships and arrangements throughout the Americas. These ranged from financial dealings that helped ease U.S. economic pressure to contacts with regional radicals which made possible no fewer than three separate Iranian-organized or -inspired plots against the U.S. homeland between 2007 and 2012. Now, it seems, this pattern of penetration is being replicated in Africa.

What drives Iran’s new activism? Moroccan officials point to a number of factors. The first is strategic opportunism, as the African continent grows in global economic and political significance. The second is a regime effort to ease the pressure of the Trump administration’s “maximum pressure” policy, which succeeded in significantly (and adversely) impacting the Iranian economy over the past two years. Third, and perhaps most concerning in a local context, is that Iran has been significantly more interested in Africa since the killing of IRGC Qods Force commander Qassim Suleimani in January 2020—heightening fears among local officials that Tehran could eventually exact retribution by targeting U.S. interests or allies on the continent.

All this has generated mounting concern in Rabat, which has stepped up its efforts to monitor Iran’s activities and those of its chief proxy, Hezbollah, in its immediate neighborhood. The Islamic Republic’s desired end state, Moroccan officials are convinced, is two-fold: to consolidate control over the continent’s Shi’a Muslims and use this cohort as a political lever to shape regional politics, and to create a latent operational capability through which it can retaliate against the United States.

For the Biden administration, the warning couldn’t be more timely. Since taking office in January, the new White House has made re-engagement with Tehran a top foreign policy priority. And like that of the Obama administration before it, this effort has prioritized some sort of settlement over Iran’s nuclear program ahead of attention to Iran’s other malign activities. If the signals coming out of Rabat are any indication, however, that could end up being a costly mistake, as Iran’s radical regime erects an African presence capable of threatening America and its local partners.